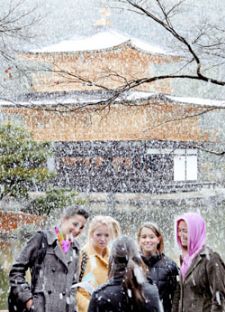 January 18, 2008, Greencastle, Ind. - A photo of four DePauw University students is featured on the front page of today's Japan Times. The image of Kristina Lubinski, Courtney Griffen, Julie Southworth, and Jessica Hollar is accompanied by the text, "Visitors pose for photos in front of Kinkakuji Temple in Kita Ward as the gold-covered building received its first snow of the year Thursday."

The students are among a group of undergraduates enrolled in the Winter Term project, "Cool Japan! Its Language and Culture." The course is being led by DePauw professors Hiroko Chiba and Eugene Gloria.

A synopsis of the class asks, "What images does the word 'Japan' bring to mind? We may each have our own perceptions about Japanese society and culture based on books, technology, martial arts, Hollywood movies, and media such as Anime or Manga as well as the nation's history and traditional arts. As you may be able to tell already, softpower and traditional culture comprise a major component of the Japanese image. In this project, we will explore this image -- the 'Japanese cool' -- by living with Japanese families and visiting Tokyo and Kyoto."

Read more here, and see the photograph at the Japan Times online.

DePauw University continues to be one of the top colleges in the United States for the percentage of students who study abroad, according to Open Doors 2007, which was released in November. Details can be found in this previous story.