April 30, 2008, Greencastle, Ind. - Vernon Jordan, a 1957 graduate of DePauw University, is one of the producers of Thurgood, which officially opens today at Broadway's Booth Theatre. A one-man show based on the life of the late civil rights figure and Supreme Court Justice Thurgood Marshall, the production stars Tony Award-winning actor Laurence Fishburne.

"Thurgood made its premiere in 2006 at the Westport Country Playhouse," notes Playbill. "That production ... starred James Earl Jones as Marshall, who died in 1993."

The show tells "the remarkable and triumphant story of Thurgood Marshall, who rose from a childhood in the backstreets of Baltimore to the Supreme Court of the United States," according to the production's press notes. "Along the way, Mr. Marshall overcame many adversities but through them all, remained focused and positive to maintain the great country he wanted to serve. And did. Thurgood brings to the stage the words, the wit, the tenacity and 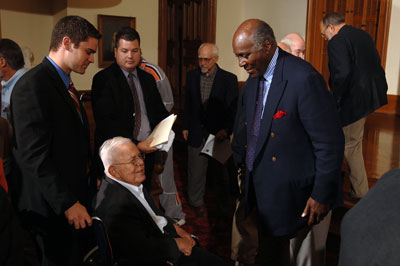 the wisdom of one of America's greatest heroes." (at right: Jordan greeting Robert H. Farber '35, vice president emeritus and professor emeritus of education at DePauw)

Vernon E. Jordan Jr., senior managing director of Lazard Fréres & Co., is former president of the National Urban League and advised Presidents Clinton and Carter. An advisory member of DePauw's Board of Trustees, Jordan appeared on the cover of the February 2008 issue of Black Enterprise magazine.  He is scheduled to deliver the spring convocation address at the University of Texas at Austin's LBJ School of Public Affairs on May 17.

Jordan's address to DePauw's Class of 1993 is embedded below.