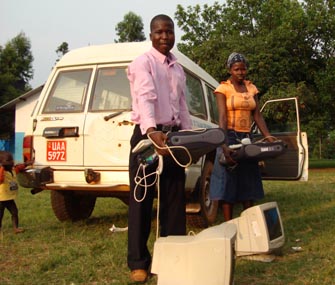 August 15, 2008, Greencastle, Ind. - DePauw University's Community Technology Enhancement Program (CTEP) -- which collects used computers from the university, local schools, and the community to be refurbished and donated to low-income families and nonprofit organizations -- has extended its outreach to Uganda. Three students and a medical facility in that country now have computers as a result of CTEP's ongoing efforts.

Last month, Sharon M. Crary, assistant professor of chemistry, traveled with 2008 DePauw graduate Cody Shoemaker to northern Uganda, where they served alongside doctors and nurses at Lacor Hospital. The pair brought along four refurbished computers which were generously donated by the CTEP program.

The recipients of the devices included three young scholars -- two who are medical students, the other an education major -- who had grown up as orphans at St. Jude’s Children’s Home and were raised and supported by Brother Elio Croce, an Italian Comboni Missionary. As one of the 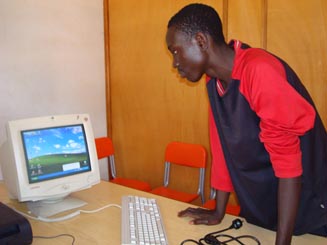 recipients, Ojok Denis, explained, “I appreciate [CTEP] for donating the computer because it is going to facilitate my educational process.”

“Now that I am in the university, I need a computer for various reasons, including storing class notes and personal academic documents,” says another recipient, Opiro Kenneth, who plans on becoming a general surgeon in the future.

A fourth computer was broken in transit to Uganda and was unable to be given to a student. Luckily, due to the craftsmanship of Brother Croce, the computer was restored and now is used in the radiology department at Lacor Hospital.

Learn more about CTEP in this previous story.