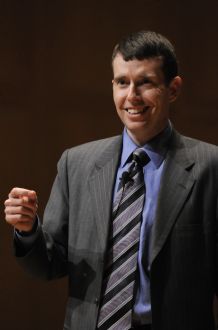 [Download Video: "The Improbable Upset" - 1104kb] "You cannot understand who he is, who we were as a campaign, without understanding how improbable all of this was," David Plouffe, manager of Barack Obama's presidential campaign, told an audience at DePauw University tonight. "There has never been a bigger political upset in modern political history, maybe in all of political history. It's hard to reconcile that with now he's on the stage, he's been elected president, he's serving as our president -- but 2 years ago this seemed like something that would have the lowest of odds and a lot of things would have to happen right."

Just thirteen days after the inauguration of President Obama, Plouffe discussed "Leadership Lessons from a Presidential Campaign Manager" in a Timothy and Sharon Ubben Lecture. A crowd of about 700 -- including students from DePauw, Purdue, Ball State and Indiana universities -- gathered in Kresge Auditorium of DePauw's Green Center for the Performing Arts to hear from the man 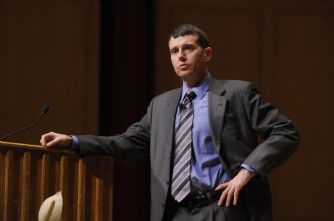 Obama called "the unsung hero of this campaign, who built the . . . best political campaign, I think, in the history of the United States of America."

Plouffe recalled his first discussions with Obama about the possibility of a run for the White House after the 2006 congressional elections, describing the then-U.S. Senator as a man "who did not have a pathological desire to be president ...

[Download Audio: "The Beginning" - 238kb] And I did not know then if he would be a good presidential candudate. The reason I'd work for him is I thought he had a chance to be a very good president, but, in some respects those are two different things. He ended up being an outstanding presidential candidate, but I think in many ways he's much better suited to the presidency, even in these 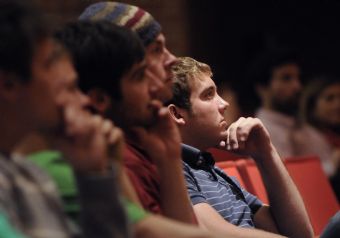 times of crisis, than the presidential campaign because of his style and his intellect."

Plouffe, who has worked on a variety of campaigns since 1990, took the helm of his first national campaign when he agreed to lead Obama's presidential bid.

[Download Audio: "An Improbable Journey" - 606kb] "People forget 2 years ago he wasn't even announced for president. And 2 years before that, he had been a state senator in Illinois. And here he was going up against the strongest front-runner in our party's history in a time of war."

The lesson that can be drawn from the Obama's campaigns beginnings is "don't see things as they are right now; kind of imagine what they might be," Plouffe offered. As the "improbable journey" began, the Obama team developed a plan that was carefully considered and followed consistently over the months that followed. "Very early, Barack Obama knew exactly what he wanted to say. If you look at his announcement speech, it is very similar to what he said on the night of November 4," when he was elected president. "His message really did not change," says Plouffe.

A "clarity of focus" and "structure in hierarchy" were also pillars of a campaign which Plouffe says was determined to ignore the "stale playbook of how to run for president" that had been used by candidates for decades.

[Download Audio: "Pathways to Victory" - 395kb] "We were confident enough as an organization -- and a lot of this was based in research and data, it wasn't just flying by the seat of our pants -- to not accept those old nostrums." According to Plouffe, "We've all gotten accustomed to every 4 years, on the first Tuesday in November, to looking out and seeing how Ohio and Florida are going to vote. And we were tired of that, and we thought that we to create as many pathways to victory as possible, so we'd wake up on November 4th and could say, 'Well, if we win Florida, we win. If we win Indiana and Colorado, we win. If we win Virginia and Montana, we win.' A lot of different combinations to get there."

To build bases in each state, Plouffe and his staff used the Internet, text messaging and other forms of communication to build and grow a now-legendary grassroots network of organizers and volunteers.

[Download Video: "The Domino Effect" - 1232kb] "It was a domino effect," he said tonight, "and we believed in the power of people to really try and change their country. Now it grew to a scale that we could not have imagined in our wildest dreams: 13 million people, 4 million contributors, 6 million volunteers. Think about that. Thirteen million people are on our e-mail list; that was 20% of the people who voted for Barack Obama." Plouffe says, "So that belief in people that really came from Obama really, I think, made a big difference."

Plouffe began his address by stating,

[Download Video: "Plouffe's Welcome" - 696kb] "It is good to be in Indiana, which is blue on that electoral map for the first time in far too long." The Hoosier state, usually the first to be declared for Republican presidential 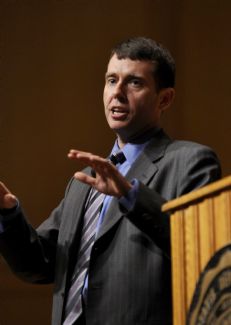 candidates in each election, went Obama's way in 2008. It was the first time a Democrat carried the state since Lyndon Johnson in 1964.

Indiana was the last of 18 states put on the Obama campaign's battleground list and "the state we wanted the most," Plouffe said tonight.

[Download Audio: "People Power" - 562kb] "The notion of us winning Indiana without a grassroots campaign is just completely nuts," Plouffe asserted. "If we had run a lot of TV ads here and the candidate came occasionally and we had a decent field operation, we would've lost by 6 points. We wouldn't have won Florida, we wouldn't have won Ohio. We had millions of people out there who were giving us money they couldn't afford to give, time they didn't have to give. Half of the people who gave money or volunteered for our campaign had never done so before in American politics. Think about that, that's a shocking number."

The man called "the mastermind behind a winning strategy" by the Chicago Tribune went on to say,

[Download Video: "The Untold Story" - 1215kb] "What has never really been properly appreciated by the press, this grassroots campaign wasn't about how many calls we made or how many doors we knocked on, it was the quality of those contacts. See, if I talk to my circle of people I know every 2 years, they kind of 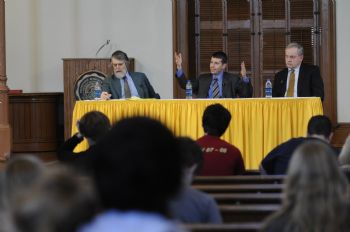 tune me out about politics 'cause I'm gonna say 'Vote for this Democrat, you know, this is a great guy.' But if it's someone in your circle whose never raised their voice about politics before, who might not even have been registered before, who's an independent or Republican who's passionate about a Democrat for the first time -- that has an enormous impact."

Plouffe's day at DePauw began with a student forum, which was moderated by Bruce Stinebrickner, professor of political science, and David Bohmer '69, director of the Eugene S. Pulliam Center for Contemporary Media. The session, held in Meharry Hall of historic East College, provided an opportunity for students to ask questions about Obama campaign strategies and the electoral process.

The visitor's next stop was the Pulliam Center, where he to 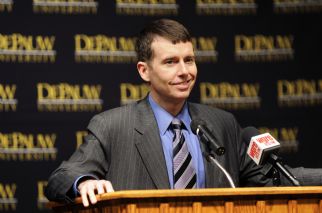 ok part in a news conference. Audio of the session can be accessed here.

Plouffe was introduced at tonight's Ubben Lecture by David R. Dietz, a DePauw sophomore who is president of the University's College Democrats and an Obama campaign volunteer.

The campaign made its share of mistakes, Plouffe admitted -- among them, he says the Clinton team was the first to focus its messaging on economic issues. He also noted, "We could have won the Texas primary and didn't, which doesn't seem like a big deal now but could have cost us the presidency," he declared. "We probably started targeting some states like Georgia and North Dakota a little early; we should have just focused on that next tier of Indiana, North Carolina and Virginia. All of these things do not look like big things now, but they were then."

The calm, self-assured Barack Obama that the public got to know was the same man Plouffe saw consistently throughout the campaign's peaks and valleys. 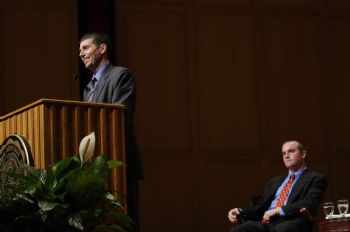 is someone who commits to a strategy -- again, is willing to adjust tactics, but he won't throw something overboard just because the chattering class or pressure internally gets too itense. He's very resolute. He thinks long-term. That's why today, even when we're dealing with this economic crisis, he is committed to doing the longer-term things on energy we need to do to put this country on the right track. Things, by the way, that won't be evidenced for years and years, if not decades."

Plouffe continued, "Washington doesn't like to do a lot of things that don't have immediate benefit to them in the next election, so this is going to be a big challenge. But he thinks long term; it's one of the prime reasons he ran. We've got these big, festering problems -- competitiveness, energy, health care -- that Washington just keeps kicking down the field. And he will consider his presidency a failure if he has not put us on the road to progress" on those issues, the campaign manager said to applause from the audience. 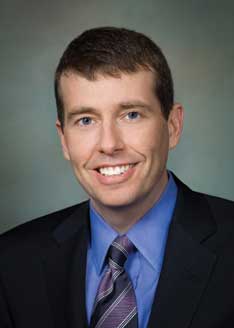 Plouffe's experience with the Obama campaign

[Download Video: "Young Voters" - 1336kb] "has given me a huge amount of confidence in the future and the belief that younger voters, younger people in this country, are willing to do something beyond themselves -- if they're asked properly, if they're motivated, if they're trusted. And I think one of the reason younger voters gravitated to Obama -- some of it was generational -- they thought he was not B.S.ing them, they thought he was being honest with them and understood the future of the country a little better than some of the other candidates. But I think they also got the sense that as a campaign we trusted them, we believed in them, that in many ways our futures and destiny were tied together: we would only do as well as younger voters took us."

The resume of David Plouffe (pronounced "Pluff") includes stints as a state field director for Tom Harkin's unsuccessful 1992 presidential campaign and a strategist for Richard Gephardt's failed 2000 bid for the White House, directing successful campaigns for the U.S. House of Representatives and Senate and Massachusetts 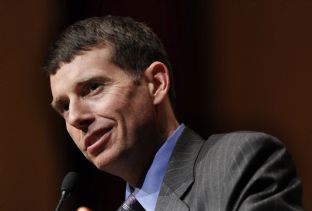 For the moment, Plouffe is taking a break from politics and offering his help to the White House as needed, and is determined to spend time with his wife and two small children after a grueling stint on the presidential campaign trail kept him away from home. "It was a brutal 2 years, but worth every second," he says. His plans also include penning a book, The Audacity to Win and he's helped launch Organizing for America, a grassroots campaign network which will work to mobilize volunteers to improve their communities and support policy in Washington. 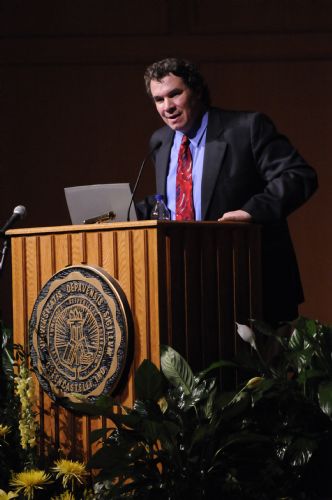 The Ubben Lecture Series was created in 1986 by a gift by Timothy and Sharon Williams Ubben, both 1958 graduates of DePauw. Designed to "bring the world to Greencastle," it brought humanitarian Greg Mortenson (seen at right), author of Three Cups of Tea: One Man's Mission to Promote Peace ... One School at a Time, to campus November 13, and will welcome veteran journalist Jane Pauley on April 17. 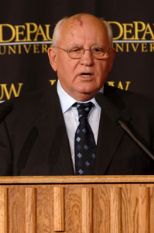 To view a complete roster of Ubben Lecturers, which includes links to video clips and news stories, click here. Video montages of many guests are available on YouTube.