In early March, Karen Koning AbuZayd returned to DePauw's Janet Prindle Institute for Ethics for the Humanitarian Intervention Symposium, where she and a group of international human rights experts discussed the responsibility of nations to intervene abroad for humanitarian purposes. A 1963 graduate of DePauw, AbuZayd's work as commissioner-general for the United Nations Relief Works Agency (UNRWA) has earned her the respect of people most of us would call Sir or Madam, but she knows them as Tony (Blair, former British prime minister) and Hillary (Clinton, secretary of state). For a person who has risen to such great influence, she remains accessible and willing to engage a perfect stranger. Perhaps her work necessitates such flexibility; to succeed in 30 harrowing years of helping refugees fleeing from disease, famine and war demands an uncommon level of humanity.

"I think that, for some people who get into refugee work, it's a passion. For others, it's an obsession. It's all we talk about, whether we're together or we're at home with our families," AbuZayd says.

AbuZayd tells the story of the beginning her career with the United Nations like it happened by accident, but it might have been her heart that led her there. Even while earning a degree in nursing at DePauw, much of her extracurricular time was spent in seminars on political science. She continued her interest while off duty as a health clinic nurse in Chicago, taking night classes that began her interest in Middle Eastern affairs. Certain she'd found her calling, she enrolled in an Islamic studies program at McGill University in Montreal. It was there that she met her Sudanese husband, a fellow graduate student. Following graduation, the couple traveled to Africa to teach—first in Uganda, then in his native Sudan.

In 1981, while teaching at the University of Juba in southern Sudan, a representative of the United Nations High Commissioner for Refugees (UNHCR) asked AbuZayd if she would work with him to select Ethiopian refugees for college scholarships. 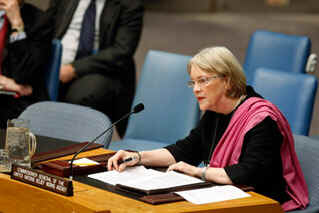 The new job quickly consumed her life. During the next 18 years, AbuZayd moved upward through UNHCR's ranks, attending to humanitarian concerns in Namibia, Sierra Leone, South Africa and Bosnia. In 2000 AbuZayd became an assistant secretary-general of the United Nations and deputy commissioner-general of the United Nations Relief Works Agency. Five years later, Secretary-General Kofi Annan appointed her to lead UNRWA.

Established in 1949 in the aftermath of the 1948 Arab-Israeli War, UNRWA's duty is to provide aid – economic assistance, social services, education and healthcare – to Palestinian refugees living in the Middle East. The agency has since grown into the UN's largest employer with 28,000 employees staffing UNRWA's warehouses, clinics and schools. Nearly all of these workers are Palestinian, and many have children who attend UNRWA schools that teach conflict resolution and human rights. Their involvement as both recipients and providers of aid has given the Palestinian people a vested interest in the success of the UN's mission of peace.

Today, more than 4.6 million Palestinian refugees are registered with UNRWA in five locations: Gaza, Jordan, Lebanon, Syria and the West Bank. Only 6 percent of them are considered hardship cases requiring emergency aid, such as food or water. The rest are self-reliant, going about daily life in a way that mirrors most others in the region. Some live in camps, indistinguishable from a small city filled with multi-story buildings and homes. In Jordan, where AbuZayd estimates that two-thirds of the population is Palestinian, refugees are granted a slightly restricted citizenship, and refugees in Syria live alongside the general population. While these alternatives have provided stable conditions for the refugees, Palestinians insist that their circumstances are temporary.

"The refugees don't really want to be citizens of another country," AbuZayd says. "Right now, they are waiting for a permanent, final status solution. Until a UN resolution says that they have the right of return or compensation, they and their descendants will continue in this state." 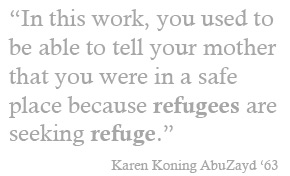 In Gaza and the West Bank where territorial authorities have little power, UNRWA bears much of the burden for maintaining and resupplying the infrastructure. The recent conflict in Gaza left tens of thousands of families with damaged or destroyed homes that the agency must help rebuild.

"Aside from the people whose houses were destroyed – and we can't do anything about that until we can get materials into Gaza – many homes had their windows shattered from the bombs," says AbuZayd. "There have been constant rainstorms and families are living under sheets of plastic. Last week, many children didn't come to school because they didn't have dry clothes. The saddest thing is that all of the private sector – every single factory and workshop – was destroyed. Anybody who was working has to start all over."

Tit-for-tat military engagements have defined most recent Israeli-Palestinian relations. The public outcry following each episode has made piecemeal negations hard for either side to follow. "Each side is waiting for the other to take one step forward," AbuZayd explains, 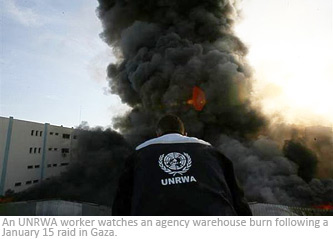 "but a single rocket moves the process 12 steps back." In January, George Mitchell, whose work in Northern Ireland led to the signing of the Belfast Peace Agreement, was named as the United States' special envoy to the Middle East. She believes his presence will make a "big difference," noting that most other foreign intermediaries have only flown in once a month and rarely visiting the war-torn towns and camps of Gaza.

Following the symposium at DePauw, AbuZayd traveled to Lebanon to the ruins of the Naher El Bared camp, turned to rubble by the Lebanese army when Fatah al-Islam terrorists hid among 30,000 refugees. There, she placed the foundation stone of the first house to be built since the camp's destruction two years ago. UNRWA's rebuilding efforts will return the displaced families to the houses they need, but the refugees will continue to be without a home.

"The refugees make the most of what they've got, but they're miserable," says AbuZayd. "I often think about not being able to go home. I haven't lived in the United States for over forty years, but I always have something to go back to."