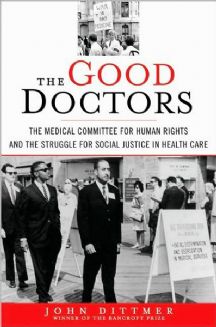 May 10, 2009, Greencastle, Ind. — "The Good Doctors by prize-winning historian John Dittmer tells the heroic, and previously overlooked, story of an organization that stood at the barricades in every civil rights struggle from Selma to Chicago to Wounded Knee, battling inequality and racism in the medical profession while setting up clinics that today reach hundreds of thousands of underserved patients," states David Oshinsky, winner of the 2006 Pulitzer Prize in History. Dittmer's new book, The Good Doctors: The Medical Committee for Human Rights and the Struggle for Social Justice in Health Care, is being published this week by Bloomsbury Press. Dr. Dittmer, professor emeritus of history at DePauw University, received the Bancroft Prize and several other awards for his 1994 work, Local People: The Struggle for Civil Rights in Mississippi.

The Good Doctors tells the story of the Medical Committee for Human Rights, a group of health care professionals active not only in the Deep South at the height of the civil rights movement but also as part of the New Left during the late 1960s and 1970s. It provides an insightful and inspiring account of a group of idealists who put careers on the line for their belief that "health care is a human right." Dittmer's book tells the story of these doctors and nurses for the first time.

"Occasionally, but all too seldom, a book captures perfectly a neglected but extremely important subject," states James H. Jones, author of Bad Blood: The Tuskegee Syphilis Experiment. "The Good Doctors is cause for celebration. It revives a little known chapter of the civil rights movement by telling the story of a group of courageous Northern physicians who risked their lives and their careers to provide medical care for the casualties among the civil rights protesters in the South as they fought to end segregation and claim their rights as citizens. Those same doctors also fought valiantly to end segregation in the medical facilities of the South and to provide medical care to poor people who had been neglected shamefully by the medical profession. Deeply researched, brilliantly conceived, beautifully written and unsparing in its analysis of every character who walks across its pages, The Good Doctors is a triumph of passionate scholarship and balanced judgment."

Adds Tony Horwitz, author of Confederates in the Attic: Dispatches from the Unfinished Civil War, "In this era of racial healing, The Good Doctors is a shocking reminder of how recently Jim Crow reigned over medical care in America. Well into the 1960s, many hospitals and doctors' offices remained segregated, with blacks given separate and grossly unequal access to beds, waiting rooms, and other basic services. Dittmer tells the tale of the courageous few in the medical profession who fought racial injustice and went on to many other battles in the 1960s and early 1970s. Freedom Summer, Selma, the anti-war movement, Alcatraz, Wounded Knee; they're all here, in this tour of a turbulent and inspiring time that speaks forcefully to our own."

Oshinsky, who authored Polio: An American Story, declares,"Those who think themselves familiar with the civil rights movement in the United States are in for a welcome surprise ... The Good Doctors should be required reading for every American who views quality health care as a basic human right."

Alvin F. Poussaint M.D. of Harvard Medical School opines, "This book is a historical landmark. Dittmer's chronicle of civil rights health care workers is captivating. All of us need to appreciate these brave pioneers."

Learn more about The Good Doctors, and order the book, at the publisher's Web site.

Professor Dittmer's Local People: The Struggle for Civil Rights in Mississippi received the Bancroft Prize, generally considered the most prestigious award in the field of American history writing. The book also received the McLemore Prize and Lillian Smith Book Award, and the New York Times named it one of the "notable books of 1994" in the history category.

John Dittmer served on the DePauw faculty from 1985 until his retirement in 2003 and has been selected by a committee of seniors and faculty members to present this year's commencement address, next Sunday, May 17, at 1 p.m. (EDT) in Holton Memorial Quadrangle.