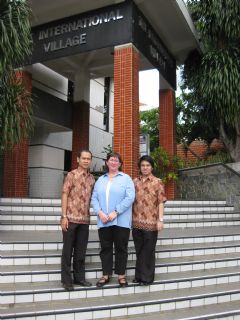 Living in another country can be an exciting and exhilarating experience. Learning to understand a different language, culture and the speed at which others live their lives adds to the richness of the experience as well as to the challenges of living abroad.

Michele T. Villinski, associate professor of economics and management, had been to Indonesia previously and was thrilled to have the opportunity to return in March as a Fulbright senior specialist. Villinski was familiar with the Indonesian language and culture because she lived there several years during her childhood and vacationed there twice as an adult.

Villinski received the prestigious Fulbright Scholarship last fall. Click here to read an announcement of her award. She recently returned from Indonesia where she was a visiting Fulbright senior specialist at the University of Surabaya (UBAYA). Surabaya is located approximately 400 miles east of the capital city, Jakarta, and it is the second most populous city in Indonesia.

While chatting with a taxi driver on her daily commute from her hotel to UBAYA, the driver asked Villinski to describe her hometown, Greencastle, Ind. “When I told the driver the population, he was shocked,” Villinski said. “He wanted to travel to Indiana with me to see for himself. He couldn’t fathom its size and said, ‘10,000 people live in one city block in Surabaya!’”

Choosing Indonesia was easy for Villinski because she has memorable experiences living there as a child. Her father worked for the United States Foreign Commercial Service and helped to promote trade between the United States and Indonesia. Villinski also lived in Morocco, Saudi Arabia, Malaysia and the Philippines.

The Institute of International Education/Fulbright Program Web site states, “the Fulbright Program aims to increase mutual understanding between the peoples of the United States and other countries, through the exchange of persons, knowledge, and skills.” Villinski says, “It was very important to me to advance the mission of the Fulbright program while living in Indonesia. That was my goal.”

Villinski says, “It was a really good time to be in Indonesia. For example, I saw many positive things about the U.S. in the media, and I was really well received by the people I met. I regularly had political conversations because of the upcoming Indonesian elections in addition to our recent election.” Villinski also notes, “Many people shared their political views, and so many said with pride, ‘Oh, President Obama, he’s a Menteng boy!’” Villinski explains, “Menteng is the neighborhood in Jakarta where Obama lived for several years as a child.”

Villinski taught classes in environmental management, microeconomics for business and management, and international business. “While I was teaching at UBAYA, I gained perspective on all of the advantages that I have teaching at DePauw and came to respect the resource challenges which teachers, students and administrators in many developing countries face.” Most professors at UBAYA teach part-time and have other jobs to supplement their income. Often, several professors team-teach one course, dividing the semester among them. Few professors have had the opporutnity to earn a Ph.D.

The students spoke a limited amount of English, and Villinski was prepared for the challenge. She taught her classes in a mix of English and Indonesian with the help of Power Point presentations in Indonesian. She spoke mostly in English but wrote on the board in both languages. Students appreciated her being there, and they thanked her after each class. The economics department at UBAYA is not able to offer a class in environmental economics so Villinski's expertise was especially welcomed by both students and faculty.

Having set office hours to meet with students is not common for professors at UBAYA. However, Villinski thought it was important and wanted the students to know that she was available. “I felt that the one-on-one interactions were an important part of my role there,” she says. She also used the time on campus to establish relationships with faculty and staff members.

In addition to her teaching responsibilities, Villinski worked with chemical engineers at UBAYA's Center for Environmental Studies, consulting on future projects, cost-benefit analysis and economic viability of programs. She also conducted a seminar on environmental economics and corporate social responsibility for more than 150 local business people and representatives of local government.

When asked if she noticed any visible changes in the country since her last visit more than 10 years ago, she says, “The most noticeable difference is the general availability of Western goods, including fast food.” The other major change is transportation, “There are motorbikes everywhere, even though the traditional becaks or rickshaws are still widely used.”

Villinski's husband visited for a week during her stay in Surabaya, and they spent time traveling throughout the city and the nearby countryside. A highlight was a trip to Mount Bromo, an active volcano located 90 miles south of Surabaya.

Villinski has plans to share her Indonesian experience with children in the local Greencastle schools – a place where she is no stranger. She has volunteered extensively at Ridpath Primary School and Tzouanakis Intermediate School during the last five years. “I feel so fortunate to have the flexibility in my schedule to be able to assist teachers in the classroom. I’m looking forward to talking to the kids about Indonesia.” Villinski also hopes to share her experiences with the DePauw community when she returns from sabbatical in the fall.