Documentarian with a Cause 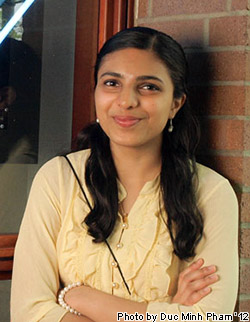 She was named after one of India's most sacred landmarks – one that was recently deemed the national river of India and provides water for more than 400 million Indians. This same river also suffers from more pollution than any other river in India, containing industrial sewage, dead bodies and household garbage. Sophomore Ganga C. Devaiah wanted to bring to life environmental concerns surrounding India's most utilized body of water – the Ganges River.

"This river is special to Indians. It is the most holy river for Hindus, and people use it for every ritual, from marriages to funerals," Devaiah said. The river is a goddess in Hindu myth, and many people wash themselves and the bodies of their loved ones to purify their souls. When people cannot afford proper burial or wood for cremation, she says they sometimes dispense deceased loved ones into the river. Many superstitions about the river also lead to further pollution, such as its reputed healing power for the ill, and sacred animals such as cows are placed in the river.

"They revere this river, but it's so polluted that it's killing them," she said. The largest sources of pollution are untreated industrial and domestic waste. Organizations such as Eco Friends have been working with lawmakers to clean the river by creating programs such as the Ganga Action Plan and pushing to ban the disposal of any pollutants into the river. 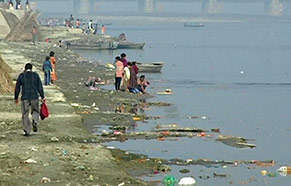 Devaiah joined in the cause by participating in a DePauw Winter Term Independent Study project through Eco Friends, who helped her make a documentary on the subject.

"I was always interested in film and those kinds of mediums. It's a good way to propagate your ideas," she said. "I really wanted to do something about this problem in the world, so this seemed like a good avenue for my interests." She decided to convey her message through film because it would reach out to a broader audience and allow others to see the damage with their own eyes.

"If I just did research, I'd forget about the importance of the issue, and people won't always see it," Devaiah said. "With film, people get to visually go there and see it for themselves. Environmental problems move around so easily, from the air to water – it never stays in one place. It's a cycle."

Since she arrived on campus in 2007, Devaiah has been involved in D3TV and has served on its board of directors as director of promotion and outreach as well as the director for scheduling and operations. 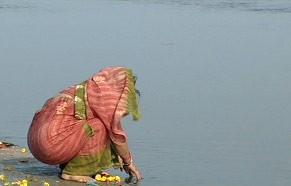 She hails from Burma, now officially called the Union of Myanmar, and has been studying in the United States for two years. She hopes to spread awareness of environmental concerns outside of the United States to students at DePauw.

"I wanted to bring something to DePauw that was international. I wanted people to see something beyond America," she said. "Environmental issues are for everyone, not just people interested in the environment."

Before becoming involved with D3TV, Devaiah had no prior film experience. She learned the ins and outs of filmmaking from working at the D3TV station and her freshman Winter Term course, Making a Scene.

"I had zero video experience before coming in," she said. Making a Scene introduced me to all this video editing and filming." With a major in economics and minors in conflict studies and geosciences, Devaiah looked at the project through a variety of lenses. She found the documentary very interdisciplinary, involving conflict studies, political science, anthropology, earth sciences, communication and economics.

She chose to feature a number of perspectives on the issue but found that they converged on the same idea: the river needs to be cleaned. 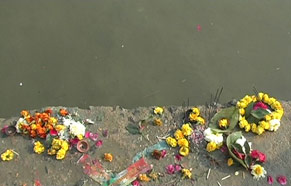 Devaiah interviewed farmers, boatmen, a professor working on the Ganga Action Plan, a priest, workers who perform cremations, her supervisors and a chemist from a water treatment plant.

"Everyone wants improvement because it's so important to the people of India," she said.

Devaiah plans to continue exploring environmental issues through film and hopes her documentary will open people's eyes to the problems and solutions at hand. "It's our cultural heritage. It's essential to our Indian identity, and it's being destroyed."

During Earth Week, the DePauw Environmental Club featured her documentary in a special showing, and the Information Technology Associates Program showed the film for its culture series in late April. Director of Television Operations Larry Abed provided his insight during the production process and helped Devaiah get the necessary equipment to shoot the documentary.

"As soon as I saw it, I thought she should enter it in a contest. For someone with little experience with shooting and editing, I thought it was done very, very well," Abed said. "She has a great ability to put you in that place through music and images. She not only showed the problem/solution part, but she gave us insight to the country through the images she used, and it really added to the piece."