June 8, 2009, Greencastle, Ind. — The work of Sherry J. Mou, assistant professor of modern languages (Chinese) and Asian Studies at DePauw University, "examines the role and development of women in Chinese society and literature, specifically focusing on Confucianism," notes Indonesia's Jakarta Post. The publication provides a report on Mou's public lecture at the University of Indonesia's Humanities School, which took place on May 25, as well as an interview with the professor.

Dr. Mou is asked if Western feminism can be applied to Chinese society. "No, not without moderation," she responds. "Western feminist theory is closely related to the 19th century Western society. Although many concepts are useful, you cannot apply them without moderation. Even the word feminism has sparked complaint from many people. One could say: women-how, women-ism, women power-ism or women gender-ism. A lot of women activists in China do not want to be called feminists. They behave like feminists, but they reject the title. They don't want to dominate men. The public calls them 'feminists' and then people think they want to grab power. People think women want to be as powerful as men. Feminism is not all about power, just a few parts of it."

Feminism, she adds, "is about equality. 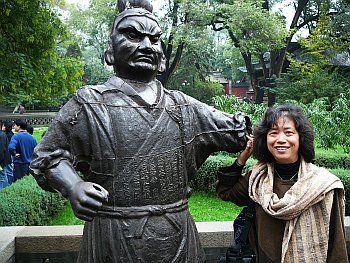 Why do we study women? It is because women are still being oppressed. Women are still underestimated. You have to study gender relations. It is not about power."

Links are available to the interview and the summary of her lecture., in which she discussed the portrayal of Chinese women in film.

Sherry Mou is the author of Gentlemen's Prescriptions for Women's Lives: A Thousand Years of Biographies of Chinese Women. Learn more about her in this story.