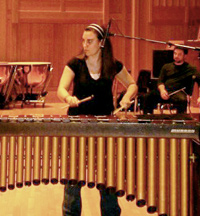 While many DePauw students were celebrating the completion of another school year and settling in for relaxing summers at home, Bridget C. Parker '11 was practicing for the percussion performance of her dreams. An instrumental music education major in DePauw's School of Music, Parker was selected for the National Collegiate Wind Ensemble in late October and spent months preparing for the May 24 concert.

The words "Carnegie Hall," printed in bold on a flier posted in the DePauw School of Music sparked Parker's interest in the Ensemble early during the fall semester.

"It's been my dream to play there ever since I was a little girl," Parker shares. "I immediately talked to Dr. Paré [Professor of Music Craig T. Paré] and asked him all about the program and filled out an application right away."

After submitting her application, which consisted of essays, letters of recommendation and an audition tape, Parker waited two weeks before receiving notification of her acceptance in late October.

"I received my acceptance letter in the mail when I was home for a break and literally was jumping and screaming all around the house," she recalls. She noted that fellow DePauw percussion student Peter J. Meyer '12 also was accepted into the program.

Although the concert wasn't until May, Parker was constantly corresponding with administrators for the Ensemble, making room arrangements for the trip and organizing parts for concert pieces.

"I had been preparing music for the performance since February," she says, "Our final parts were assigned to us when we arrived in New York, and we had three full days of rehearsal before the performance." 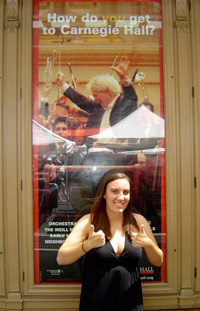 Performing with the National Collegiate Wind Ensemble at Carnegie Hall was a well-deserved honor for Parker, who has been playing percussion instruments, ranging from the marimba and snare drum to the timpani and crash cymbals, since the fifth grade - a total of 10 years.

"[Carnegie Hall] just captivates you. It was such a rush looking out into the five-tiered audience and seeing every single person on their feet in applause. It was one of the most rewarding experiences of my life, and I will never forget it," Parker shares. "This was truly a once-in-a-lifetime experience."

As a student in the DePauw School of Music, Parker is under the instruction of Professor of Music Amy Lynn Barber, and she participates in a percussion studio, percussion ensemble and the University Band, under the direction of Paré. Outside of the School of Music, she is the vice president of programming for Delta Gamma sorority. In order to balance her courses, extracurricular activities and practice, Parker admits that she has been forced to make sacrifices.

"Being a music major is a very time consuming responsibility," Parker shares, "You have to practice, meet for ensembles, go to classes and do other course work. It's certainly not a walk in the park. There are times when my friends want to make a trip to Indianapolis, and I have to say no so I can get my work finished. I don't mind it, because music is something that I really love."

Although her work with the DePauw Music School is on hold for summer break and the Ensemble performance has passed, Parker continues to be involved with music. This summer, she is playing in the Michigan City (Ind.) Municipal Band, assisting with her hometown Munster (Ind.) High School marching band's drum line, substitute teaching in a local school district, and taking a chemistry class at Purdue University Calumet. She is also preparing for a performance in the pit orchestra for a professional production of High School Musical 2 at the Star Plaza Theater in Merrillville, Ind. The production will be the premiere of High School Musical 2 in the state.

When she graduates from DePauw in two years, Parker hopes to pursue a career in music education at the middle school level. Until then, she plans to continue playing percussion at DePauw and beyond.