July 15, 2010, Greencastle, Ind. — Orcenith Smith, professor of music and director of orchestras at DePauw University, will serve as guest conductor for the seventh annual Indiana University-Southeast String Clinic, July 18-24, in New Albany, Indiana. The 50 students who participate in the week long clinic are in grades 7-12 and are auditioned from the Louisville and southern Indiana area. They are taught during the camp by area professionals including members of the Louisville Symphony Orchestra. This is the fifth consecutive year that Smith has been invited to guest conduct.

"I am so honored to conduct the cumulative concert for these young musicians," says Smith. "In the all-important work to sustain string education year round, these music teachers have remained vigilant to keep this kind of camp going. Maintaining continuity in the months in between school programs with an all-day focus can certainly sustain and even accelerate the young musicians' learning," adds the professor. " It is quite exciting to step into the teachers' 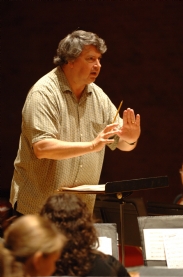 and young musicians' process at this point."

Earlier in the summer, Smith was guest conductor for the Wisconsin All-State Honors Orchestra, his third time invited to conduct the selected group of 120 musicians from that state. He also conducted an another string camp, "Strings and Jazzy Things," in Indianapolis. Inner-city string students are the main focus of that program, coordinated by the Philharmonic Orchestra of Indianapolis, and funded by the Lilly Endowment, Indianapolis Foundation, the Indianapolis Symphony Orchestra, and Indianapolis' St. Paul's Episcopal Church.

You're also invited to visit the DePauw University School of Music online.