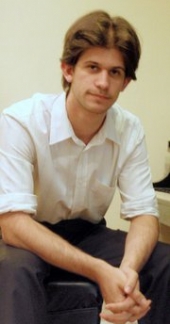 June 28, 2011, Greencastle, Ind. — "We've got a great young guy in his early 20s, creating music on the spot, embracing rock music as well as classical," says Eric Edberg, professor of music at DePauw University, of pianist John Kamfonas, who will perform as part of the Greencastle Summer Music Festival Wednesday. An article in the Banner-Graphic notes that Kamfonas' repertoire may range from Franz Liszt to Michael Jackson.

"Many performers of his generation find it natural to combine different genres of music in one event. They don't necessarily think of it as classical music or rock music -- it they love it, it's just good music," exclaims Edberg.

"John is one of the young 'next generation' professional musicians I went to New York on sabbatical to experience first hand," the professor adds. "He's a fabulous classical musician who just received his Master of Music degree from one of the world's great conservatories -- the Manhattan School of Music. He also improvises and plays in rock bands. His concert here in Greencastle will use all three of these skills."

Tomorrow's concert will take place at 7:30 p.m. in Gobin Memorial United Methodist Church and is presented free of admission charge.

Professor Edberg's work in classical music improvisation was featured in a November 28, 2008 article in the Wall Street Journal.