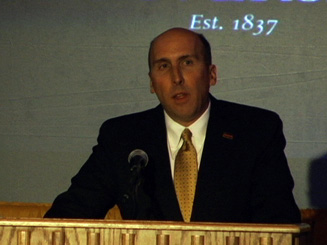 "One can't really know what was in the minds and hearts of those who created this University nearly two centuries ago," DePauw President Brian W. Casey told a crowd that packed into the Great Hall of the Green Center for the Performing Arts this afternoon to celebrate the University's 175th anniversary. "But we surely know they were hopeful. Creating new universities is nothing if not a remarkable act of hope. And that is why we are here today -- to acknowledge that hope."

On this day in 1837, the Indiana General Assembly approved the charter for a new college to be founded by the Methodist Church and located in Greencastle. At 5 p.m. today, students, alumni, faculty and staff, citizens of Greencastle, and friends of DePauw gathered to mark the date, and begin the celebration of the University's 175th year -- with 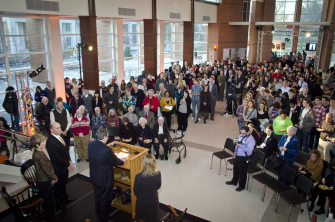 festivities planned for the next eighteen months.

The crowd was greeted by Marcia Sloan Latta, vice president for advancement, bowed for an invocation from Bishop Michael J. Coyner, Indiana Conference of the United Methodist Church, heard a proclamation from Greencastle Mayor Sue Murray, and enjoyed a performance by students in the DePauw School of Music. The audience filled the space. [On YouTube - Bishop's invocation & Mayor's proclamation]

"We begin, today, an 18-month celebration of DePauw University’s past, its present, and most importantly, its future," Dr. Casey noted. "We honor first all those who have gone before us, the nearly quarter of a million students who at one time came to this campus and the hundreds of faculty and staff members who once called this University their home. We honor, of course, the University founders. From the beginning, the founders 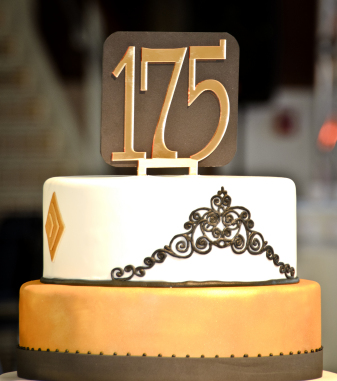 of this school imagined that this would be an institution of national stature. The college was 'forever to be conducted on the most liberal principles, accessible to all religious denominations, and designed for the benefit of our citizens in general.' "

The president pointed out that even 175 years ago, "Among the many things the founders hoped for was us. They hoped for our students, our faculty, for this day. And we should hope, in turn, that 25 years from now, as DePauw enters its third century, that our successors will gather on this campus again. In 2037 there will be a new group of DePauw students and faculty and staff gathered to celebrate a school that had begun, in 2012, a time of significant growth and accomplishment."

Casey concluded, "Schools such as ours have difficult times and brighter moments. The brighter moments come when people have hope, and energy, and drive. History is written in chapters, and today, inspired by the past, we begin to write our chapter. The past is prologue for those who are brave about the future. This is a great day, and a good moment for DePauw. It is, as our founders wanted it to be, our time."

What followed was a performance of a song with that title. The crowd later broke into a spontaneous rendition of A Toast to DePauw. 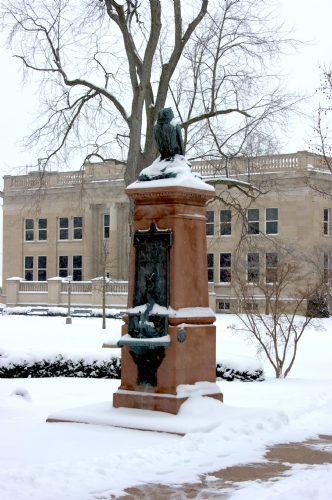 For more on the 175th anniversary celebration, and to keep abreast of upcoming events, click here.