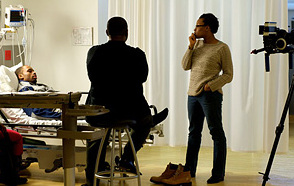 "Now that I’m a little older, I realize just how critical DePauw was in my growth and development and in defining who I am as a human being and as a woman. It has definitely inspired my storytelling," explains Chinonye Chukwu ’07.

Writer, producer and director Chinonye Chukwu returns to campus on Tuesday, Oct. 9 to give a public lecture and screen her first feature film, AlaskaLand, the second film of the 2012-2013 Film Studies Series. The lecture, “My Journey as an Independent Filmmaker,” begins at 4:15 p.m. in Watson Forum in the Pulliam Center for Contemporary Media. AlaskaLand will be screened at 7:30 p.m. in the Student Union Memorial Building Ballroom. Both events are free and open to the public.

Chukwu says that coming back to DePauw as a filmmaker is surreal, but at the same time, it’s something that she could see happening when she was a student. “I’ve always seen myself as a filmmaker,” she says. “It’s just such an amazing opportunity to return, and a blessing to have people at DePauw who have an interest in what I’m doing. I’ve spoken at other universities before, but with DePauw, it is definitely a homecoming.”

Chukwu was born in Rivers State, Nigeria and raised in Fairbanks, Alaska. Her parents, Nigerian immigrants, went to Alaska to establish themselves as engineers. She grew up balancing her traditional Nigerian upbringing, with her American, and more specifically, Arctic surroundings, and it is this dichotomy that serves as the impetus for AlaskaLand. 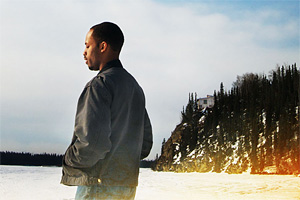 AlaskaLand tells the story of Chukwuma, an Alaskan-raised Nigerian struggling to balance the expectationsof his traditional Nigerian parents and the larger world around him. After a tragic car crash, Chukwuma is separated from his younger sister, Chidinma, who moves to Nigeria with their uncle until she becomes of legal age. Two years later the siblings reconnect to find their estrangement has created new personal and cultural frictions in ways that bring them closer to each other and their roots, as well as help them define what it means to be a Nigerian in Alaska.

Chukwu remembers that it wasn’t until her junior year that she summoned the courage to tell someone that she was interested in filmmaking. “The first person I told was [Associate Professor of English] Chris White – a fabulous professor,” Chukwu says. “She told me, and made me believe that I could do this – that I could make this happen. That I could write that script, be that filmmaker, win that award. Even though those are things that intellectually I knew, Professor White was one of the first people to unconditionally – without question – support me.”

Chukwu shares lessons learned throughout the filmmaking process. One is patience. “You have a very set idea or plan for how you want the film to go, how you want it to look, how you want it to be received,” she says. “I had a very specific journey in mind, and I had to let that go because it didn’t happen.” Chukwu explains that they had to cut 20 pages of the script while shooting because they ran out of time.

“We had to make a lot of concessions,” she says. “We rewrote an entire scene on the spot seconds before we shot it, but that’s filmmaking. Letting go and embracing this new journey, this new path for your film is probably the greatest lesson that I’ve learned. It’s not compromising. It’s not mediocrity. It’s still working very hard, but opening yourself up to other possibilities th 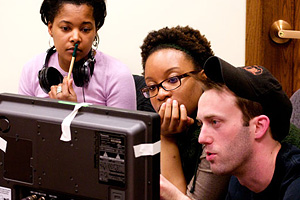 at can still exceed your expectations of where you want to be in your career. I think that has been incredibly difficult for me to learn, to accept and to be thankful for."

Another lesson is to be thankful for rejection. “In this industry, you get rejected all the time,” Chukwu says. “Rejected from festivals, investors, actors and you reject yourself. You learn how to be thankful for the rejection because it’s part of your journey, and learn to not wallow in it. That’s hard because I’m not going to lie and say it doesn’t hurt. It’s hard, but lately I don’t wallow because I know there is light at the end of the tunnel, and I know my blessings and I’m just grateful.”

Chukwu shares that she’s written a script for a dream cast. “I have a script that I want Viola Davis to star in,” she says. “I’ve written it for her. I don’t know if it will be the next film. I actually just finished a short film that we’ll start screening next year, and I have documentary idea that I really want to follow through on. I have another script idea that is far less costly and so that will probably be shot sometime early next year. There are just so many stories to tell.”

To learn more about the Film Studies Series, click here.