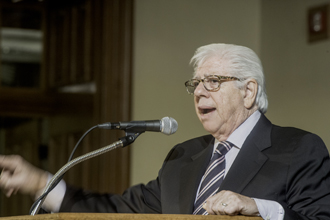 at DePauw University tonight.  Forty years after he and Washington Post colleague Bob Woodward won a Pulitzer Prize for their investigative reporting that uncovered the Watergate scandal, Bernstein pondered "The State of Our Information" in a Timothy and Sharon Ubben Lecture to a packed house in Meharry Hall, located within DePauw's historic East College.

"Vibrant journalism is being done every day in newspapers, online, in magazines, in television," Bernstein declared. "But journalism is also a reflection of the larger culture, particularly in this country, and our culture in America -- political, journalistic, economic, social -- is troubled, beyond troubled.  We've had 30 years -- your lifetimes -- of cultural warfare in America and it has taken a terrible 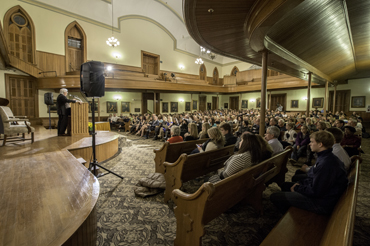 toll on our country, on our culture, on our politics, on our journalism, and on our civic comity."

In the early 1970s, Bernstein and Bob Woodward broke the Watergate story for  the Washington Post, leading to the resignation of President Richard Nixon and setting the standard for modern investigative reporting, for which they and the Post were awarded the Pulitzer Prize in 1973. The author of five books, including All the President's Men and A Woman In Charge: The Life of Hillary Rodham Clinton, Bernstein makes regular appearances on MSNBC’s Morning Joe and  is a contributing editor to Vanity Fair.

At DePauw, Bernstein said that Washington, D.C. has become a "capital of dysfunction, specifically because so few people there seem capable of solving real problems anymore."  The veteran journalist argued, "The missing ingredient too often in our national 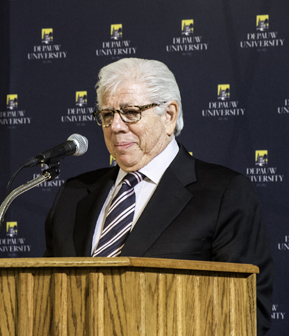 life today -- especially in Washington, including in our journalism, especially in our politics -- is the common good.  Today Washington exists largely in a partisan, ideological cocoon.  So instead of talking meaningfully about how to move the economy forward with dynanism and with fairness ... we have been subjected in this 25, 30, 35 years to the politics of ideology over problem solving, the politics of fiction and myth over fact -- including in our journalism too often -- and it extends as well to how people process information in our media culture today."

It's been 53 years since he began his career as a 16-year-old copy boy at the Washington Star in the nation's capitol.  "The last 40 years has really been reporting about the use and abuse of power -- political power, journalistic power, spiritual power, power of the government, the power of great leadership, and the abdication and perversion of that leadership," the journalist told his DePauw audience.

Bernstein said his "simple concept" for reporting, from the very beginning, has been "to pursue the best obtainable version of the truth .... A simple phrase, a very difficult concept to bring about." In modern America, he believes, "We are experiencing, much too often, the opposite ... Increasingly we live in an age when people reading the web and newspapers and watching the 'news' are not 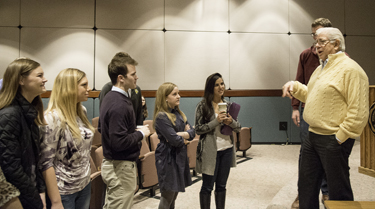 interested in the best obtainable or available version of the truth or anything approaching it.  They're looking increasingly for ideological and partisan ammunition to reinforce what they already believe and think they know.  Real existing facts instead become unimportant. The partisan or ideological cocoon is the unit through which information is evaluated, and the common good becomes the last consideration along with concern for truth, or accuracy, or context." (photo: Bernstein with DePauw Media Fellows)

Just as important as how news is produced is "how it is received," Bernstein asserted, "because we are finding that our country particularly is becoming a place where there is not enough interest in the truth and doing the hard work of sorting out the truth." 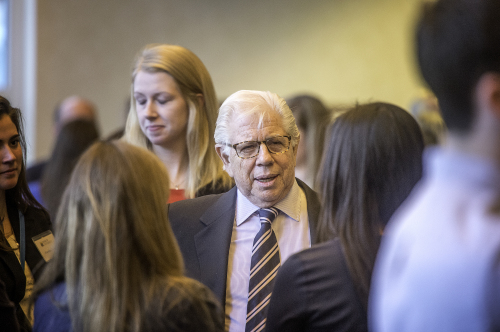 Instead, people tend to "use information as ammunition rather than for understanding."

The legendary journalist reminded his audience on several occasions that each individual -- as a consumer of information -- has a responsibility to weigh messages before jumping to conclusions. "Almost every first-rate story I've ever done has been a surprise to me in where the facts took me, because I listened and I followed where that persistence took me.  But I went there to hear other people, not me, and let the facts carry me.  And I think that's a good place for us to start, especially now." 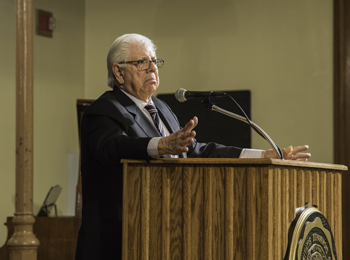 with Republicans joining Democrats -- to investigate President Nixon, something that he can't fathom happening today.  When Gerald Ford pardoned Nixon, Bernstein says he and Woodward saw it as a "terrible act," but that view has changed with time. "Later, Gerald Ford lost the presidency largely because he pardoned Richard Nixon and he put the national interest first.  Because he knew that if Nixon were put on trial, the Watergate saga would continue, the country would continue to be riven if (Ford) could not govern, if the country could not unite.

"We were wrong.  It was a great act.  And it saved the country great trial because Gerald Ford was willing to sacrifice his own presidency for the national interest."

The journalist added, "Remember that time those of you who are of an age, 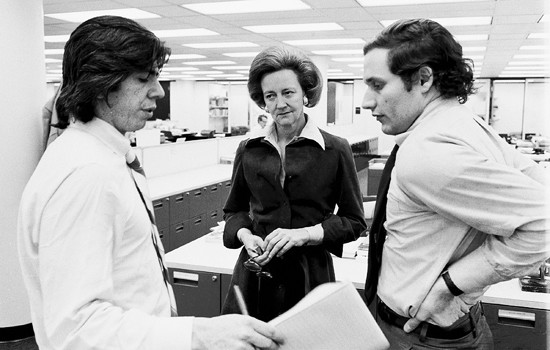 and think of that time those of you who weren't, because we have no such parallel today."

Bernstein spoke in the same venue as Bob Woodward did when he came to DePauw as an Ubben Lecturer to discuss "The Press and the Presidency" on December 2, 1994. Richard Nixon visited DePauw on May 11, 1957, when he was Vice President of the United States. (black and white photo shows Bernstein, Post publisher Katherine Graham and Woodward during the Watergate scandal; courtesy: Washington Post)

Bernstein is currently at work on a television series on the U.S. Congress "and the total breakdown of one of our three branches of government." He asked, "Why aren't I writing a book or a newspaper series about this?  'Cause I don't think anybody would read the thing.  I don't think there's enough real interest, but I think perhaps through a television series it can 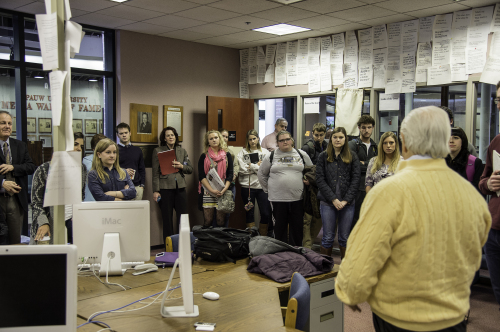 get the kind of contextual reception that might open people's eyes to the reality of what has happened to the most essential element of our democracy in this country and similarly has happened in our state legislatures." (at left and below: Bernstein visits The DePauw)

He continued, "We have a Congress of 435 members, and of those 435 seats maybe 80 are competitive.  The rest have been gerrymandered into lifetime sinecures ... by both parties.  That is not democracy, and that is not part of our journalistic agenda either and it needs to be."

As proof that important investigative journalism is still being done, Bernstein pointed to the Boston Globe's coverage of sexual abuse by Roman Catholic 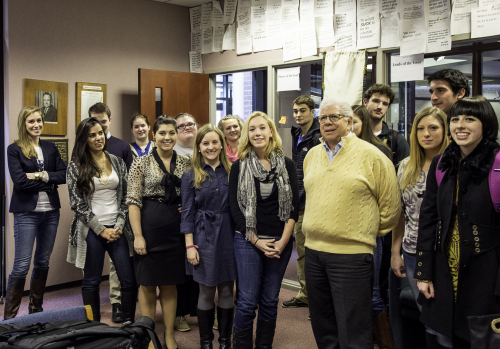 priests, which won the 2003 Pulitzer Prize for meritorious public service.  "Consider that the Catholic Church is as powerful as any institution in the world, and those reporters went out day after day and wrote those stories."

In the question-and-answer session that followed his remarks, Bernstein was asked how he felt about surveys that show many young Americans cite Jon Stewart's The Daily Show and Stephen Colbert as their top sources for daily information.  "It's satire, it's not news ... It's great, it's fabulous, but does it fill the vacuum when we don't do our work?  No!  It's interpretive but does it get any original information out there that we need to know and that we ought to be having vibrant journalistic institutions do the work of?  Does Jon Stewart go out there and break stories?  Does Stephen Colbert?  No."

After being brought to the stage by Lili Wright, associate professor of English, Bernstein 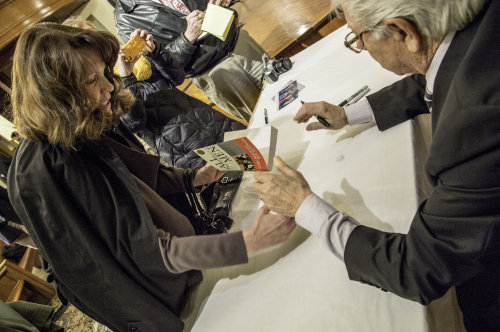 remarked, "I think that's the most extraordinary introduction I've ever been honored to have, thank you so much.  Now I can see I am really gonna have to go for a Boulder Run," he said to laughter.

Carl Bernstein's day at the birthplace of the Society of Professional Journalists began with a visit to a Media Fellows class led by Bob Steele, Distinguished Professor of Journalism Ethics and director of DePauw's Janet Prindle Institute for Ethics.  He made an impromptu stop in the newsroom of The DePauw, Indiana's oldest college newspaper, where he talked with student journalists and examined the latest issue of the publication.  Bernstein then held a news conference in the Pulliam Center for Contemporary Media before heading to the Inn at DePauw for a reception with students and faculty before his speech.  The evening concluded with Bernstein signing books for his audience.

In Meharry Hall he spoke of "the day I've had at this extraordinary institution and with the wonderful people, particularly the 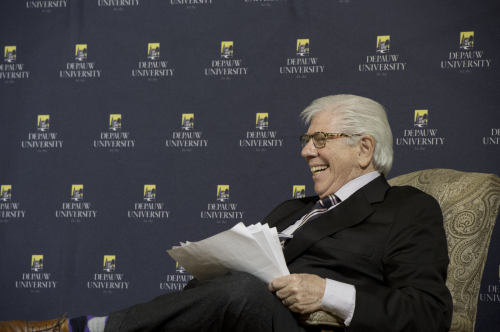 students, who are here this evening."

Bernstein came to DePauw as a guest of the Timothy and Sharon Ubben Lecture Series, which was established in 1986 through the generous support of 1958 DePauw graduates Timothy H. and Sharon Williams Ubben to "bring the world to Greencastle." Before tonight's speech, President Brian W. Casey noted, "It's been an incredible signature program for the University   I think it's also appropriate at this time to recognize that Tim and Sharon Ubben just last week gave $20 million to this University for need-based scholarships, which is another terrific gift." 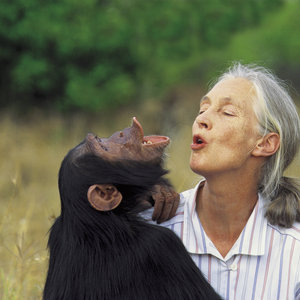 on Wednesday, April 17, to discuss "Sowing the Seeds of Hope."

To view a complete roster of Ubben Lecturers -- which includes links to video clips and news stories -- click here. Video montages of many guests are available on YouTube.