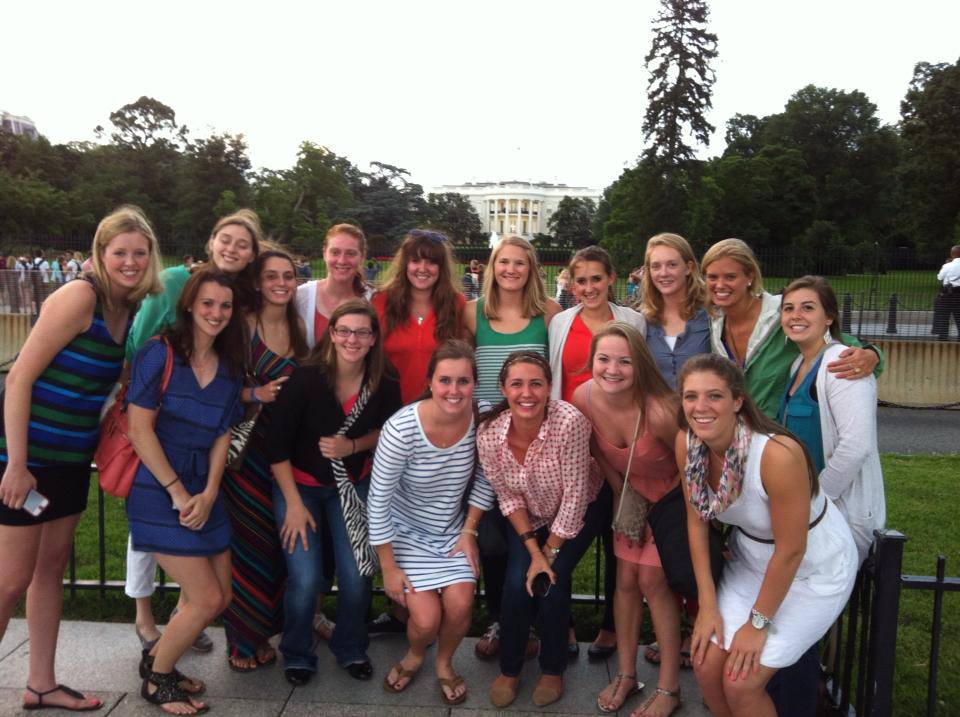 "While it has long been a tradition for the President to invite championship teams to the White House, bringing in Division III women's teams doesn't have a lot of precedent," notes a story published in today's Banner-Graphic. "The 2007 champs didn't get an invitation, and nobody imagined the 2013 champs would, either. But DePauw has alumni in high places, and because the WNBA's Indiana Fever won last season's championship, there was a perfect opportunity to utilize those connections."

Grant Wieman reports that Bess Evans, a 2007 DePauw graduate, and David Dietz '11, both work at the White House and were instrumental in the invitation that was extended to the national champions from DePauw.  "The love that our alumni have for this institution and the connections they have (is amazing)," Stevie Baker-Watson, Theodore Katula Director of Athletics, tells the newspaper.

The University learned of the White House invitation on June 7, and coach Kris Huffman reached out to her players -- who are spending the summer all across the nation --

to spread the word.  The actual visit to the White House took place last Friday, June 14.

"The team was told they would get to tour the White House, then sit in on the speech and photo opportunity President Obama had with the Fever, which was in town to play the Mystics on Sunday. There was to be a brief tour, but no actual meeting with the President. 'We really didn't know what to expect when we were there,' Baker-Watson said. 'We wanted to temper the expectations of the women, but at the same time try to make them realize how special this was.' "

As the event in the East Room began, President Obama noted that the Fever "brought Indiana's other championship team with them, the Division III women's basketball champions, the 34-0 DePauw Tigers, who are in the audience." Wieman writes, "Then he dropped a bomb on everyone. 'That's pretty cool. Well, we're going to have to get a picture after we do all this, with the Tigers.' The players and coaches from DePauw were shocked, and still not sure if they believed it. 'As soon as he was finishing up, the Secret Service grabbed us,' Huffman said. The party was hustled into the Blue Room, two doors away, then emotionally ambushed by President Obama. Not surprisingly, the President was calmer than the players. He dribbled a basketball, tossed it to one of his staff members and started shaking hands and asking questions ... President Obama shook all their hands and asked brief questions, which the players mostly answered by repeating the same thing back to him. 'I heard some of the girls saying, 'I'm not going to wash my hand,' ' Huffman said. He then asked Huffman about the outgoing seniors and their future, then the future of the team. 'It was very cool and we were all in awe,' (guard Lauren) Abendroth 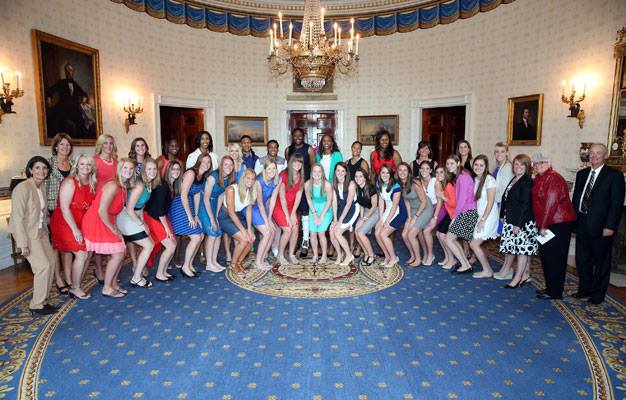 said. "Meeting him in person is a lot different than the thought of meeting him. It was so surreal and I was a little awestruck.' "

The DePauw players and the WNBA champions later posed for photos together.  The Tiger entourage later had dinner with Washington-area DePauw alumni.

"I am so motivated to go back next year," Abendroth, a rising junior, tells the newspaper. "It was one of the coolest things I've ever done and we have to win back-to-back."

You'll find the complete story at the Banner-Graphic's website.

A summary of the White House visit, including video, is available here.