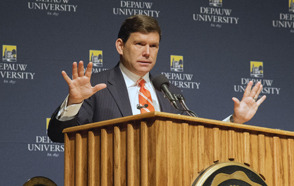 Baier added that networks need to be "actively engaged in social media and online," which he says, Fox is already focused on.

An English (composition) and political science double major at DePauw, Baier took part in a conversation with Jeffrey M. 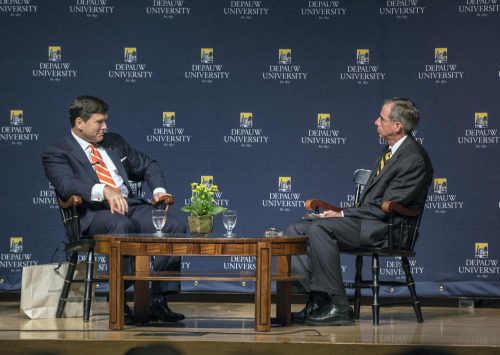 McCall, professor of communication at DePauw and 1976 graduate of the University.  Baier was among the first students to work in the then-new Center for Contemporary Media and was captain of the Tiger golf team.  Early in his remarks, he showed the audience a black-and-white photo of the original DePauw student television news team; he was the anchor.

"It is very funny to see this picture because I was just going through my stuff at home ... and I found a tape, and I put it in, and it was horrific," Baier deadpanned.

The journalist told the 675 people in Kresge Auditorium that the line between straight news and opinion has become blurred in recent years as cable, satellite and the Internet have provided a plethora of new information options.  Baier stressed that he views his show as a straight news program that includes a panel discussing topics in one 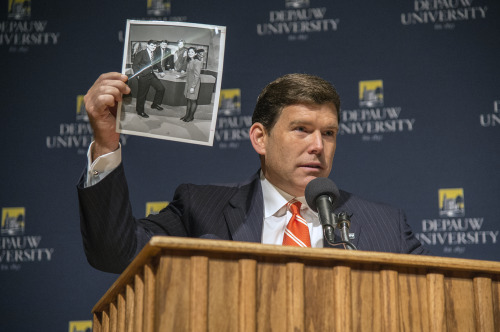 segment, which he maintains sets Special Report apart from some other shows.

"Listen, people meld opinion and news together," he stated, adding that "they think sometimes it's just one animal.  Rachel Maddow is not, you know, Brian Williams, and believe me, Brian Williams wants you to know that. I am not Sean Hannity, and I want you to know that.  So there needs to be a separation in the mindset that there is a news section and opinion section, just like a newspaper."  But Baier says outlets have not done a good job of helping consumers of information make that distinction.

of DePauw University, who also happened to be Baier's Sigma Chi fraternity brother. "He's on the panel so much because he has too many stories about me," Baier quipped as the audience roared with laughter.

Dr. McCall asked about the soft news that now permeates many news shows, as outlets increasingly report on celebrities and replay pet videos popularized on YouTube. "Miley Cyrus will not affect your life long term," Baier said to laughter from the audience.  "Those things are flashes in the pan."  In a serious newscast, "We are talking about things that could structurally change the way the U.S. operates ... when the Supreme Court weighs in on something it is changing the country.  When Syria is about to explode and the Middle East is a powderkeg those are things that could change your life dramatically.  If there's a major war in the Middle East and the price of oil goes through the roof, guess what, you're not going to be able to fuel your car to get to the Miley Cyrus concert."

The rundown of Baier's nightly show is fluid from the time he and his staff hold a morning meeting through the day as they near show time. "Most days the whole thing changes at about five o'clock, it really does, and sometimes ten 'til five, if 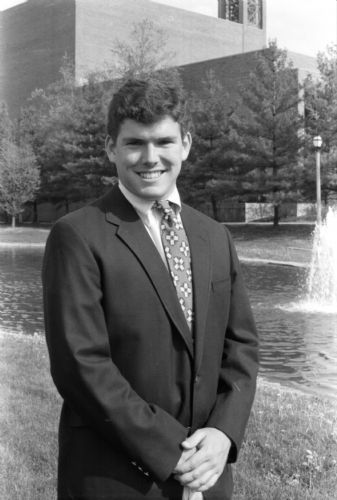 we're lucky," he said. "But that's a good thing, because we're giving you the latest, live (news) if we can."

Baier described interning while a DePauw student with Bernard Shaw at CNN and landing his first professional job at WJWJ-TV (PBS) in Beaufort, South Carolina.  He also worked at WREX (NBC) in Rockford, Illinois, and WRAL (CBS) in Raleigh, North Carolina, before beginning his fifteen-year-long tenure at Fox.  He joined the network in the early days and its southeast bureau was based out of his apartment.  Baier went on to become the network's national security correspondent and chief White House correspondent.  Special Report is #1 in its time slot and regularly draws more than 2 million viewers a night. (at right: Baier as an undergraduate)

His advice to students seeking a career in journalism is to "just keep going" and spend time focused on their work and getting better, but not worrying about the next job which, he says, will come with time and experience.

Baier also recalled advice he received from the late John McWethy '69, longtime ABC correspondent, that when he hung up his coat upon returning home each night he also put away all thoughts of work.  Baier's son, Paul, now six years old, was born with five congenital heart defects and 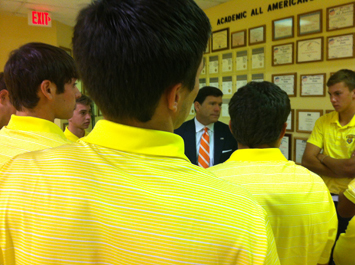 has had several surgeries, including one a few weeks ago.  "That changed my perspective on everything," Baier told the audience, especially Washington politics.  "There's so much more outside of that place and all of those talking points and all the back-and-forth.  And hopefully I bring some of that to the anchor desk." (at left: Baier talks with DePauw's men's golf team)

Baier's morning at DePauw began with a meeting with student journalists.  He then had breakfast with some of his former DePauw golf teammates as well as the current men's golf team, as well as other students and staff.  Before his Ubben Lecture, Baier was presented with the University's Distinguished Alumni Achievement Award for Media.  He returned to the Sigma Chi house to have lunch with current students. 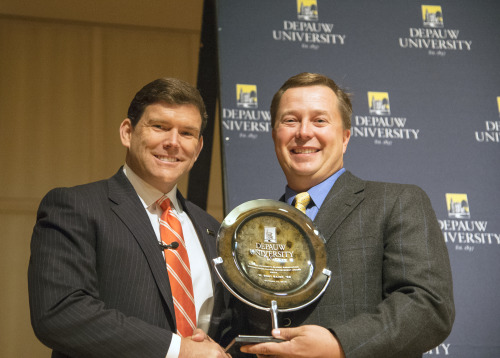 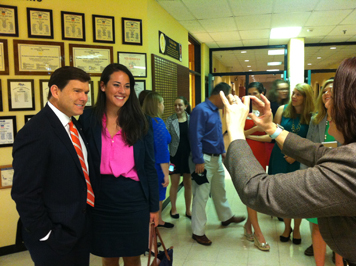