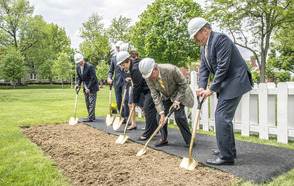 Construction efforts at the site of Hoover Hall, the University’s new 48,600 square-foot dining hall, are officially under way following a commencement weekend groundbreaking ceremony in the shadow of East College.

The new hall will fulfill a core element of the University’s Campus Master Plan, which was approved by the Board of Trustees in October of 2010 and called for the transformation of the campus core into a place of greater connection, contemplation, and creativity. Hoover Hall, which will sit just north of Hanna Street along Burkhart Walk, will replace the current “Hub,” a food-court-style dining hall in the Memorial Student Union Building, and will serve as the primary dining space for first-year students and upper-class students living in University housing.

The construction of Hoover Hall is made possible by a collection of gifts from DePauw alumni.  R. David and Suzanne A. Hoover (both 1967 graduates of DePauw) provided the lead gift to support the construction

effort; the building will be named in their honor.  Sarah R. and John H. Wallace (both 1976 graduates of DePauw) and James B. Stewart ’73 made a joint commitment that will support the creation of a faculty and staff dining room within Hoover Hall.  Additional gifts from donors who wish to remain anonymous have also supported the Hoover Hall project.

“Our goals for Hoover Hall were straightforward,” said President Brian W. Casey, during his remarks at the groundbreaking ceremony.  “To re-energize the historic core of this campus and to serve as a point of connection among students and between students and faculty.” 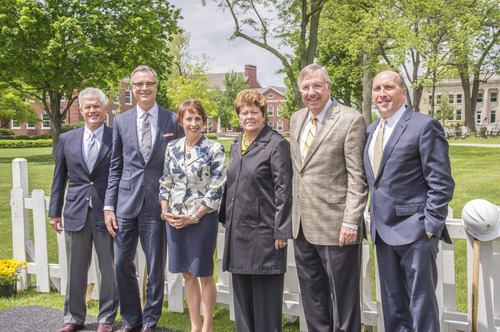 “With the creation of a faculty and staff dining room, this new dining hall will also have a place for members of the faculty to collaborate, to extend discussions from classrooms, or to spend time advising students over a meal,” he added, speaking of the Wallace-Stewart Faculty Club.

The new dining hall, which has a target completion date of fall 2016, has been designed by Robert A.M. Stern Architects and will seat more than 600 students in the main dining room, with dozens more able to dine and come together in an array of smaller dining rooms.

Dave Hoover, a past chair of the University’s Board of Trustees, serves on the boards of Eli Lilly and Company, Energizer Holdings, Inc. and Steelcase Inc. and is a director of Boulder Community Hospital and Children’s Hospital Colorado. In addition to receiving a bachelor’s degree in economics from DePauw, he was awarded an M.B.A. in finance and real estate from Indiana University and completed the Advanced Management Program at the Harvard University Graduate School of Business.

Suzanne Hoover, a former teacher and president of the Muncie Community School Corporation Board of Directors, received a bachelor’s degree in history from DePauw and an M.S. in secondary education from Indiana University. She is a past member of the board of trustees for the University of Colorado Foundation and a current board member of Impact on Education, a Boulder-based education advocacy organization. 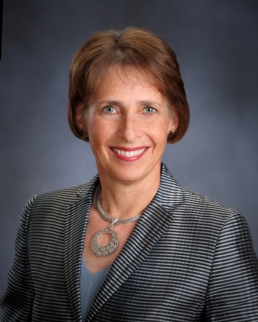 Sarah R. Wallace is the chair of the University’s Board of Trustees. She is also the chair of the board of First Federal Savings and Loan in Newark, Ohio. John H. Wallace is a practicing dentist in Granville, Ohio. Each of their three children also attended DePauw: Sally W. Heckman ’05, John Gilbert Wallace ’08 and John Gerald Wallace ’08.

James B. Stewart is a Pulitzer Prize-winning journalist and the author of the “Common Sense” column in the New York Times. He served as chair of the DePauw University Board of Trustees from 2005 through 2007. He is also the author of 9 books, including Den of Thieves and his most recent work, Tangled Webs: How False Statements are Undermining America from Martha Stewart to Bernie Madoff.