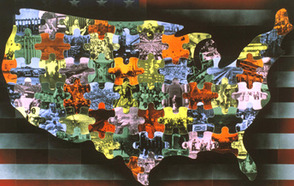 American artists of African, Arab European, Asian, Latino and Native American descent explore their heritage in this vivid and diverse exhibition using a wide variety of media. The artists examine patriotism, communication, the struggle for acceptance, what it truly means to be an American in the 21st century and more. Humor, heartache, anger, apprehension -- all emotions are evoked by these works, raising questions about race, class, gender and age. 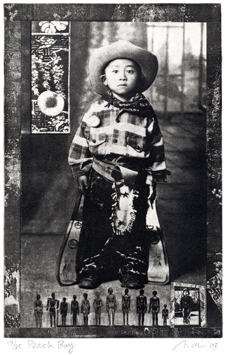 The images reflect the complex dynamics between people and within the minds of individuals as they participate in and contribute to a composite, inestimable culture. We, as Americans, would need an infinite mirror to see our full reflection,” notes Blake Bradford, Infinite Mirror curator and director of education at the Barnes Foundation. (at right: Tomie Arai, Peach Boy, 2003, etching; © Tomie Arai)

Four main themes run through Infinite Mirror: Self-Selection, Pride, Assimilation, and Protest, providing audiences with the opportunity to re-examine both the story and storytellers of the quintessential “American dream.” Self Selection reflects how we choose to present and project ourselves to the world. Largely based in portraiture, the variety of techniques and twists on this age-old art form convey a multitude of values, desires and anxieties. In Ben Gest’s Alice Waiting, we see an older woman in a contemporary variation on a seated portrait, alluding to our interdependence and the multitude of ways in which society shares space and time.

In Pride, artists explore an appreciation of one’s origins, character, values and personal accomplishments. Some works convey confidence and defiance in the face of inequality or degradation, while many others warmly exude joy, love and strength. These artists celebrate their lives as U.S. citizens while acknowledging the histories and traditions of their familial roots. Leamon Green Jr. renders this balance in his 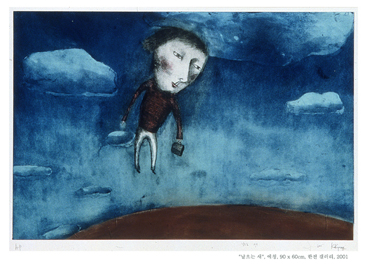 mixed media work Big Man Advisor, depicting a seated man flanked with a Benin sculpture to his left and a Roman or Greek statue to his right, paying tribute to both his African and European heritage. (at right: Kakyoung Lee, Drifting 3 (Flying Bird), 2001, etching; © Kakyoung Lee)

Many artists in Infinite Mirror weigh in on the two-way transaction of Assimilation, the third theme, by investigating the degree to which new cultural contributions are accepted, mined, or rejected by society. Conversely, several of the artists examine the degree to which they have retained their original cultures and the ways in which they have evolved and emerged in their changing environments. The tension that exists between these two ideas is the point of creative take-off for artists such as Tomie Arai, whose Peach Boy etching shows a young boy donning the trappings of a cowboy on the frontier, hinting at the actual experience of Asian immigrants working on the railroad and the myth of the American West.

Protest, the final theme, explores the American tradition of questioning the ideals of U.S. politics and social culture. In Richard Ray Whitman’s Do Indians Go to Santa Fe When They Die? and Edgar Heap of Birds’ Telling Many Magpies, Telling Black Wolf, Telling Hachivi, the artists use their work to question the treatment of Native Americans in the past and present. 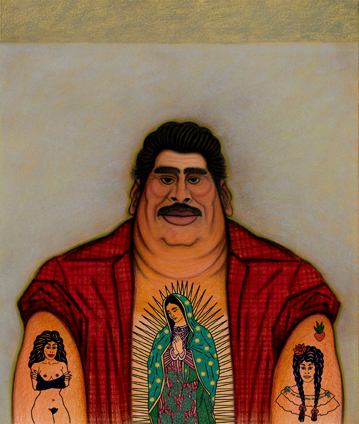 Since 2009, Bradford has been director of education at the Barnes Foundation in Philadelphia, where he oversees the Foundation’s longstanding adult classes, its K-12 outreach and other public programming. Previous projects exhibitions have included Disinhibition: Black Art and Blue Humor and Material Science, which explored the sensory qualities of artistic media. Co-curators are Benito Huerta, associate professor of painting and director and curator of The Gallery at the University of Texas at Arlington and Robert Lee, executive director and curator at Asian American Arts Centre in New York.

A softbound catalogue accompanies the exhibition, containing essays by the three exhibition curators and 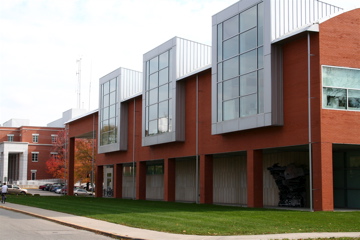 The galleries at the Richard E. Peeler Art Center are open Monday-Friday from 10 a.m. to 4 p.m.; Saturday 11 a.m. - 5 p.m.; and Sunday 1 - 5 p.m., and are closed during University breaks and holidays.  For more information, click here or contact Craig Hadley, director and curator of exhibitions and University collections, at (765) 658-6556.