Today's Americans "A Little More Pleased with Ourselves" and That's a Liability, David Brooks Says in Ubben Lecture 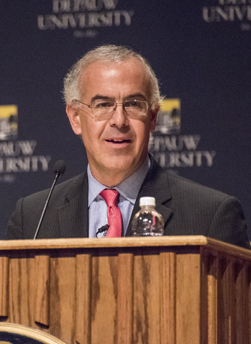 "There's been a shift in values that I think undergirds some of the problems in our politics and makes it harder for young people to lead the sort of rich, full lives that we all want them to lead," New York Times columnist and bestselling author David Brooks told an audience at DePauw University tonight.  Brooks addressed an audience of students, alumni, faculty and others in a Timothy and Sharon Ubben Lecture that wrapped up Old Gold Weekend and the public launch of The Campaign for DePauw.

The speech topic by Brooks was provoked by an NPR rebroadcast of an episode of Command Performance, which originally aired on V-J Day in 1945, after the U.S. claimed victory over Japan.  The program's "tone of modesty" struck a chord with the columnist and television commentator as he listened almost 70 years later, in an era when NFL linebackers do "victory dances" after tackling a runner following a two-yard gain and when polls show Americans are becoming increasingly self-absorbed. 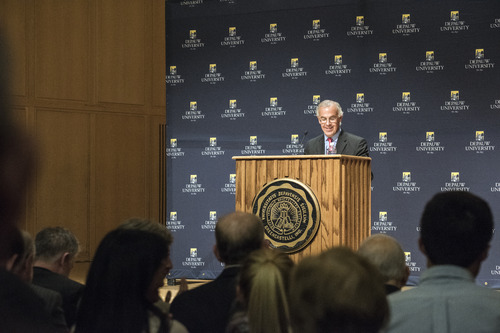 While many things have changed for the better since 1945 -- including race relations, sexual equality and emotional openness -- Brooks worries that modern Americans "are carried away by our own sense of wonderfulness."

In that bygone age and its "more reticent culture," people talked less about themselves, and members of presidential cabinets didn't write books upon leaving office, among other things. "And I think what was different about that culture was people were raised with a sense that they had some severe weaknesses in themselves, and the old fashioned word used was 'sin.'  And that they had to struggle against them to become a complete person." In 2014, people feel the need to promote themselves via social media and to seem as large as possible.

As Brooks sees it, "We've changed, I think, from a culture of 'little me' to a culture of the selfie to culture of 'bigger me' -- a golden figure inside ourselves." 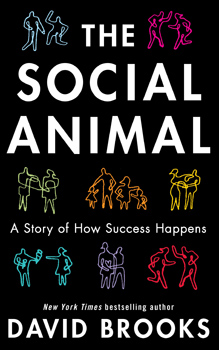 People are "a little more individualistic" than they used to be, and, citing data, the author of The Social Animal: The Hidden Sources of Love, Character, and Achievement said "we're a little more pleased with ourselves." A Gallup poll in 1950 found that 12% of high school seniors viewed themselves as "very important"; by 2005 that was 80%.  More young people now say they want to be famous.  And terms like "humbleness" and "kindness" have declined in use, while people report having fewer close friends.

Brooks went on to draw a distinction between "résumé virtues" and "eulogy virtues."  The first are skills you bring to the marketplace and can list and boast about, while the latter are things that are discussed after you die.  "Things like, are you a compassionate person, are you an honorable person, are you an honest person, what kind of love are you capable of? These are non-overlapping skills," he said. "We would all agree that the eulogy virtues are more important than the résumé virtues, and yet we live in a culture that pays a lot more attention to résumé virtues than eulogy virtues and is a lot more articulate about it."

These changes in the way we view ourselves inform the way we interact, Brooks asserted. "If you have a modest sense of your own knowledge, then you realize you need to the 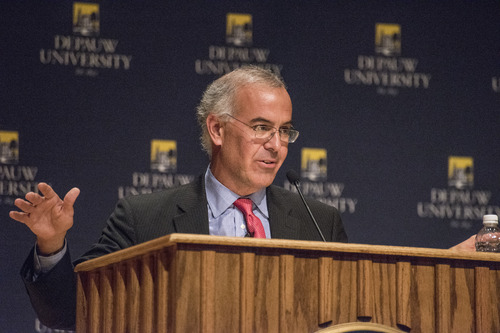 people to disagree with you to correct for your own errors," he said.  "If you think you have the truth by the short hairs, then the people who disagree with you are just in the way ... In some ways I think this inflated sense of self has contributed to a bit of social decay, even as society has gotten much better in a lot of other ways."

The columnist says we all must "rediscover some of the values that were common in our country and in our culture for so many years.  Go back to the basics of who we are and what's important, and how you become aware of your own weaknesses and how you actually build character."

Brooks, whose column on the Op-Ed page of the New York Times started in September 2003, declared, "A shift in values, more than anything else, from a bigger me to a littler me, will lead to a cascade of completion of all the big things we have going on in this country." 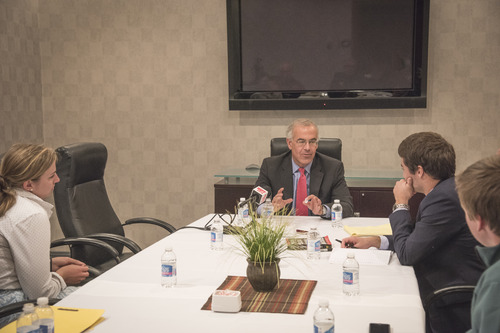 president, The Elms. During the question-and-answer session that followed his Ubben Lecture, he stated that America's politics are in a period of "record polarization" and that "we've gotten more tribal."  Open primaries, redrawing congressional districts and even campaign finance reforms would help, he noted, as well as changing the voting schedule in Washington. "Members of Congress arrive on Tuesday and leave on Thursday. If they stayed over the weekend, they'd actually get to know one another, which they really do not .. But mostly, and I'm a values guy, it takes leadership.  It takes a group of leaders to say, we will actually behave this way ... and I think Obama tried but Congress, it's so dysfunctional that it's very hard to work." 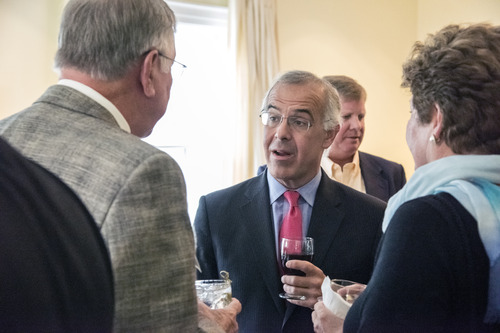 tribal in private than they are in public ... And they hate the system they're in, they didn't get elected because they wanted to be in warfare all the time.  So if there was just like five or six leaders who would actually model good behavior I think there would be a hunger among people who are elected and you might be able to turn around the country. But it actually takes leadership."

"If you ever want to understand the importance of ideas look at the Middle East," Brooks remarked. "If you look at the people who are jihadist -- they're not the uneducated, they are the super well-educated who are caught between modernity and a desire for fantasy of purity, and they create a fantasy past.  I used to spend a lot of time with guys with Hamas and Hezbollah ... you go to their homes and they would have their granddaughters come out and kiss you and they were so gracious. Then you'd ask them about the idea of beheading or blowing up teenagers and they were like totally fine."

Brooks, who teaches at Yale, told his DePauw audience, "If you want to feel good about America, spend time on a college campus."  He said he "really 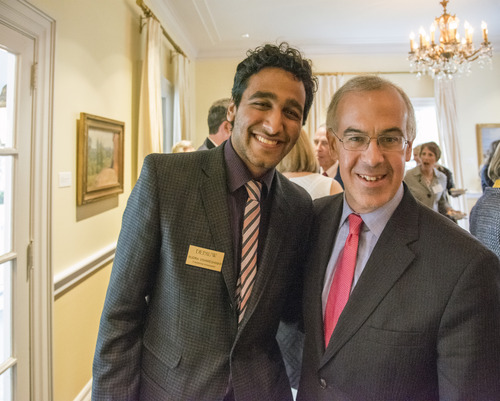 enjoyed meeting the students -- very energetic and very sincere and very bright and lively group ... To have the practice here at a liberal arts college, I was talking to the students here, where they're at the homes of their faculty, where they're part of a learning community where the faculty intensely cares about teaching, it's just such a great privilege."

He added, "I do want to celebrate this school for its great contributions producing journalists." Brooks noted, "You have produced a lot of my friends -- Steve Hayes, Jim Stewart and many others."

Established in 1986 through the generous support of 1958 DePauw graduates Timothy H. and Sharon Williams Ubben (seen below with David Brooks), the Ubben Lecture Series was designed to "bring the world to Greencastle."

Orange Is the New Black author Piper Kerman will speak on February 4, 2015, and another fall Ubben Lecturer will be announced in the coming week. 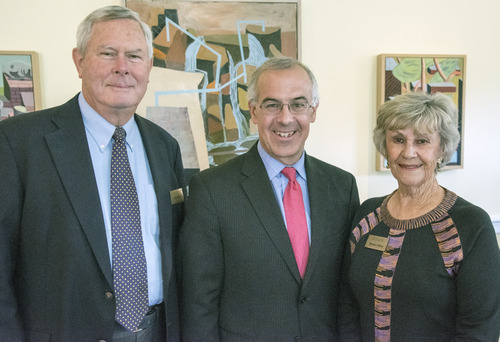 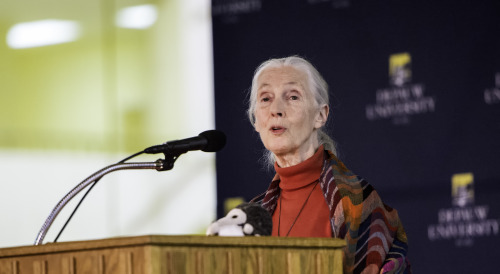