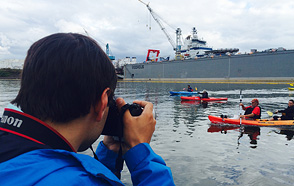 In the cramped and constantly belt-tightening world of news media, student interns are often asked to forgo a paycheck in lieu of the chance to work. These unpaid internships can sometimes seem frustratingly out of reach for a college student expected to pay for food, transportation and lodging.

Enter: the Kilgore Fund. This summer, eight staff members from The DePauw student newspaper are serving on internships around the country – with financial backing from one of their storied predecessors.

"Thanks to the Kilgore Fund, we can pay DePauw student journalists who take nonpaying internships," says Lili Wright, professor of English and faculty adviser to The DePauw. "Many of these students could not afford to take these jobs without subsidy. Without Kilgore, they might be working at the mall. Instead, they are working for professional media outlets and learning from mentors all over the country, building skills, building their résumés."

Named for legendary newspaper editor Bernard "Barney" Kilgore ’26, who grew the Wall Street Journal into an international titan, the Kilgore Memorial Fund has helped develop DePauw’s student journalists since 1969. The fund provides for equipment, traveling expenses and visits from professional journalists, in addition to supporting the professional development of the newspaper’s staff.

"The DePauw and the Kilgore internship program work in a wonderfully circular fashion," Wright says. "At The DePauw, students learn basic reporting, photography and design skills. This work gives them the credentials to apply for media internships. All summer, they learn and improve by working with professionals. In the fall, they bring all that expertise back to the paper. This is one of the reasons DePauw University has produced so many quality journalists over the years."

As Indiana’s oldest college newspaper, The DePauw has an impressive (and ever-growing) alumni roll. Among them:

"The student newspaper is a fabulous way to learn," Wright says. "It can be difficult to make mistakes in a public forum – our readership expects excellence – but there is no quicker way to learn the importance of getting the facts right."