"My journey to freedom is not a hero's journey," Yeonmi Park told an enthusiastic and emotional audience at DePauw University tonight.  As a 13-year-old, Park and her family defected from North Korea, a harrowing tale told in her new book, In Order to Live: A North Korean Girl's Journey to Freedom. "I didn't escape for freedom," Park said during her Timothy and Sharon Ubben Lecture.  "I escaped for a bowl of rice."

The youngest-ever guest in the 29-year history of the Ubben Lecture Series, Park turned 22 the night before the event and spent her birthday at The Inn at DePauw.  Her book was published by Penguin just six days ago.  She received several standing ovations and the crowd sang Happy Birthday in her honor as the program drew to a close.

In her speech, "What It Means to be Free," Park told the 660 people gathered 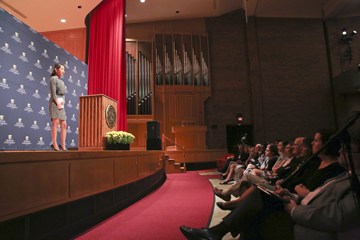 in Kresge Auditorium of her experiences growing up in a land where people are repressed and where citizens have no idea what they're missing because of government propaganda and a system designed to keep them in the dark and powerless.

"North Korea is undescribable and unimaginable, because it's a different universe," Park stated.  In her homeland people are not allowed to wear jeans or dye their hair, and can be executed for watching a movie.  "There's no way I can use human words to describe what's happening in the country, and what's happened for almost seven decades."

Young North Koreans are taught that their country is the best nation in the world, and that the United States and Japan are evil. 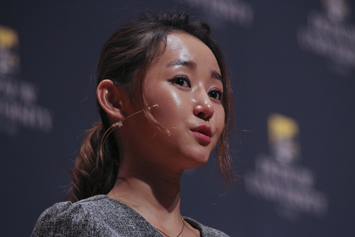 "Being in North Korea is not only physically not free, but emotionally not free.  You are not allowed to think for yourself.  The very first thing my mother taught me was not to even whisper; even the birds and mice can hear you whisper."

She added, "Every basic freedom is denied in North Korea" and that any idea that could promote free will or individualism is kept out of all conversations -- public and private.  "There is no Romeo and Juliet stories. There are no books about romance, or no movies about romance." 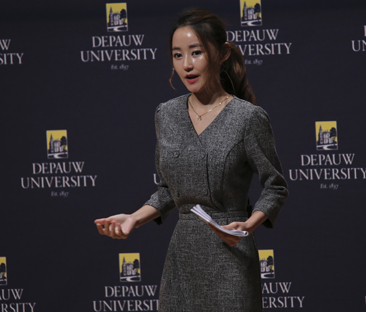 She recalled viewing as a young girl a pirated copy of the James Cameron film, Titanic -- which is banned in North Korea -- and found it "shocking," noting, "The man in the movie dies for love, he's not dying for the leader and the regime and the party.  I just couldn't process it."  But on further reflection, she realized the film was filled with humanity.  "It gave me my first taste of freedom."

Park went on to describe, in terms that made her and the audience emotional at times, how her family -- once relatively privileged -- struggled after her father was arrested for smuggling gold, silver and nickel to Chinese traders to keep the family alive during a relentless famine. On the night of March 30, 2007, with the aid of human traffickers, Park and her mother crossed a frozen river and three mountains to get across the Chinese border. One of the traffickers threatened to report Park and her mother to the authorities if Park didn't have sex with him. Her mother offered herself instead, and was raped in front of Yeonmi, then 13. 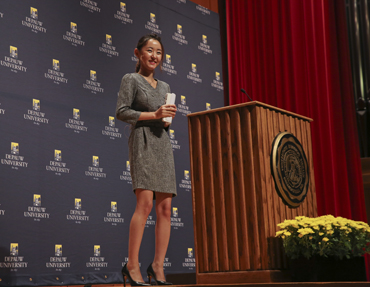 "I didn't even know what kissing was, not to mention what sex is," Park recalls.

The traffickers paid $65 for Park's mother. "I was wondering, staying at the hotel here, how much this night would cost for me to stay here. And in my purse, I have more than $65. And that was my mom's dignity," she said tearfully.

Park was sold for $260, "because I was a virgin, because I was young. I was not a human being, I was a product. And they were negotiating the price in front of me, but all I thought (is) 'I'm hungry, I want to eat something.' It's animal instinct. When you're hungry you don't think of anything else -- you're gonna die."

The trafficker made a deal: if Yeonmi, then 13 years old, agreed to be his mistress, he would reunite her with her 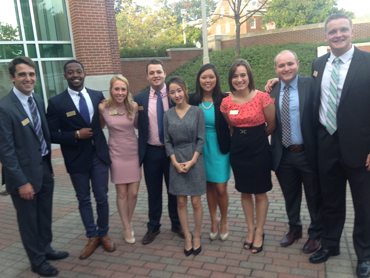 She added, "I wanted to kill myself.  I never wanted to lose my soul in that way but I could see my family again."

When her father joined his family in China he was sick and died shortly afterward from untreated colon cancer.  Sitting next to his dead body early the morning he passed away, Yeonmi Park said, "I couldn't even cry because I was afraid people might hear me.  There's nobody I could call here to say my father died."

She told of burying her father's ashes, and of how she was finally freed by the trafficker and she and her mother met with Christian missionaries in China.  "And they told me there's a way you can be free.  And I asked for first time --  because I didn't know what 'free' was; I never heard of the word in North Korea, we don't have a word for freedom or human rights -- 'What do you mean I will be free?'  And she told me it 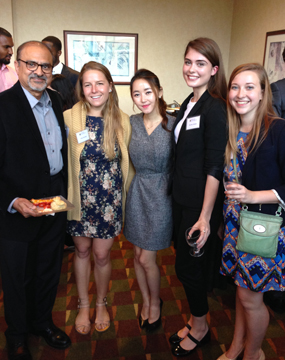 means you can watch movies, it means you can wear jeans, nobody's going to arrest you, and I thought, that's great.  I'm gonna risk my life for that."

By the light of stars, she and her mother fled to South Korea through Mongolia.  There she realized, "To be free physically is easy, you can cross the desert or the river.  But to be free emotionally is the hard part."

The people of North Korea deserve the world's attention, Park declared, stating, "It is the worst place on earth.  We need to raise our voice here, in this democracy," and use social media and other tools to persuade governments and NGOs to intervene.

Park, whose speeches at the Oslo Freedom Forum and the One Young World Summit in Dublin drew raves, called on the DePauw audience to join her in taking a stand for human rights and individual freedoms. Injustice in any part of the world "can affect our liberty," Park asserted, adding, "Another holocaust is happening, and so many of the victims are faceless." 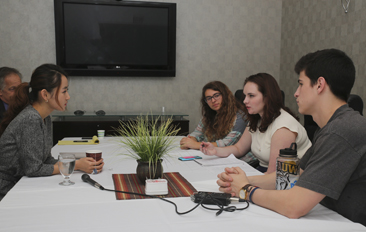 Her day on campus included a session with student reporters (seen at left) and a reception with students, faculty and staff.  After the Ubben Lecture wrapped up, a long line of students, faculty and staff members, and people from the community greeted Park as she signed copies of her book in the Great Hall of the Green Center for the Performing Arts.

Established in 1986 through the generous support of 1958 DePauw graduates Timothy H. and Sharon Williams Ubben, the Ubben Lecture Series was designed to "bring the world to Greencastle" and has now presented 102 programs.

Douglas Hallward-Driemeier, the attorney and 1989 DePauw University graduate whose arguments helped persuade the U.S. Supreme Court to rule in favor of same-sex marriage this summer, will 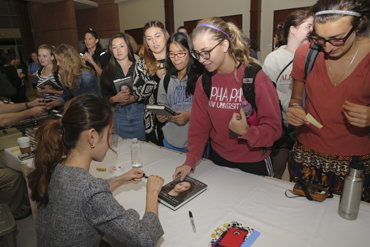 return to his alma mater on Monday, October 26, for the next Ubben Lecture. 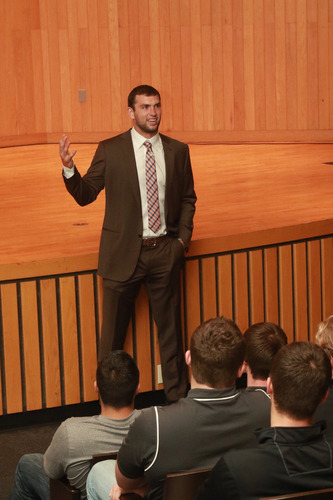