DePauw and Putnam County Students Collaborate on Annual Spring Spectacle of Shakespeare, May 7 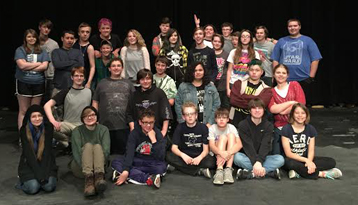 DePauw Theatre’s 2015-16 season closes with the annual Spring Spectacle of Shakespeare on Saturday, May 7 in Moore Theatre, located in the Green Center for the Performing Arts. The festival marks the end of a semester-long, intensive collaboration between DePauw University, Shakespeare & Company, and six Putnam County middle and high schools to produce three of Shakespeare’s plays. (at right: students from Greencastle H.S.)

This year’s festival is under the direction of Gigi Jennewein, part-time assistant professor of communication and theatre, and assistant student director, Alison Howard ’16.

Greencastle Middle and High School students will perform The Tempest at 1 p.m. One of the last plays Shakespeare wrote, The Tempest is set on a remote island, where 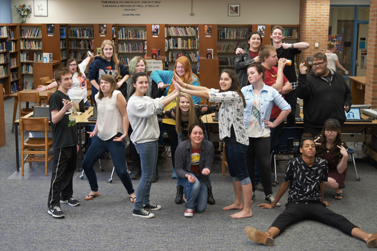 North Putnam Middle and High School students (seen in photo at left) will perform The Comedy of Errors at 3 p.m. Two sets of identical twins who were accidentally separated at birth is the focus of this play, one of Shakespeare’s most farcical comedies. Students are under the direction of DePauw students Jerica Bean ’18, Dustin McCarver ’19, Angelica Ortiz ’17 and Erin Wiemels ’18.

Finally, Cloverdale Middle and High School students will perform A Midsummer Night's Dream at 5 p.m. One of Shakespeare’s most produced comedies, Dream takes place in mythical Athens and an enchanted forest where there is a handsome fairy king, a queen, a misguided parent,

The program is founded upon the principles of the nationally recognized and award-winning program created by Shakespeare & Company in Lenox, Mass. DePauw students are trained to work with youth and teach Shakespeare’s material in an accessible way through theatre games and acting out the text.  Participants from county schools learn to use their voices and bodies to experience Shakespeare’s text in a way that traditional analysis doesn’t provide.

For more information about the Spring Spectacle of Shakespeare, contact Professor Jennewein at gfenlon@depauw.edu or (765) 658-4168.