This year's guest juror is Malcolm Mobutu Smith, associate professor of ceramics and director of graduate studies at Indiana University.

Awards will be announced during the show's opening reception on Thursday, February 2, from 4:15 - 6 p.m., in the Visual Arts Gallery of the Peeler Art Center.

Professor Smith received his M.F.A. in ceramics from the New York State College of Ceramics at Alfred University in 1996. As an undergraduate, he studied at both the Kansas City Art Institute (KCAI) and Penn State University earning a B.F.A. degree from the latter in ceramics in 1994. In addition to teaching and making, 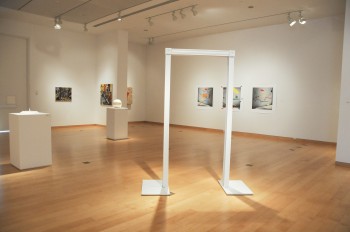 he is also an active lecturer and has presented at KCAI with workshops at Purdue University, Parkland College, Syracuse University, and Michigan State University. Some of his recent exhibitions include solo efforts at IMOCA of Indianapolis and The Evansville Art Museum. Additional solo efforts include "Shift" at the Leedy-Voulkos Art Center and "Glyphs," an NCECA 2007 show, at Pyro Gallery, Louisville, Kentucky.

The galleries at the Richard E. Peeler Art Center are open Monday-Friday 10 a.m. – 4 p.m.; Saturday 11 a.m. - 5 pm; and Sunday 1 – 5 p.m., and are closed during University breaks and holidays.  For more information, click here or email craighadley@depauw.edu.