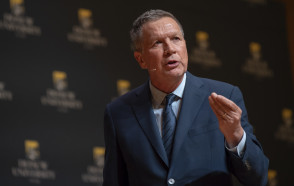 "It's up to us, not somebody else," John Kasich says of moving beyond the divisive politics in modern America. "And I can tell you this," the former governor of Ohio and two-time candidate for President of the United States declared tonight in an Ubben Lecture at DePauw University. "If you work with others (and) become part of a large mosaic that can unify us rather than divide us, we'll restore the soul of our country."

In a speech that was heavy on life advice and light on politics, Kasich noted, "The fact is that people are fed up with all of this division and anger and hatred.  We are fed up with, and we've gotta stand up against it -- each and every one of us, whenever we can."

As he took the stage at DePauw's Kresge Auditorium 17 days after finishing his second term as Ohio governor, Kasic said, "Tonight 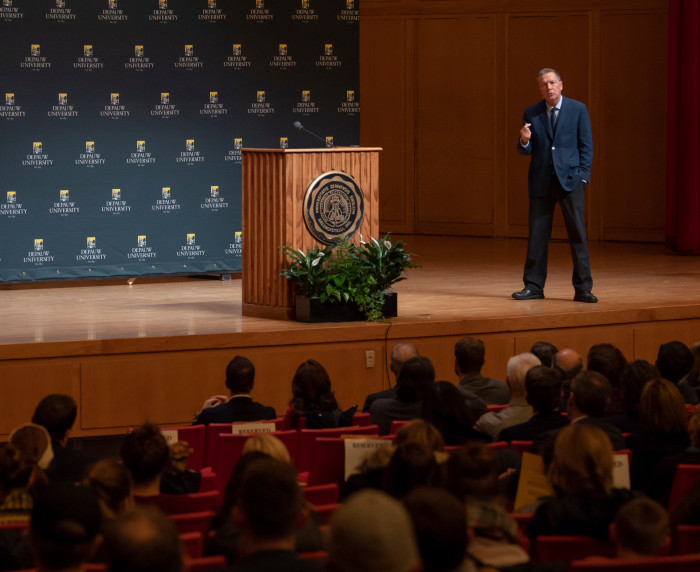 probably a lot of people came here to talk about politics," Kasich said as he walked the stage.  "Politics bores me.  Let me just say that there are so many people who are worked up -- some are worked up about Donald Trump, some are now worked up about Nancy Pelosi -- we wring our hands and we even had times when Trump was first elected that families couldn't even have Thanksgiving dinner together because they were yelling at one another.  And I want to just bring something to your attention: do those people really matter that much to you?  I mean, in your daily life living here in this sweet, sweet town and this wonderful school -- and I'm not just saying it, I really mean it, these are some of the nicest people I've met here today -- does it really matter how the President of the United States or some other big time leader is affecting you?"

He continued, "Most of the time they don't.  You know what does affect you?  ... You're motivated by the people you are around.  For students, it's like can I get my courses, do I like my teacher, is my professor treating me fairly, how are my roommates, and what's going on at home?  Those are the things that really affect us on a day-to-day basis.  And you know what's so great about that?  It means we have the power ... and somehow 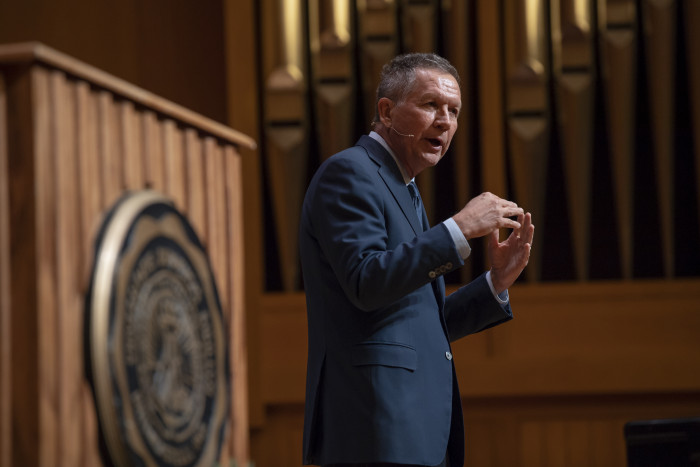 in our country we have been losing sight of the fact that we call the tune, not somebody else that lives in a far away place that we will never even see, let alone meet."

Kasich did state, "What disappoints me about politicians today is that they're worried about their reelection rather than their job."

The child of immigrants, Kasich recounted how, as an Ohio State University freshman, he convinced the college's president to hand deliver a letter to President Richard Nixon, requesting a meeting.  In December 1970, Kasich had a one-on-one session with Nixon.

The takeaway from his experience, Kasich told his audience, "is that there are no limits." Going on to describe other early life experiences, he urged 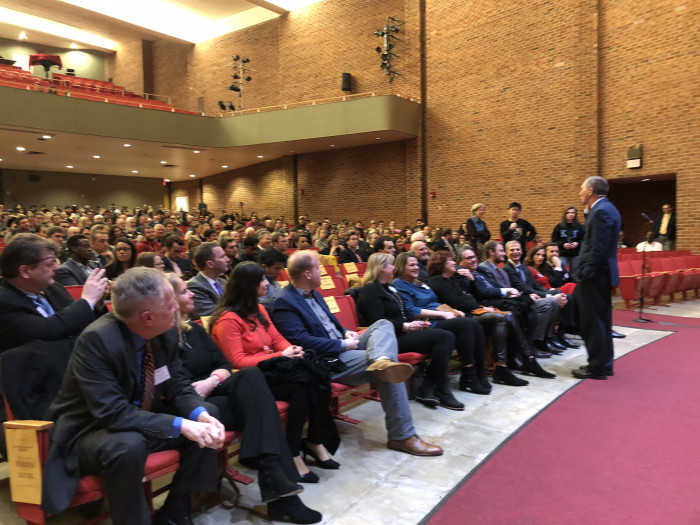 students to "seize the opportunity when it comes. Put confidence in yourself."

The veteran lawmaker told stories of ordinary people and how they proved so-called "little 'ol me's" can be agents of change, and described the impact people ranging from  Rosa Parks, Dr. Martin Luther King Jr., Steve Jobs, Elon Musk, Drake, Natan Sheransky and Johnny Depp have had on the world around them through their courage and good deeds.

As he talked from the stage with a DePauw student in the audience, Kasich told the undergraduate, "There's never has been anybody ever made in the history of the world who is like you.  Think about that. And do you know there will never be another person ever made that will be like you?  You're unique.  You have gifts.  You have a special purpose, you have a destiny, you have a calling ... Nobody can take your place; nobody can do what you were destined to do."

The former governor and nine term congressman urged students to think about their individual destinies. "What are we doing today about life here, our temporal existence, and perhaps our eternal existence." 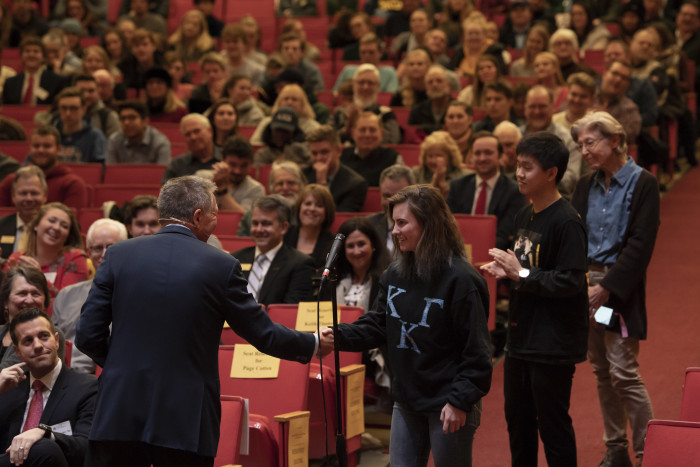 Urging his audience to think about the impact they can have upon the world and that life is finite, he asked, "Are we living a life here bigger than ourselves? Now nobody's applying for sainthood here, I'm the first one to say I'm the farthest thing away from it;  I make terrible mistakes.  But I can get up the next day and think, 'How can I be impactful?  How can I change the world?'  And it's not just a discussion for fancy philosophers, it's a discussion for all of us and our families and in our school and in our workplace -- wherever we are. 'Cause that's how we find satisfaction in life, when we live a life a little bigger than ourselves."

Kasich said, "I love to come to these campuses because students always want to know, 'How can I keep my principle and not be a divider?'  You're gonna be criticized.  Anybody who makes decisions and is willing to walk a lonely road -- and that's what a leader is, and we're all a leader to somebody -- there will be criticism."

Kasich stressed, "Part of the 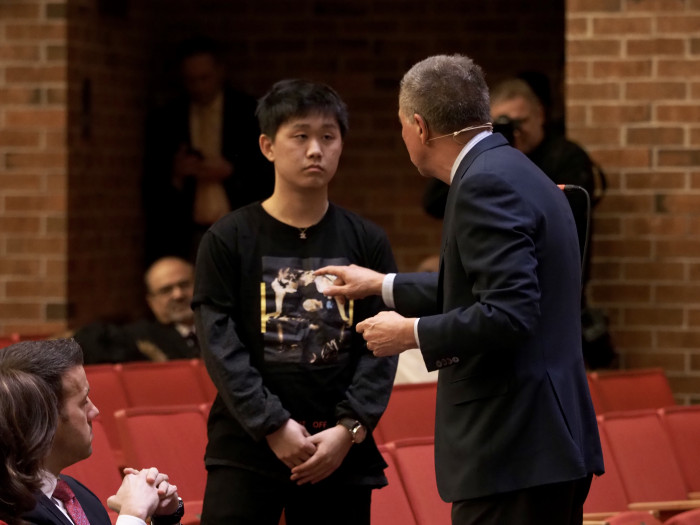 elixir for solving all the political fighting is when you live a life a little bigger than yourself -- when you're working at the food bank, when you stand up for somebody he's being bullied, when you in that sorority invite someone who's been an outcast to have dinner or go to a party with you -- that's when we forget all this nonsense, this fighting that divides this country.  Because divided we don't stand very well.  United we do."

Kasich asserted, "We need to get out of our silos.  Please folks, read lots of stuff.  Don't only read those things you agree with or watch television so they reinforce all the things that you think. We want to know how do we end this division in this country?  Well it starts with you and me, it doesn't start with somebody else."

Power comes from the bottom up, not the top down, Kasich stressed, and young people will play an important role to change the course of 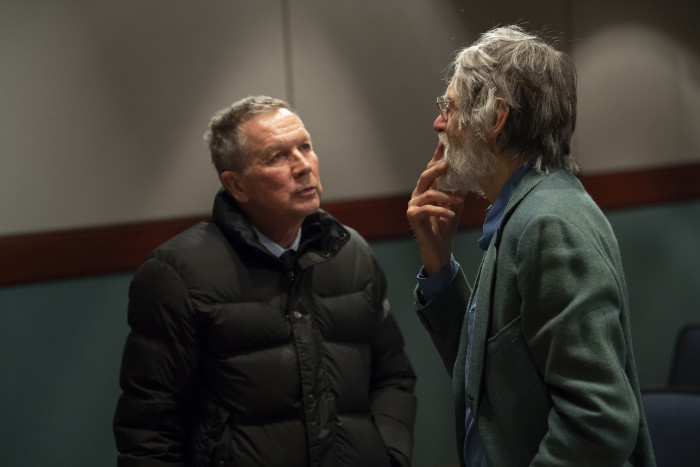 the nation.  "I love these millennials.  You know why?  They'd rather take a job that pays less as long as it has meaning.  See, my hope is in the young generation."

The former governor's day at DePauw began with a news conference at the Memorial Student Union building.  He then took questions from students for an hour at the Pulliam Center for Contemporary Media, followed by a reception and dinner with DePauw students, faculty and alumni. (above: Kasich talks with Bruce Stinebrickner, professor of political science) 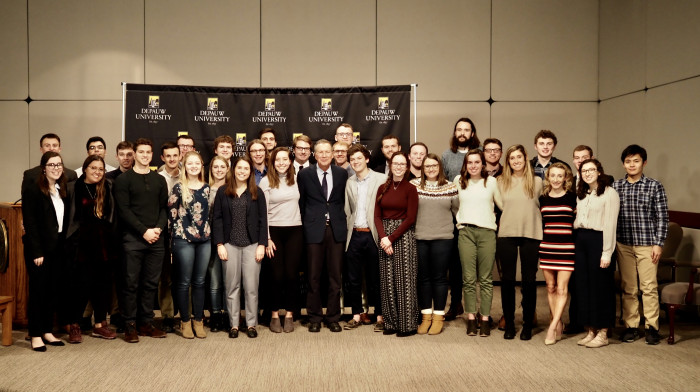 The program was originally scheduled for last night, but bitter cold temperatures -- which forced DePauw and many other colleges to close for a day -- caused a postponement. 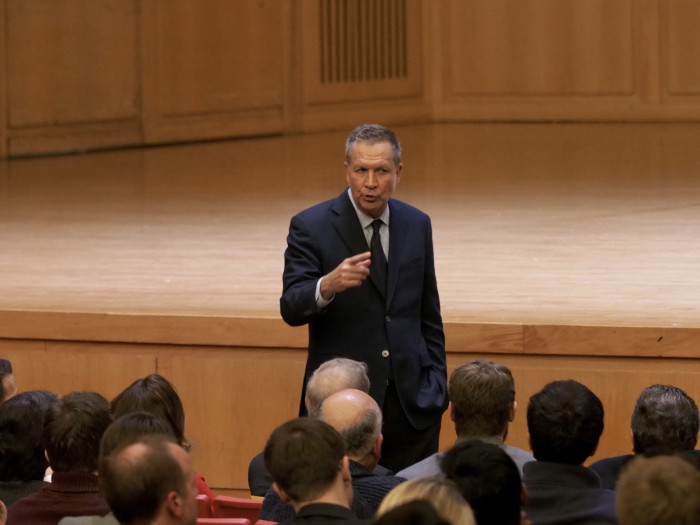 Kasich came down into the audience during the question-and-answer session that followed his address, and the first query addressed "the elephant in the room," his future plans.

"I don't know what I'm gonna do, because I don't want to go on, like, some wild goose chase. I also don't want to run so I hurt somebody else, I'm not interested in that."

He continued, "This is the most crazy time in politics.  Things that you think are going to happen never happen, and the things we said would never happen are happening.  It's completely crazy.  So, I don't know, but I don't want to shut doors and I don't want to say that I wouldn't run again," said the man who sought the White House in 2000 and 2016 and who did not endorse nor vote for Donald Trump.

Of the recently announced presidential aspirations of former Starbucks CEO Howard Schultz, Kasich said, "I just think it's terrible how they are viciously attacking him. I mean, he has 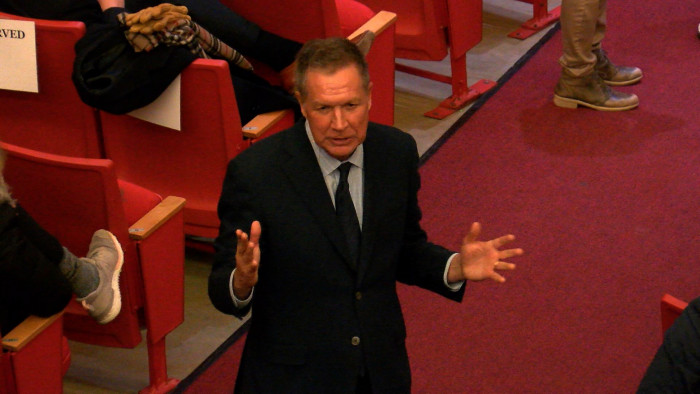 a right to run and he can run any way he wants to, this is America."

The author of four New York Times best-sellers, Kasich continued as he pointed to the right, "Here's the way I look at it: if you have Donald Trump and somebody on the far left, there may be an ocean of people who say, 'I don't like either choice.'  And they may for the first time actually light up to a third party candidate who could win.  I don't know that that's gonna happen."

Recalling a discussion he had with DePauw students earlier in the day about third party possibilities, he said, "If you go to the store to buy shoes and neither of the department stores have the shoes you want, but, 'I just opened a little store and I got the shoes,' where are you gonna go?  And so that's the real question. 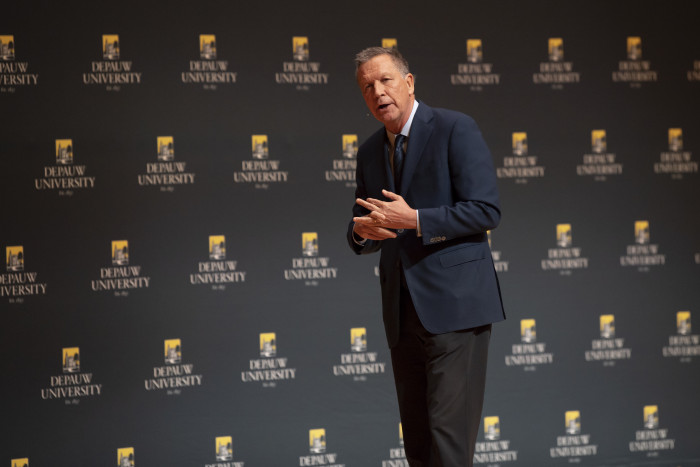 If the major parties cannot begin to respond effectively to what people in this country want there will be multiple parties."

The world is changing rapidly, with cars that drive themselves already here and flying cars in development, Kasich pointed out.  "The things that are happening in this world are happening so fast and they're so cool and they're so amazing, why would we think that politics is immune to change? So we're gonna have to see."

As a citizen and a voter, Kasich told the audience, "You know what I want to know?  Do you understand me, do you care about me, will you represent me?  Before I hear about all your fancy platforms we want to know, in this world that's changing so fast, are there people that can go and represent us in a far away place who get us, who understand us?"

The evening included several humorous moments, including a friendly exchange between the guest and first-year student Peter Skaluba, who offered Kasich two minutes of campaign advice. "Let's see what you got kid," the veteran politician cracked. Kasich listened, thanked the student and said, "Are you available to be hired? That's a lot of good advice."

Kasich, who has a number of DePauw friends, called the University "a great school .. It's classy, it's smart -- you look at the graduates. it's pretty impressive -- 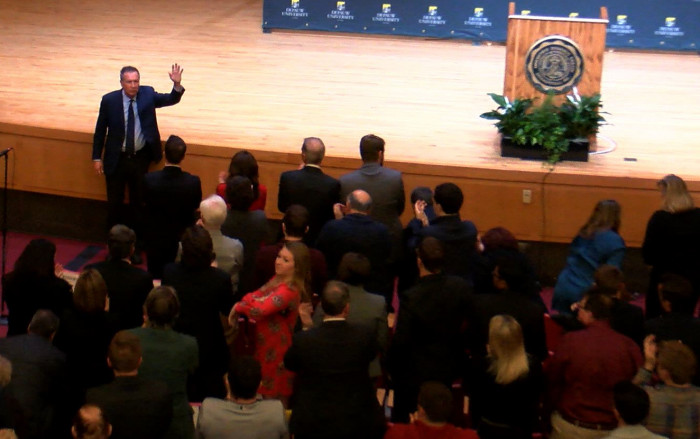 Vernon Jordan, one of the great senior statesman in our country today, Dan Quayle went here, Vice President of the United States ... I love Lee Hamilton, who's another great one."

He received a standing ovation from the crowd of approximately 800.

The speech by Gov. Kasich marked the second Ubben Lecture of the 2018-19 academic year.  Juan Manuel Santos, the former president of Colombia and the 2016 recipient of the Nobel Peace Prize, visited DePauw October 22. 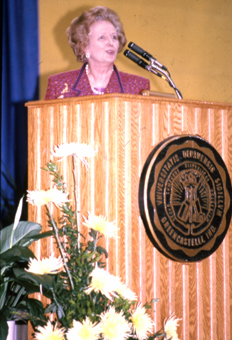 Established in 1986 through the generous support of 1958 DePauw graduates Timothy H. and Sharon Williams Ubben, the Ubben Lecture Series was designed to "bring the world to Greencastle." The series has now presented 113 events over the past 33 years.