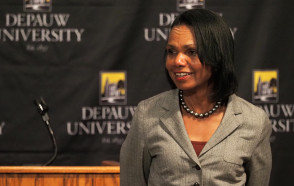 "I think it's fair to say that the international system feels, at this point, a bit chaotic," the 66th Secretary of State of the United States, Condoleezza Rice, told an audience at DePauw University tonight.  "It feels even dangerous.  And I want to suggest to you that the reason that that's the case is that we're not actually experiencing a crisis here or there ... but rather what we're seeing is the kind of breakdown of the order as we've known it and come to take it for granted for the last 70-plus years," she told a crowd of 1,260 in Kresge Auditorium.

Presenting a Timothy and Sharon Ubben Lecture, Rice, whose latest book is To Build a Better World: Choices to End the Cold War and Create a Global Commonwealth (co-authored by by Philip Zelikow), presented opening remarks and then engaged in a conversation with her friend, 1974 DePauw graduate Kathy Fortune Hubbard, a businesswoman, public policy activist and philanthropist who is a founder of two nonprofits: The Policy Circle and Bridges of Understanding. She serves on the board of the American Federation 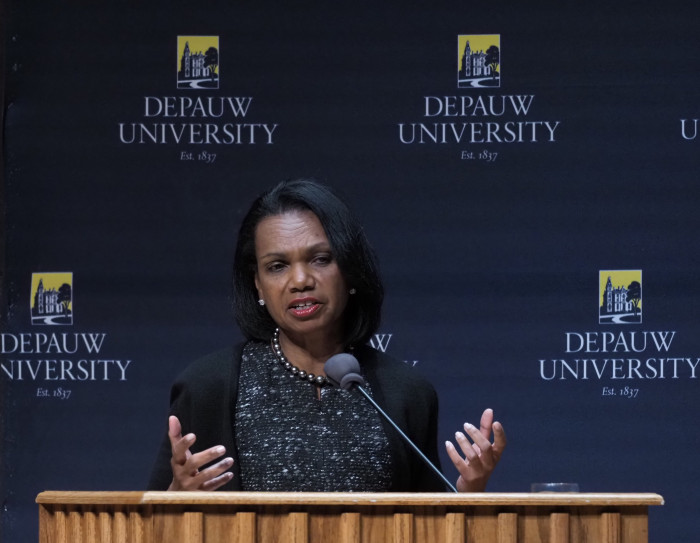 for Children and DePauw's Board of Trustees.

Hubbard asked Rice to analyze some of the world's hot spots, and to assess whether race relations are better or worse in 2019 America.

Rice served as Stanford University’s Provost from 1993 to 1999, during which she was the institution's chief budget and academic officer. As Provost, she was responsible for a $1.5 billion annual budget and the academic program involving 1,400 faculty members and 14,000 students. In 1997, she also served on the Federal Advisory Committee on Gender - Integrated Training in the Military.

From 1989 through March 1991, Rice served on President George H.W. Bush’s National Security Council staff. She served as Director; Senior Director of Soviet and East European Affairs; and, Special Assistant to the President for National Security Affairs. In 1986, while 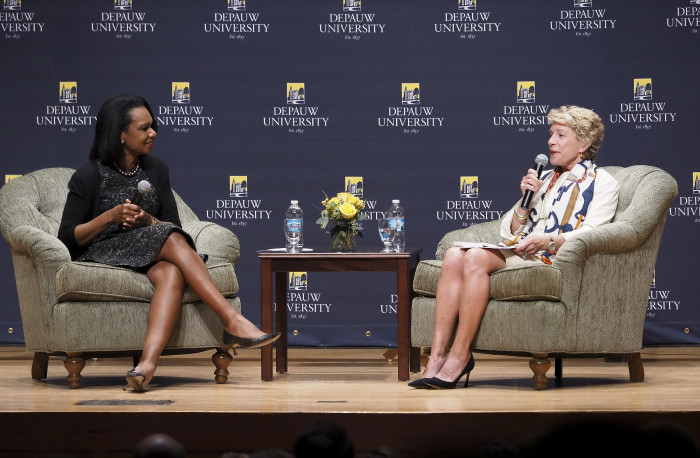 an international affairs fellow of the Council on Foreign Relations, Rice also served as Special Assistant to the Director of the Joint Chiefs of Staff.

Condoleezza Rice's day at DePauw included a meeting with about a dozen faculty members who discussed higher education issues in a roundtable setting. A college professor for about 30 years, Rice then led a class for about 50 DePauw students from different disciplines. The session -- driven by questions from the undergraduates -- examined post-9/11 foreign policy decisions, queries about leadership and personal inspiration, and a student inquiring how Rice would like to be remembered. The former Secretary of State leaves that for history to decide, but said she is most proud of her work as an educator, hoping she is recalled as "a professor who changed lives."

A member of Alpha Chi Omega, Rice stopped by the sorority's alpha chapter to meet with members and pose for a photograph. 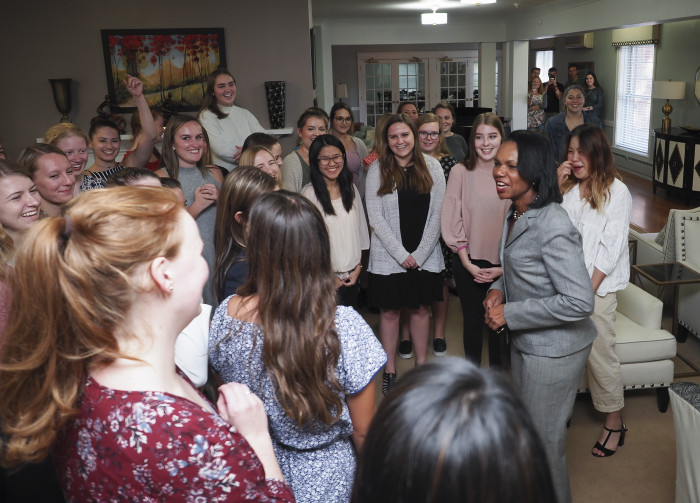 Rice then attended a reception at DePauw's presidential residence, The Elms, which was attended by students, faculty, staff and alumni.

The question-and-answer that ended the evening included Rice's thoughts on how her talents as an accomplished pianist have impacted other areas of her life, her fondness for the Indianapolis Colts (including now-retired former Stanford graduate and 2015 Ubben Lecturer Andrew Luck), and a very young member of the audience asked Rice -- a rabid football fan -- who she favors to win this fall's Monon Bell game.

As the audience roared a smiling Rice offered, "Of course, DePauw's gonna win the game. I did learn a lot about the history of the Wabash and DePauw game -- rivalry games are terrific and the great thing is if you win you get to keep it for a whole year. So let's go DePauw," she said to more cheers. 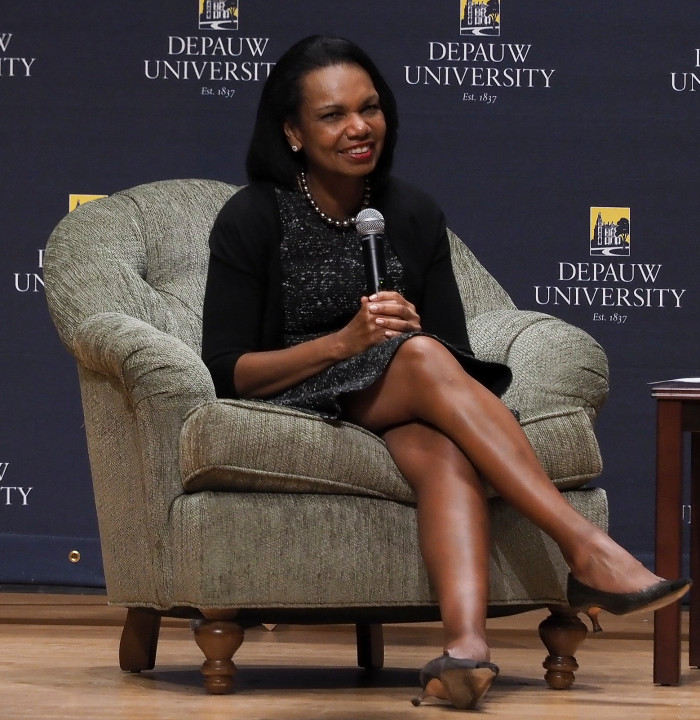 Rice told the DePauw audience that as far as the future is concerned, "I'm optimistic because of places like this. I meet young people who are determined to change the world." She added, "I've taught for more than 30 years and it is absolutely the case that this is the most public minded generation I've ever taught. They want to do things bigger than themselves -- they're in a bit of a hurry ... If we are going to come to a place where we can defend the notions of free markets and free peoples, where we don't weaponize our identity against one another, and where somehow we find a common project again here in America and, therefore, to go out and lead abroad, they're gonna have to lead it. And that's why places like this are on the forefront of solving the world's greatest problems."

During the evening lecture, Dr. Rice thanked  1958 DePauw graduates Tim and Sharon Ubben, "who support this wonderful lecture series."  She added, "I'm very involved in the Boys and Girls 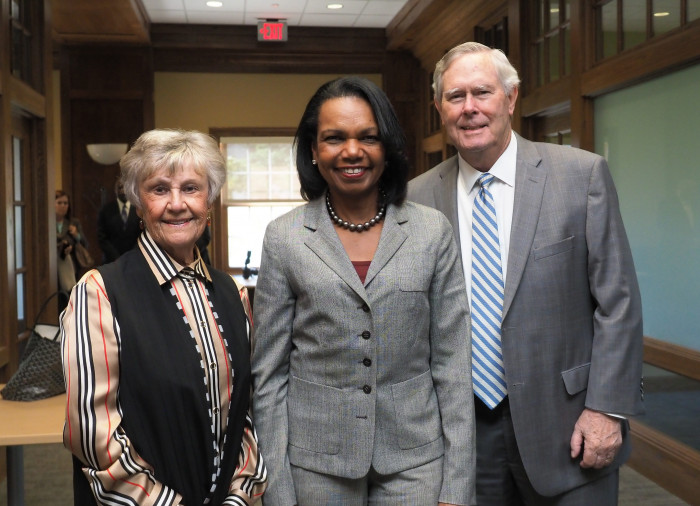 Club movement nationwide and I know that you are, too, and what you did for Indianapolis. I just want to acknowledge that, thank you very much."