Listed on the National Register of Historic Places. 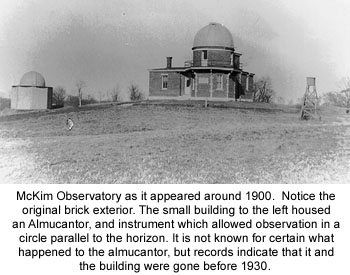 McKim Observatory was built in 1884, in the same time period as the rebirth of Indiana Asbury University as DePauw University. Washington C. DePauw, who became president of the board of trustees of the university in 1881, was convinced that an observatory was an important part of his plan to strengthen and expand the university. He was able to convince his friend, Robert McKim, of the need for an observatory. A prosperous contractor from Madison, Indiana, McKim's hobby was astronomy. McKim agreed to donate $8,000 for the construction and equipping of the observatory, provided that the name of the university be changed to DePauw University. The trustees agreed, and provided an additional $2000 so that the observatory would be a high quality facility.

The first directorship was given to professor John P.D. John. In planning the new facility, John and McKim toured many prominent observatories in this country to decide which features to incorporate. Their careful planning resulted in a fine observatory. In a report to The Sidereal Messenger (December 1885), assistant director Wilbur V. Brown states of the Clark telescope, "...its performance does not leave anything to be desired". It is also interesting to note that in the same report, Brown states that throughout the planning, construction and equipping of the observatory the goal was to provide a facility for both research and instruction of students.

The land for McKim Observatory was purchased in January of 1884. At that time it was a track of rolling farmland about a mile from campus and the highest ground for several miles. At one time there were plans to move the entire university to this location, but by 1901 those plans were dropped. In 1885 the university built a home nearby for the director of the observatory. Over the years the area has become entirely residential, and many DePauw faculty homes are in the immediate vicinity.

Wilbur Brown became the director of the Observatory in 1889, and remained director until his death in 1928. He was succeeded by William E. Eddington, who ran the observatory from 1930 to 1953. After that various members of first the mathematics, and now the physics departments, have been in charge of McKim. 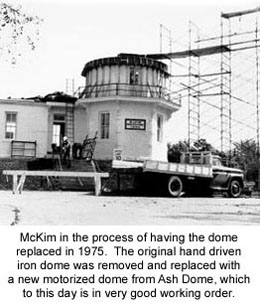 It appears that the facility was not well maintained in the late 1950's. In 1959 there was a recommendation that it be scrapped. Fortunately that did not happen. In the early 1970's the first steps towards renovation were taken. The Clark telescope was cleaned and repainted. An electric tracking system was installed. In 1975 the original iron dome was replaced with a motorized dome which is still in use. In 1979 McKim Observatory was placed on the National Register of Historic Places thanks to the work of Charlotte Dudley.

A second era of restoration began in the early 1980's. Professor Howard Brooks and a team of students did extensive cleaning and repair work at the observatory. The chronograph and transit telescope were returned to working order. The electrical clock drive was removed and the original gravity drive was reinstalled on the Clark refractor. Interior walls were stripped and repainted and the oak floors were refinished. In 1985 a deck was added over the roof of the library, providing convenient observing space for classes and special groups.

More details on the history of McKim can be found in the following articles: