McKim Observatory still houses many of its original instruments, including a 9.53 inch Clark Refractor telescope, a meridian transit telescope, and a gravity driven chronograph. Missing from the early equipment is an Almucantor which was housed in a separate small building near the Observatory. 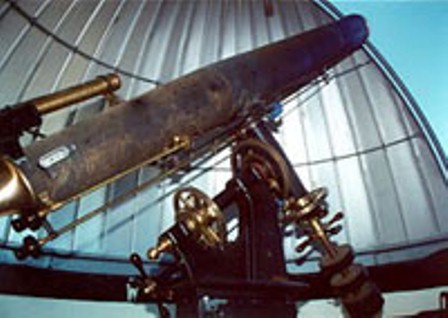 The main telescope is the original 9.53 inch refractor built in 1885. The objective lens was made by Alvin Clark and Sons of Cambridge, Massachusetts, and has a focal length of 12 feet. The telescope and pier were produced by Warner and Swasey of Cleveland, Ohio. The original brass finder scope is still mounted along the main telescope, but is supplemented by a new Orion finder scope. The original "wind up" gravity driven tracking clock has been reinstalled in the pier, and is accessible through a glass door. Placing the tracking clock within an opening in the pier was a new design by Warner and Swasey. When fully wound, the clock will drive the telescope for 20 minutes.

The telescope support is entirely separate from the rest of the building. The telescope is mounted on a cast iron pier which stands on top of a masonry pier. Underneath the pier is a four foot thick layer of clay which was specially installed. The clay layer and pier structure serve to damp vibrations caused by the blasting in nearby stone quarries which continues today.

The Clark Telescope resides in the "equatorial room" on the second floor of the Observatory, and is accessed via a spiral oak staircase. The original iron dome weighed two tons, yet could be rotated by hand with only 12 pounds of force. The original dome was replaced in 1975 with the current motorized dome manufactured by Ash Dome.

The optics of the Clark telescope are superb. It provides exceptional views of planets and nebula. Details in the cloud bands of Jupiter may be observed, the impact features from comet Levi-Shoemaker with Jupiter were easily visible, cloud features on Saturn may be seen, and views of the Orion Nebula are spectacular. 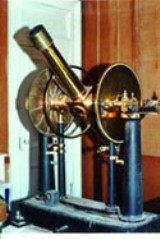 McKim is home to a brass meridian transit telescope with a 16 inch meridian circle made by Fauth and Company of Washington D.C. This type of instrument is a combination of a transit, which observes objects crossing the local meridian, and a meridian circle, which measures the zenith angle of astronomical objects. 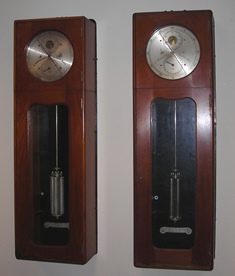 The original observatory clocks still exist in working order. The two clocks are Howard #74 astronomical regulators. One clock operates on sidereal (sahy-deer-ee-uh'l) time and the other on solar time. The two clocks were essential instruments to observations with the meridian transit telescope. The clocks were electrically connected to the chronograph. Originally, the clocks were housed in a small climate controlled room attached to the masonry pier in the octagonal room below the equatorial room. Currently the clocks are on display in the Math Department of the University. 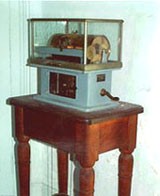 The time record is made on a piece of paper wrapped around a cylindrical drum. The drum revolves at a constant rate, driven by falling weights. A recording pen moves horizontally along the drum at a slower rate. The resulting pen trace is a spiral around the drum. The pen was electrically connected to a clock which was designed to interrupt the electric circuit at precise intervals, thus producing a mark on the paper chart. The even marks along the chart provide a basis for recording time measurements. Additional marks are made corresponding to the time of astronomical observations.

The observer at the telescope used a telegraph key connected to the pen on the chronograph to mark the time of observations. After the paper is unwound from the drum, the timing of astronomical events can be determined from the distances between the clock marks and the observer's marks. The original electric potential for the clock was supplied by a series of Daniels cells (wet battery) using copper and zinc electrodes in an acid bath.

Other original instruments which still exist today include an astral lantern (in poor condition), a celestial globe used for teaching, and an early camera. The original ladder with adjustable seat for reaching the focus of the telescope at different heights is still in use.

Several pieces of modern equipment have been added to McKim for use by current students. The observatory houses three 8" and one 11" Celestron Schmidt Cassegrain telescopes, a 17" Dobsonian reflector, an SBIG St-6 CCD camera equipped with standard UBVRI filters for photometry and red, green, and blue filters for color images, and a wide assortment of new eyepieces. The Celestron telescopes are easily mounted on permanent piers set up in the observatory yard, and are used by students taking the introductory astronomy classes at the University.