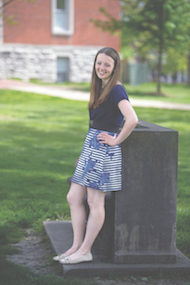 Her major: Biology and English literature

Her thesis: The Feral Cat Conundrum: Assessing the Science and Ethics of Trap-Neuter-Return

A living work: “I didn’t realize that our thesis projects could continue beyond DePauw. I am presenting my thesis at an environmental studies conference in San Diego and hope to publish my work in some form.”

Creative Research: Writing the Unknown in Fiction
HONR 300Aa: Arts and Humanities with Professor Sarah Gerkensmeyer
Most creative writers are familiar with the advice to “write about what you know.” What about Eudora Welty's advice: “Write about what you don't know about what you know”? How can a sense of the unknown and the unexplored ultimately fuel strong fiction? In this class, we will read fiction by authors who conducted research on subjects and phenomena they initially knew nothing about, spanning scientific disciplines, uncharted locales, cultural movements and beyond. How do these authors pick and choose which details to incorporate into their fiction? Compared to writers of other genres such as journalism and nonfiction, do fiction writers have different or looser expectations when it comes to accuracy and the sliding scale of fact vs. fiction? From closely reading academic articles, to browsing Wikipedia, to watching hours and hours of YouTube videos, the world of creative research can be a strange and liberating one. Students will read and discuss fiction that incorporates creative research. They will also conduct their own research on topics they know little to nothing about and write fiction inspired by that experience. This course will integrate experiential learning such as auditing a few classes in a course outside of a student’s own discipline. While this course is in many ways a creative writing class, no previous creative writing coursework is required.

Musical Firsts and Their Resonance in History and Re-Performance
HONR 300Ab: Arts and Humanities with Professor Matthew Balensuela
As an art that exists in specific performances in time, a musical work navigates not only the history of its creation and first performance, but also a later history of subsequent performances, reinterpretations, and reimaginings. The meanings and interpretations we have today of Handel’s Messiah are quite different than at its premiere in 1741. Likewise, we hear the Sgt. Pepper album by the Beatles in ways its creators could not have imagined in 1967. This course will focus on a small number of works from the western concert repertoire (such as Beethoven’s Fifth Symphony and Mozart’s The Marriage of Figaro) and popular music (including early recordings of Louis Armstrong and the Broadway musical West Side Story) to consider the context of their creation as well as their later recreations and interpretations. In this way the course will touch on not just the musical works, but on broader issues of history, consumerism, racism, and technology. The course is open to all students; the ability to read music notation is not a prerequisite for the course.

Evolution and Human Nature
HONR 300Ba: Natural Science with Professor Kevin Moore
The Philosopher Daniel Dennett once called evolution “the single best idea anyone ever had.” If this claim has any merit, then surely evolutionary perspectives can shed light on important questions about human nature in general, and issues like cooperation, aggression, sex and gender, aesthetics, emotion, cognition, moral judgments, and environmental concerns in particular. We will look at current and historical attempts to develop scientific accounts of human nature, and examine their strengths, weaknesses, and motivations.  The course offers an opportunity to explore how the “single best idea anyone ever had” can be applied to human nature and important contemporary concerns.

Where are we?  A reflective romp through the history of ideas concerning the nature of our universe and reality
HONR 300Bb:  Natural Science with Professor Alexander Komives
The sky has inspired a wealth of thought about the existence and workings of our greater world, and by world I mean all that can be seen from your smartphone right up to the farthest galaxies balanced on the edge of creation and perhaps even beyond where imagination and our inherent sense of beauty are our only guides, treacherous as they may be. With a combination of readings, activities and discussion we will trace the beginnings of science and our developing understanding of time, motion and matter.  The only prerequisites are a strong curiosity and a willingness to be exposed and work through mind-stretching ideas, no special training in math or physics needed.

Climate Crisis and Social Change: From Ancient Mesopotamia to Your Own Backyard
HONR 300Ca: Social Science with Anthony Anderson
Today’s anthropogenic global warming is unprecedented in scale, but climate change is not a new problem for human societies. What can history tell us about the relationship between people and a changing climate? How did people in the past understand the environment around them, and how did that perception shape their response? Who, exactly, is a climate refugee? What does your class, race, and gender have to do with how you experience the environment around you? Has climate change caused wars, or made them more destructive? This class explores these questions, and others, in ancient, early modern, and contemporary case studies from around the world. By taking a historical perspective on climate change, students will learn that human behavior is never predetermined by environmental forces—but it is conditioned by them, along with politics, culture, food production, trade, and available technology. In addition to historical scholarship on climate change, students will use satellite photos, fossil pollen records, art, ice cores, and “Cli-Fi” novels to critically assess what it means to live in the “age of humans.”