August 24, 2004, Greencastle, Ind. - Two prominent alumni of DePauw University will be returning to their alma mater this year as Distinguished Visiting Professors. ABC News correspondent John McWethy '69 will spend the early part of the fall semester working with student media as the John D. Hughes Distinguished Visiting Professor. Joseph Flummerfelt '58, regarded as the premier choral director in the United States, will be on campus in the spring to direct the choirs as the Elizabeth P. Allen Distinguished University Professor, and will also be available as a consultant to the School of Music and the choral program throughout the year.

"This is a wonderful example of one of the many ways our alumni 'give back' to DePauw and, by doing so, enrich the University and its students," says Neal B. Abraham, executive vice president of the University, vice president for academic affairs and dean of the faculty. "The expertise that these two gentlemen bring back to campus is immeasurable, and their willingness to contribute their time and talents to DePauw speaks volumes of the feelings they hold for their alma mater. We're delighted to welcome them." 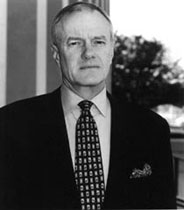 John McWethy will be in residence for two weeks early in the fall semester to work with both the advisers and the student staff members of The DePauw, WGRE, and D3TV. He will conclude his residency with participation in the Issues for America symposium in the middle of September (read more here). The chief national security correspondent for ABC News since 1984 and a fixture on the network since 1979, McWethy was at the Pentagon on September 11, 2001, when the building was struck by an American Airlines passenger plane, and was heavily involved in ABC's coverage of the aftermath. McWethy went to Tora Bora in Afghanistan -- traveling with U.S. special operations teams there -- as the hunt for Osama bin Laden continued.

The recipient of five National Emmy Awards, McWethy's assignments have included coverage of the air war over Kosovo, tensions in the Persian Gulf and in North Korea, and the India-Pakistan conflict. He spent months in Bosnia before and after American troops arrived, and visited Liberia during the worst of the fighting, when the US Embassy was under siege. Assignments have also included reports from Haiti, Somalia, Mozambique, Russia and the Middle East. McWethy has traveled to more than 50 countries, covering the collapse of the Soviet Union and the rise of the new nations that replaced it. A 1969 graduate of DePauw, he holds a Master of Science degree from Columbia University's Pulitzer School of Journalism. In 2002, he was awarded an honorary doctorate from DePauw. McWethy returned to deliver the commencement address in 2003, when he also was honored 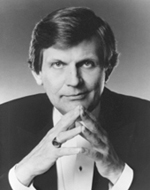 by his alma mater with the McNaughton Medal for Public Service (access a story with video and audio clips here).

Called "the greatest choral conductor in the world" by Leonard Bernstein and named 2004 "Conductor of the Year" by Musical America, Joseph Flummerfelt will be in residence for three weeks early in the spring semester to direct the choirs. He will also be available as a consultant to the School of Music and the choral program throughout the year. One of the nation's most acclaimed chorus masters, Joseph Flummerfelt served for 33 years as the artistic director and principal conductor for the world-renowned Westminster Choir College of Rider University. Retiring at the end of the 2004 season, this fall, he will become conductor laureate of the Westminster Choir.

One of only three artistic directors for the Spoleto Festival USA in Charleston, S.C. since 1977, he was for 23 years the Maestro del coro for the Festival dei Due Mondi in Spoleto, Italy. He is also the chorus master for the New York Philharmonic and music director of the New York Choral Artists, which he founded in 1979. A 1958 graduate of DePauw, he holds a Master of Music from the Philadelphia Conservatory of Music and a Doctor of Musical Arts from the University of Illinois, both in choral conducting. His many honors include le Prix du President de la Republique of L'Academie du Disque Français, two Grammy nominations, and four honorary degrees, including the Doctor of Music from DePauw in 1982.

The John D. Hughes Distinguished Visiting Professorship was established with a gift from John D. Hughes, Class of 1931. An attorney by training, he practiced law in Indianapolis for a half century and at one time served as the national president of the DePauw Alumni Association.

The Elizabeth P. Allen Distinguished University Professorship was established with a gift from Elizabeth Pfeffer Allen. A 1956 graduate of DePauw, she received a Bachelor of Arts degree in English literature.