October 27, 2006, Greencastle, Ind. - U.S. Senator Richard G. Lugar, "the uncontested foreign policy heavyweight in the Senate today," is the subject of this week's Indianapolis Star column by DePauw University's Ken Bode. The Eugene S. Pulliam Distinguished Visiting Professor of Journalism notes that Lugar, the longtime Republican, faces no opposition in this year's election. Bode asks, "Assuming Republicans continue to control the Senate, how will Lugar use his considerable prestige and the power of his chairmanship of the Foreign Relations Committee to help find our way out of this gruesome and failing effort in Iraq? Lugar supported the war at the outset, but despite a definite tone of skepticism in the many letters he has sent to colleagues discussing the security, economic and political conditions in Iraq, he has never noticeably broken with the administration on the war."

Despite President Bush's assertion this week that "We are winning" in Iraq,

"the evidence otherwise is undeniable," Dr. Bode continues. "Newsweek columnist Fareed Zakaria put it succinctly: 'It is time to face the terrible reality that America's mission in Iraq has substantially failed.' Neither Republicans nor Democrats have an idea for ending this disaster." (at right: Sen. Lugar at DePauw in October 2004)

The professor wonders, "Why has Lugar been so quiet? Perhaps it is this: Bush, Cheney, Rumsfeld and Rice value loyalty over everything, so to break publicly with their Iraq policy, Lugar would forfeit any possibility of private influence. But who does have any influence with this crowd?" 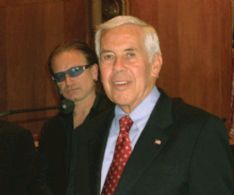 who formerly reported on politics for CNN and NBC, Bode concludes, "Soon after Thanksgiving, the Iraq Study Group, led by James Baker and Lee Hamilton, is scheduled to report, hopefully offering a practical middle ground between immediate withdrawal and finishing the job. That would be a good time for Lugar to use the Foreign Relations Committee and his considerable prestige to further that effort. America's international reputation is in tatters and our leadership throughout the world has been undermined. We need to hear more from Sen. Richard Lugar."

Last week, Ken Bode suggested the "time is right" for a presidential bid by Democrat Barack Obama. Learn more in this previous story.