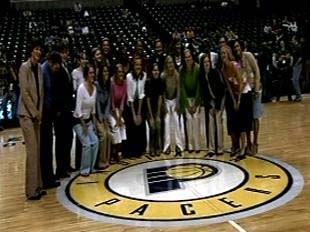 [Download Video: "Pacers Salute the National Champs" - 3722kb] "Let's hear it for these national champions," Indiana Pacers public address announcer Reb Porter exclaimed as he and the NBA franchise welcomed the NCAA Division III women's basketball champions of DePauw University to Conseco Fieldhouse tonight. Coach Kris Huffman and her team were recognized at mid-court of the stadium a few minutes before the Pacers tipped off against the Washington Wizards.

"They finished the year 31 and 3, and defeated Washington University of St. Louis, 55-52, in the championship game," Porter told the Pacer faithful. Queen's We Are the Champions played as the Tigers posed for a few pictures and received cheers from the crowd.

Thanks go to Mike Henn, director of sales development for Pacers Sports and Entertainment and 1980 graduate of DePauw University, who provides the video that accompanies this story.  What you see is the live feed that appeared on the team's scoreboard.

Video highlights of the March 17 national 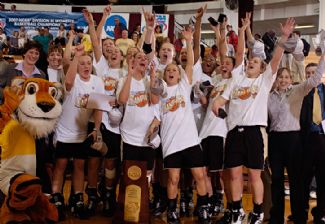 championship game (which was televised nationally on CSTV) and the Tigers' celebration can be accessed in this previous story. Senior Liz Bondi was featured in the April 9 edition of Sports Illustrated, and you'll find comprehensive coverage of the team's historic season by clicking here.