February 27, 2011, Greencastle, Ind. — "Holly Bailey has become the third generation of her family and the first woman to serve as president of the Associated General Contractors of Illinois," begins a feature in the Journal Gazette of Mattoon, Illinois. A 1992 graduate of DePauw University, "Bailey, president of Howell Asphalt Co. and senior vice president of Howell Paving Inc. in Mattoon, was elected to a one-year term as AGCI president in December during the highway/heavy and utility construction association's annual convention and business meeting in Springfield." (photo: Ken Trevarthan/Mattoon Journal Gazette)

Rob Stroud writes, "The president's position for AGC of Illinois was held in 1969 by Bailey's grandfather Virgil Howell, who founded his Mattoon company 60 years ago, and in 1989-90 by her father, Charles Adams."

"We have been involved in AGC of Illinois for a long time," Bailey tells the newspaper. "They represent their 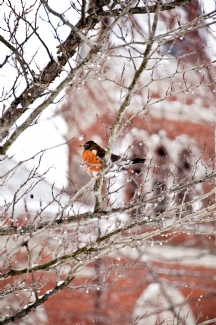 Stroud reports, "Bailey, who has been on AGC's board for five years now, has been part of the construction industry since she was in high school, when she worked part-time typing and filing at her family's business. She continued working in the summers for Howell in various capacities while she obtained a bachelor's in economics from DePauw University and a master's in business administration from Texas Christian University. After graduating from Texas Christian, Bailey worked for four years in executive recruiting before returning to the family businesses."

An economics major at DePauw, Holly Adams Bailey states, ""Besides the AGCI, I serve as treasurer for the Mattoon Area Family YMCA and sit on the board of directors of Coles Together. Whatever talents we possess we need to share to benefit the community and our industry. Now it is my turn to do just that."

You'll find the complete article at the Journal Gazette's website.