Ford was born on June 7, 1940, in Salt Lake City, and earned bachelor's and master's degrees in journalism from the University of Utah. After a lengthy career in print and broadcast journalism, Ford came to Greencastle in the spring of 1992 when he was named executive director of the Society for Professional Journalists (SPJ). The organization, which was founded by student journalists at DePauw University as Sigma Delta Chi (SDX) in 1909, is the nation's most broad-based journalism organization. SPJ had its national headquarters in Greencastle in the 1990s.

"Ernie Ford was selected because of his strong management experience in broadcast and print journalism," said 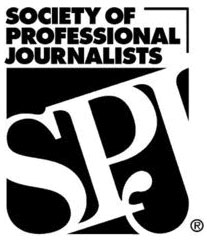 Georgiana Vines, assistant managing editor of the Knoxville News Sentinel and chair of the search committee, when Ford's appointment was announced.

Ford had served as SPJ's national president during 1991-92 before taking a paid post with the organization. He became a member of SPJ's national board of directors in 1984, when he was elected Region 9 director, and served as chair of the Ethics Committee, Publication Committee, and the Legal Defense Fund.

A regular lecturer to students in journalism classes and members of the DePauw Media Fellows program, Ford served as a part-time instructor in University Studies during the 2001-02 academic year. Ernie Ford and his wife, Linda, who survives, are also known to a generation of DePauw students as owners of the Fine Print Bookstore, which they operated on Greencastle's square for 15 years.

He also served as an adjunct instructor at the University of Utah, Brigham Young University and Utah State University. (photo, l-r: Ford and David Bohmer '69, director of the Pulliam Center for Contemporary Media Center and Media Fellows Program, 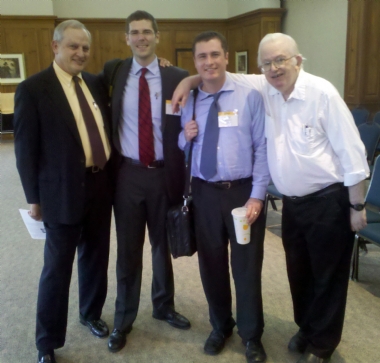 "Ernie was a great teacher who helped his students understand the media industry and journalism," recalls Andrew Tangel, a 2003 DePauw graduate and former editor of The DePauw who now a reporter at New Jersey's Bergen Record. "A former investigative reporter himself, he seemed to relish asking tough questions at public meetings on campus and in town. He passed along tips to student journalists and encouraged them to be aggressive, hard-nosed reporters."

Adds Eric Aasen, a 2003 DePauw graduate who also edited the student paper and is now a staff writer at the Dallas Morning News, "Ernie was crusty and colorful, a real character. He was an old-school journalist who was eager to share his experiences with students." According to Aasen, "Ernie had a genuine interest in student journalists -- in what we were covering and how we were covering it. He regularly read The DePauw and offered feedback and story ideas. DePauw students benefited by learning from such an experienced journalist. "

Before coming to Indiana, Ford's journalism career which included stints as managing editor of KSL-TV in Salt Lake City, assistant news director of KDFW-TV in Dallas, assistant city editor of the Salt Lake Tribune, wire editor of the Idaho Post-Register in Idaho Falls, and general assignment reporter for the Deseret News in Salt Lake City. He collected numerous journalism awards, including a 1980 Sigma Delta Chi award for broadcast public service, regional Emmys, the Eudora Welty Award and the DuPont Award. A strong advocate for the First Amendment and the rights of journalists, Ford testified before Congress in support of the Freedom of Information Act and organized a a petition drive that led move the U.S. Supreme Court to permit still cameras in the 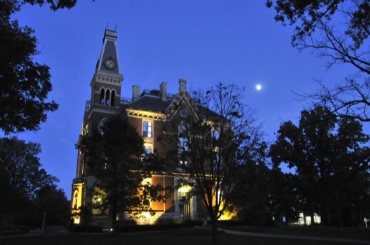 In 2006, Ford was inducted into the Hall of Fame of the Daily Utah Chronicle, the University of Utah's student newspaper, where he cuts his reporting teeth as an undergraduate and later served as faculty adviser.

A celebration of Ernie Ford's life will be held at 2 p.m. Sunday at the Putnam County Playhouse, 715 South County Road 100 East, Greencastle.

An obituary is accessible at the website of Greencastle's Banner-Graphic, with a tribute to Ford at the Salt Lake Tribune.