J. Nichols '89 on Cover of December Issue of Outside Magazine 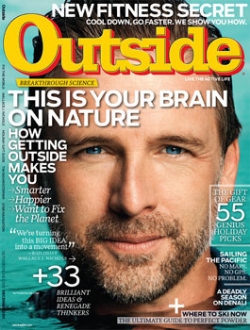 November 20, 2011, Greencastle, Ind. — "How does a visionary marine biologist convince brain researchers to help him revolutionize ocean conservation?," asks Outside magazine. "With lots of hugs, a million blue marbles, and one very unorthodox conference," it writes of Wallace J. Nichols, a 1989 graduate of DePauw University graduate, who is featured on the cover of the publication's December 2011 issue.

"Nichols, 44, is a biologist and research associate at the academy who made a name for himself in the mid-1990s when he tracked a loggerhead turtle that swam from Baja, Mexico, to Japan, the first time anyone had recorded an animal swimming an entire ocean," writes Michael Roberts. "He has done fieldwork in waters around the globe and spends most of his waking hours thinking and talking about the ocean, but when he’s in front of that big window at the aquarium, he doesn’t watch the fish. He watches the people."

"Whether it’s a 92-year-old or a two-year-old, when they come into that blue space, something happens," says Dr. Nichols says.

The text adds, "They grow quiet and calm, but there’s more to it than that. When couples walk in, they frequently start holding hands. He says that if you ask people here what they’re feeling, they’ll struggle for words. Nichols finds this fascinating. He also believes that if we can understand what really happens to us in the presence of the ocean -- 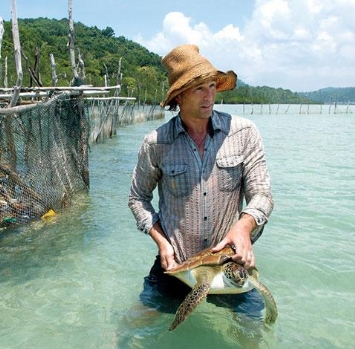 which brain processes underlie our emotional reactions -- it could bring about a radical shift in conservation efforts. If we learn precisely why we love the ocean, his thinking goes, we’ll have an immensely powerful new tool to protect it."

Read the complete article -- headlined "The Touchy-Feely (But Totally Scientific!) Methods of Wallace J. Nichols" -- at the magazine's website.

Learn more about J. Nichols in this recent story.