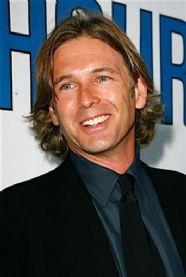 August 27, 2007, Greencastle, Ind. - "In a world full of exhaust fumes, marine biologist Wallace J. Nichols is like a breath of fresh air. But some of his words might make you choke," begins a story in the San Francisco Examiner. Nichols -- senior scientist at the Ocean Conservancy, research associate for San Francisco's California Academy of Sciences, and 1989 graduate of DePauw University -- tells the newspaper, "This is it. No kidding -- this is our 11th hour. We have to rise to the occasion" and address environmental issues.

Dr. Nichols "is turning heads with a slew of other like-minded scientists in The 11th Hour, Leonardo DiCaprio's much-ballyhooed eco doc, which opened Friday," writes Greg Archer. "The film grabs the Save-the-Planet baton from Al Gore (An Inconvenient Truth) and hands it off to the masses with the hope of sparking change in a world compromised after 200 years of industrial revolution. More than 50 scientists and dignitaries -- from Stephen Hawking to Mikhail Gorbachev -- are spotlighted in a project that DiCaprio produced and narrates, and sisters/filmmakers Nadia Conners and Leila Conners Petersen directed. Collectively these eco patriots issue a

warning: The planet can't be healed with a verbal bandage."

When it comes to global warming, Nichols tells the Examiner, "We are essentially talking about an ocean issue. Oceans make up 75 percent of the planet. If the planet is warming, the ocean is warming. If the ocean warms, even a little bit, we are in trouble. As go the oceans, so goes life on planet Earth."

J. Nichols, as he is known, will return to his alma mater for DePauw Discourse 2007: Sustainability and Global Citizenship, October 4-6. The 11th Hour will be screened during the three-day forum, which will also include talks by Robert F. Kennedy Jr. and Bill McKibben, Greg Watson, and others (McKibben and Watson also appear in the documentary).

Dr. Nichols was recently profiled in Good Times, a weekly newspaper in Santa Cruz. Learn more in this previous story.