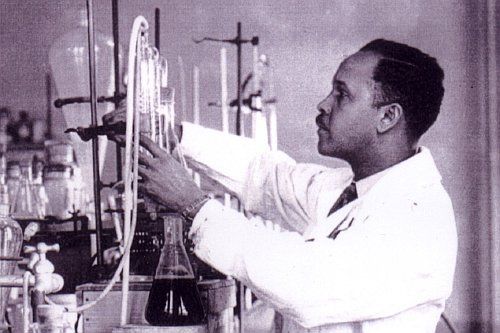 Today's "Google Doodle" -- the cartoon atop the main search page of Google.com -- is a sketch of Percy L. Julian, groundbreaking research chemist and 1920 graduate of DePauw University. Dr. Julian was born April 11, 1899 in Montgomery, Alabama, and today would have been his 115th birthday.

Graduated from DePauw with Phi Beta Kappa and valedictory honors in 1920, Percy Julian earned a master's degree at Harvard and the Ph.D. at the University of Vienna. In 1933 Julian accepted an appointment at DePauw as a research fellow at Minshall Laboratory, where he directed research projects for senior chemistry majors. His work brought about development of a low cost method of producing cortisone, as well as a synthethic drug for the treatment of glaucoma, and a fire-fighting foam that saved thousands of lives during World War II. The founder of research laboratories in the United States, Mexico, and Guatemala, Julian was a member of DePauw's Board of Trustees and was the first recipient of the University's McNaughton Medal for meritorious public service. He also received an honorary degree from his alma mater in 1947.  He died on April 19, 1975 in Waukegan, Illinois.n

The University's Percy Lavon Julian Science and Mathematics Center stands as a tribute to the great chemist.

Elected to the National Academy of Sciences in 1973, Percy Lavon Julian received19 honorary doctorates and in 1990 was inducted into the National Inventors Hall of Fame. In 1993, the U.S. Postal Service issued a stamp in Dr. Julian's honor.