A pair of DePauw University faculty members -- Yung-chen Chiang, professor of history, and Istvan Csicsery-Ronay, professor of English -- are the 2015 recipients of the Mr. and Mrs. Fred C. Tucker Jr. Distinguished Career Award. Presented annually by the president of the University to one or more senior members of the faculty since 1988, the Tucker Award is designed to recognize the achievements of those faculty members who have made notable contributions to DePauw by their commitments to students, teaching excellence, their chosen disciplines, and service to the University.

The Tucker Award was one of several honors presented at this evening's faculty recognition program, hosted by President Brian W. Casey at The Elms.

Rebecca L. Upton, associate professor of sociology and anthropology, was presented with the 2015 Edwin L. Minar Jr. Scholarship Award. Established in 1981, the Minar Award is presented in recognition of exceptional scholarly achievement by a faculty member and is named in honor of its first recipient, a former professor in the department of classical studies.

Pamela M. Propsom, Kenneth S. Wagoner Professor of Psychology and professor of psychology, and Jacqueline "Jackie" R. Roberts, professor of chemistry and biochemistry, are the recipients of the G. Bromley Oxnam Award for Service. Named after DePauw's thirteenth president 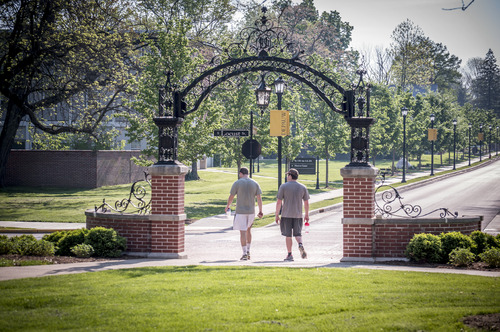 The evening's festivities included recognition of two DePauw faculty members who are retiring at the conclusion of the current academic year: Arthur "Art" B. Evans, professor of Modern languages (French), and Amy Lynn Barber, professor of music and former dean of the DePauw University School of Music.