Just “somebody to prime the pump” with a couple million dollars, to give some street cred to his Tumaini Global Health Foundation and its grand plan to start a medical school in Greencastle. And then, down the line a bit, another $30 million that would make the Tumaini Medical School for Global Health a reality.

Such largesse isn’t unprecedented, he pointed out, and the need is great. Tumaini would be only the third medical school in the world and the first in the United States dedicated to training physicians to care for underserved populations, whether in sub-Saharan Africa or downtown Indianapolis.

When the Indianapolis anesthesiologist really dreams big, he envisions someone doing for future Tumaini students what billionaire Ken Langone, co-founder of The Home Depot Inc., did in 2018 for medical students at New York University: Donate $100 million and raise another $350 million so the school will be tuition-free forevermore. For Mote and others on Tumaini’s board, the idea is that medical students without enormous debt might skip the more lucrative specialties and practice in underserved rural or blighted urban areas, domestic or abroad.

“That’s farther down the road,” Mote allowed. Millionaires and billionaires “are hard to get a hold of.”

But the medical school? “We think it’s doable,” he said. He has done a lot of homework; recruited the foundation’s board, which is replete with DePauw grads; attended conferences; visited med schools in California, Massachusetts and Texas; borrowed the financial studies done a decade ago during planning for the Marian University College of Osteopathic Medicine; and consulted with experienced fundraisers – including one on Tumaini’s board, retired attorney Jeffrey Lewis ’74, Mote’s roommate at DePauw, who raised money to establish 20-year-old University High School in Carmel, Indiana.

“The current COVID-19 pandemic illustrates the need for a different/renewed institutional focus on public health as well as individual health in medical education. … As we are now experiencing fully, public health issues have an almost infinite set of dimensions, which affect us all and to which we can all contribute.”
– Jeffrey O. Lewis '74, retired lawyer

Mote’s mission began out of his frustration with hospitals. “They seemed to be more about health care than health,” he said. “And not looking at the upstream social determinants of health, as they’re called – people’s behavior, living conditions.”

That prompted him to spend 2003 away from his medical practice to study at Harvard University for a master’s degree in public health. Later, “I went with DePauw’s students on a winter term in service project to Ghana and I just saw how much of a difference you can make just doing simple things.” He also volunteered his anesthesiology services in a program in Kenya operated by Thomas Burke, director of the Global Health Innovations Lab at Massachusetts General Hospital and a Harvard Medical School associate professor. 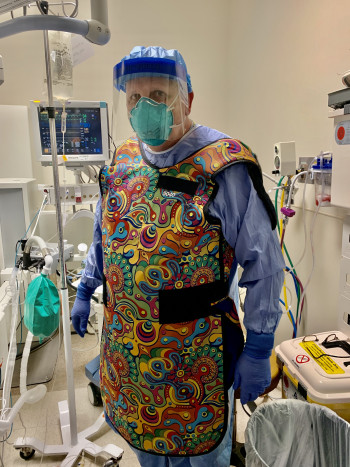 “In medical school,” Mote said, “you learn how to take care of one person at a time, an individual, whereas public health is all about populations, groups of people.” He told Burke that he wanted to start a foundation to teach college students about global health and “he said, ‘why not a medical school?’ So I started the foundation then.”

The foundation has a second purpose – to promote global health education for young people. “They are extremely helpful to us in terms of speakers, student encouragement and connections for us,” said Sharon Crary, professor of chemistry and biochemistry and co-director of DePauw’s Global Health Program. Speakers are brought in to lecture students but also to present annually to faculty members from DePauw and other members of a consortium Tumaini has formed – Wabash College, Butler University and Thomas More University, where Kathleen Snell Jagger ’75, a Tumaini board member who taught microbiology and public health at DePauw from 1983 to 2002, recently spent a year as acting president.

Jeffrey G. Jones ’76, a physician and board member, said the foundation can teach young people that “we can use a tiny bit of our resources to help significantly in other parts of the world that don’t have so many resources. … We are rapidly getting to a place where you are a ‘have’ or a ‘have not.’ If you’re a ‘have,’ you’ve got no worries. If you’re a ‘have not,’ I’m not sure there’s that much difference between you and some other places we’re working in in the developing world. So these principles apply, regardless of where you are.”

Others on the Tumaini board are Eleanor “Elee” Northrup Hall ’61, Mote’s aunt; Kenrad Nelson ’54, a retired professor of epidemiology at Johns Hopkins University; Michael Christie ’74, a Nashville orthopedic surgeon; and Sajel Tremblay Nuwamanya ’12, a resident physician in Alabama. Burke is the only non-DePauw alum on the board.

“Why am I interested in a global health medical school? We need it! It would emphasize epidemiology and upstream medicine, serving underserved populations in the U.S. and abroad. … My commitment to this endeavor includes a major donation via my trust.”
– Eleanor "Elee" Northrop Hall '61, retired from a career in human resources and real estate

Mote studied zoology at DePauw, where “something like 28 relatives,” including his late parents, attended, and thought about becoming a physician but doubted that he’d get into medical school. So he spent a year working as an orderly in a Massachusetts hospital, a year studying graduate-level biology at Case-Western University and a year working as a research associate at the Indiana University School of Medicine. He returned to Case-Western for medical school, after which he did a surgery residency but was persuaded by friends to switch to anesthesiology. He practices at hospitals across metropolitan Indianapolis.

Mote said he’ll continue to strive to establish the medical school; he and his aunt have even included it in their wills. He is driven by hope and, when he was volunteering in Kenya, saw it all around him – in a book he read, on the posters then-Sen. Obama used to run for president, in the people he met.

“I just think hope makes a big, big difference,” he said. “You can get through a lot if you have hope.”

And that’s why his foundation is named “Tumaini.” That’s Swahili for “hope.”