The ‘dura mater’ handles medical training and motherhood with aplomb

For a while, the 2011 DePauw graduate described herself on Twitter as “ENT resident surgeon. Mother. … Nerd.” She recently swapped out a few descriptors for this: “Trailblazer. Health equity advocate.”

The handle: Fayson was attending a boot camp before starting medical school at Ohio State University, listening to a lecture about the coverings of the brain. “The thickest layer is called the ‘dura mater,’ and that means ‘tough mother,’” Fayson said. “My friend looked at me and said, ‘Shannon, you’re a dura mater.’ I’m like, I am a ‘dura mater.’ That name ever since then has stuck with me.” 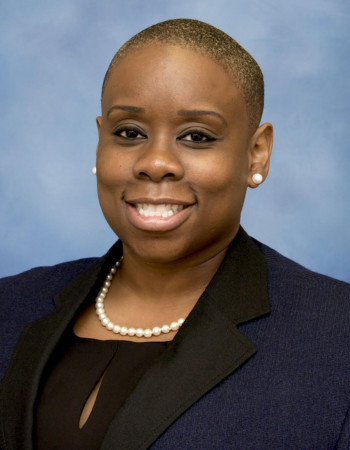 She’s a mother: Indeed, Fayson, an ear, nose and throat surgeon starting her third year of a five-year residency at Michigan Medicine, is the mother of 9-year-old Aiden, born on the first day of her senior year finals week at DePauw. The biochemistry major and philosophy minor had made arrangements with her professors to take her exams late and, upon returning home after a cesarean section, “it was studying time. One arm I had studying; the other arm, I was trying to breastfeed my son. Twenty-one years old. It was so overwhelming.”

Still, she did well on her finals, taken while friends watched the baby, and then, with her pastor caring for Aiden, “I walked on graduation day.”

“I’m in love with learning. As a physician I’m a lifelong learner. But I get so excited about learning new things. I’m giddy when I’m learning something new.”
– Shannon Fayson ’11

She’s tough: “I remember being nervous for Shannon as she was heading into that Chem 440 class, one of the toughest in the major. But I needn't have been,” said Dan Gurnon, associate professor of chemistry and biochemistry. “She sat right up front, always positive, always engaged, working as hard as she could, never asking for special treatment. In fact, the only time she mentioned her pregnancy in the context of classwork was when she told me it was likely she would go into labor sometime during finals week, and that we might need to reschedule the exam. Never before had I seen such a strong work ethic and positive attitude. She’s amazing. At the end of that semester I knew that, if medical school was what she wanted, she would get there.”

Two years later, Fayson was listening to a lecture about otolaryngogoly when “the little hairs on the back of my neck stood up.” She knew this was her specialty, but the speaker was a white man, and she wondered if a black woman could fit in. Immediately after the lecture, she googled “African-American otolaryngologists in Columbus, Ohio,” and learned that Minka Schofield was an associate professor of otolaryngology-head and neck surgery at Ohio State. “I was blown away. … She’s actually at my medical school!” Fayson said. “So I emailed her and got a visit set up with her to shadow in her clinic and the rest is history.”

Said Schofield: “Shannon is the epitome of resilience and persistence. … We worked together to devise the best pathway for her to be a competitive candidate to match in ENT (residency). This path was filled with blood, sweat and even tears.”

She’s a nerd: “I am such a nerd,” Fayson said. “I love science. I love band, so people call me a band geek. (A trumpet player since sixth grade, she was in the marching and symphonic bands in high school and the university band at DePauw and now plays in the life sciences orchestra at the University of Michigan.) I’m in love with learning. As a physician I’m a lifelong learner. But I get so excited about learning new things. I’m giddy when I’m learning something new.”

She’s a trailblazer: Fayson was already well known in social media for being “a unicorn. People know who I am just because I’m a black female in ENT at Michigan.” She encourages young women who want to emulate her or ask how a single mother can handle medical training. Then the TODAY show noticed, featuring her and two colleagues in a March story about women doctors “who are changing the field of surgery,” and “that really blew things up.”

She’s a health-equity advocate: “I change daily, especially during this experience with the COVID-19,” she said. “… I’m really shifting into this role where I’m learning about health disparities” that put people of color at higher risk of contracting the coronavirus, and she dreams of becoming “a world-renowned advocate for people of color in the medical field.

“That’s so exciting,” she said. “I’m actually going to add that to my Twitter handle.”

Top photo courtesy of University of Michigan Department of Surgery. Fayson is second from right.