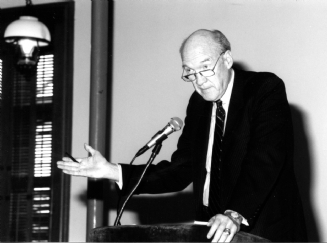 November 6, 1998, Greencastle, Ind. - "Politics is a contact sport," former United States Senator Alan K. Simpson told an audience at DePauw University this morning. Simpson, who is now director of the Institute of Politics at the Kennedy School of Government at Harvard University, offered "An Overview of Congress: Where You Stand Depends on Where You Sit" in Meharry Hall of historic East College.  As a politician, "You get your skin ripped off, but it grows back double strength.  You're on the cover of TIME magazine one week and doing time the next."

The Republican stated, "In politics there are no right answers --none -- Only a continuing flow of compromises between groups, resulting in a changing, cloudy and ambiguous series of public decisions where appetite and ambition compete openly with knowledge and wisdom.  That's politics, there is no other definition to it.  And it's sloppy, and it's crude, and it's silly, and it's bizarre, and it's squirrelly and stupid, but it works.  And you'd better be glad it does."

Simpson is the second of four Ubben lecturers during the 1998-99 academic year to speak at DePauw on the issue of "Ethics and Morality in Leadership." The first speaker of the series was David R. Gergen, former presidential adviser, journalist and political commentator, on October 14. The next two speakers will be scheduled during the spring semester.

Simpson is the author of a recently released book, Right in the Old Gazoo: A Lifetime of Scrapping with the Press, which chronicles his personal experiences with and views of the news media. During the spring semester of 1998, he was a visiting professor at Harvard's Joan Shorenstein Center of Press, Politics and Public Policy.

Simpson is a member of a political family; his father, Milward L. Simpson, served as both governor of Wyoming from 1954 to 1958 and US senator from Wyoming from 1962 to 1966. Simpson chose to follow in his father's footsteps and began his own political career in 1964 when he was elected to the Wyoming state legislature as a state representative of his native Park County. He served for the next 13 years in the Wyoming House of Representatives, holding offices of majority whip, majority floor leader and speaker pro-tem.

In 1978 Simpson ran for, and was elected to, the U.S. Senate. After a successful first term, he was re-elected in 1984 with 78 percent of the vote and then again in 1990 to a third term with 65 percent of the vote. Simpson was elected by his peers to the position of assistant Republican leader in 1984 and served in that capacity until 1994. He completed his final term on Jan. 3, 1997.

A native of Cody, Wyoming, Simpson received a Bachelor of Science in Law degree from the University of Wyoming in 1954. Upon graduation from college, he joined the Army and was commissioned a second lieutenant. He served overseas in the 5th Infantry Division and in the 2nd Armored Division in the final months of the Army Occupation in Germany. Following his honorable discharge in 1956, he returned to the University of Wyoming to complete his study of law and earned his Juris Doctorate degree in 1958. He is a third-generation lawyer in his family.

Simpson serves as a director of several corporations, including IDS American Express in Minneapolis and PacifiCorp in Portland, Ore. He is chairman of the board of trustees of the Buffalo Bill Historical Center in Cody, Wyoming, which comprises the Whitney Gallery of Western Art, Buffalo Bill Museum, The Plains Indian Museum and the Cody Firearms Museum. He also is a member of the Smithsonian National Board and Shakespeare Folger Library board of directors.