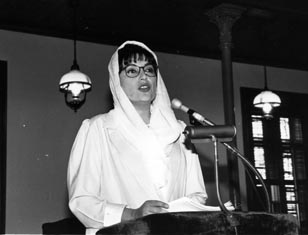 May 7, 1997, Greencastle, Ind. - "I see a third millennium in which the gap between rich and poor states narrows, where we attack literacy and promote human rights universally," Benazir Bhutto, former prime minister of Pakistan, told an audience at DePauw University today. The future Bhutto is also a world "where the birth of a girl child is celebrated as much as a boy child, where every child is planned, supported and educated."

The former prime minister discussed "Pakistan in the Third Millennium" in a 10 a.m. Timothy and Sharon Ubben Lecture in Meharry Hall of historic East College. The speech was followed by a question-and-answer session at 11 a.m. in the Center for Contemporary Media, Watson Forum. (at right: Bhutto with Professor Sunil Sahu at the Q&A session)

At age 35, Benazir Bhutto became the youngest chief executive in the world and the first prime minister in the Muslim world. From July 1977 to 1988 as a leader of the Pakistan People's Party, Bhutto waged a relentless struggle for the restoration of democracy and human rights in the country. She had been imprisoned under deplorable conditions for long years, witnessed the trauma of the hanging of her father in April 1979 and was exiled. While incarcerated, her life was constantly threatened by the authorities and also from illness. She was eventually forced into exile by the dictatorship. Throughout this extraordinary ordeal, she faced the oppression with courage and determination, never once backing away from her responsibility to her family, her country and the principles of democracy and human rights. 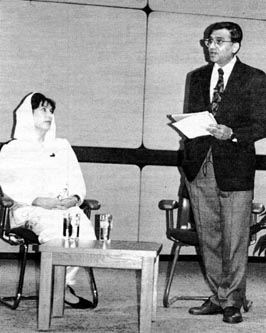 Arrested nine times and held in detention or in prison for more than five-and-a-half years, Bhutto became an international symbol as she led the fight for the restoration of democracy in Pakistan from her prison cell. Called the Movement for the Restoration of Democracy (MRD), the alliance mobilized the people to put pressure on the government to hold elections in the country and hand over power to the representatives of the people.

From exile, Mrs. Bhutto continued to guide the resistance to the military regime in Pakistan. While in exile she reorganized the internal structure of the Pakistan People's Party, strengthened the channels of communication between the leadership and the rank-and-file membership, and provided for consultation at the grass-roots level with the party cadres in the decision-making process. She returned from exile to Pakistan in April 1986 and was welcomed back with a reception that has no parallel in the contemporary history of South Asia.

The turning point in the country's political situation came with the death of General Zia-al-Haw in a plane crash in August 1988. General elections were held in Pakistan on November 16, 1988. The Pakistan People's Party won a majority of seats in the National Assembly and Bhutto was invited to form a government, thus beginning her first term as prime minister of Pakistan.

Declaring that "democracy was the best revenge," she decided to guide people from almost anarchy to the management of democracy. She acted forcefully to restore constitutional freedoms. She lifted the ban on students' and trade unions imposed under the military dictatorship, immediately restored freedom to the press and agreed to separation of the judiciary from the executive. During her 20 months as prime minister, the government built 8,000 public and secondary schools and electrified 4,600 villages throughout the country. 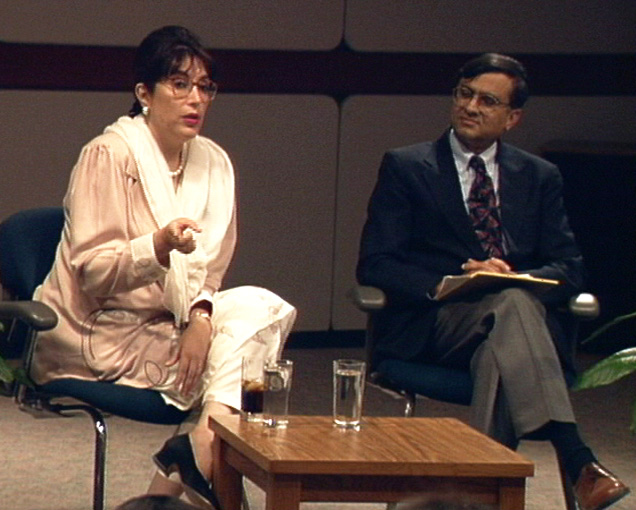 Although Bhutto was democratically elected prime minister with an overwhelming popular mandate to serve for a full five-year tenure, the entrenched institutions of dictatorship and martial law combined and plotted to bring down the people's government. On August 6, 1990, after having been in office for less than half of her tenure, President Ghulam Ishaq Khan unconstitutionally dismissed her government in what the international press called an "extraconstitutional coup." To ensure that the People's Party was not returned to power, the president and caretaker prime minister filed a series of references against Bhutto and her husband, who was arrested and imprisoned despite the fact that none of the charges could be proved.

Bhutto was the leader of the opposition from 1990 to 1993. Her party questioned the fairness of the October 1990 general elections until in July 1993 the president of Pakistan dismissed the government and called for fresh elections which Bhutto and the People's Party won. She began her second term as prime minister.

Bhutto was educated at Radcliffe College and at Lady Margaret Hall, Oxford. She is author of two books: Foreign Policy in Perspective (1978) and Daughter of Destiny (1988).