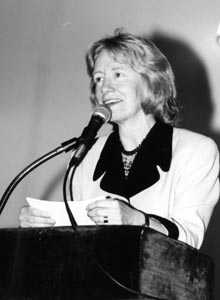 February 12, 1999, Greencastle, Ind. - In modern times and throughout history, Americans have sought the truth from their presidents, says Pulitzer Prize-winning historian and best-selling author Doris Kearns Goodwin. The author of books on the presidencies of Franklin D. Roosevelt, John F. Kennedy and Lyndon B. Johnson spoke at DePauw University today as part of a series of speakers on the issue of "Ethics and Morality in Leadership." Her Timothy and Sharon Ubben Lecture, "The Moral Authority of the Presidency," was delivered on the same day the U.S. Senate voted against the impeachment of President Bill Clinton.

President Lyndon B. Johnson was not truthful during the Vietnam war, Goodwin told the audience in Meharry Hall of historic East College, and his presidency was deeply wounded by that fact. Franklin De. Roosevelt, on the other hand, had an inherent ability to boost the morale of the American people, thereby creating a "linkage" that allowed President Roosevelt to "mobilize people to work together."

The scandal involving President Clinton and former White House intern Monica Lewinsky is not as groundbreaking as it may seem, says the historian. The White House has been the site of similar misconduct in the past; Goodwin says the difference in this case is that people are aware of it.

In her Ubben Lecture, Goodwin spoke of the "unconventional relationships" surrounding FDR: his affair with Lucy Mercer, the impact the tryst had on his marriage, and the resulting role Eleanor Roosevelt took in resolving domestic problems. Goodwin says the Roosevelts had what can be seen as a "historical partnership," given the revelations about Bill and Hillary Clinton.

"Unless there is a direct impact on leadership, a president should not be impeached," she said.

Last night, Doris Kearns Goodwin appeared live via satellite on MSNBC from DePauw's Center for Contemporary Media to discuss the Clinton impeachment trial. She said the case has a "partisan edge to it and that will take the sting of impeachment away."

Of DePauw, the historian declared, "I think it's a great-sized college. I think there's something strong to be said about a liberal arts school where you can get to know your teachers and speak up in class."

Goodwin appears regularly as a commentator on the NewsHour with Jim Lehrer on PBS, Nightline on ABC and various morning news shows. She also was the first woman journalist to enter the Red Sox locker room, and she has written numerous articles on politics and baseball for leading national publications.

A professor of government at Harvard University for 10 years, Goodwin's first brush with the Oval Office was while serving as an assistant to President Johnson during his last year in the White House. She later assisted Johnson in writing his memoirs and in 1976 wrote his biography, Lyndon Johnson and the American Dream, which was a Book-of-the-Month Club best-seller.

Next came The Fitzgeralds and the Kennedys, the story of two families whose lives shaped our times, winner of various awards and the basis for a six-hour miniseries on ABC in 1990. It was Goodwin's book on the Roosevelts, titled No Ordinary Time: Franklin and Eleanor Roosevelt: The Home Front During World War II, that received the Pulitzer Prize in History in 1995. This book was a New York Times best-seller for six months and also received the Harold Washington Literary Award, New England Bookseller Association Award, Ambassador Book Award and the Washington Monthly Book Award.

Goodwin's most recent work, the best-selling Wait Till Next Year: Summer Afternoons with My Father and Baseball, is a memoir of growing up on Long Island in love with her family and baseball in the 1950s and explores the influence of the Dodgers, Giants and Yankees.

She was a consultant and on-air person for PBS documentaries on LBJ, the Kennedy family, FDR and Ken Burns' Baseball. She earned a bachelor's degree with Phi Beta Kappa honors at Colby College and a doctorate in government at Harvard.

The noted historian is married to the writer Richard Goodwin, whose experience as the investigator who uncovered the quiz show scandals of the 1950s was depicted in the Academy Award-nominated movie Quiz Show.

Goodwin is the third of four Ubben Lecturers during the 1998-99 academic year to speak at DePauw on the issue of "Ethics and Morality in Leadership." Ubben Lecturers during the fall semester were David R. Gergen, former presidential adviser, journalist and political commentator; and Alan K. Simpson, former U.S. Senator from Wyoming and director of the Institute of Politics at the Kennedy School of Government at Harvard University.