[DOWNLOAD VIDEO: "The Value of Education" 876KB] "Schools like this are really the heart and soul of America," said Democratic presidential candidate General Wesley K. Clark (Ret.) tonight at DePauw University as he began a Timothy and Sharon Ubben Lecture, "Facing America's Challenges." "You're participating in an educational experience here that prepares you not only for your employment but for the kind of citizenry we need to protect this country: to keep it strong, to keep it free, and to keep it safe in the future."

The four-star general and former Supreme Allied Commander of NATO entered Neal Fieldhouse of DePauw's Lilly Center by walking through the crowd of 2,700, stopping to shake hands and greet the students, faculty, alumni and visitors he passed as he made his way to the stage.

Gen. Clark says America is "going through a period  of transition," and as he described the challenges the nation faces in its 'war on terror,' he said the origins of the problems we face today can be traced back to 1989, when the Berlin Wall fell. Clark says, from that point forward, America had no foreign policy strategy and was not proactive, only reacting to problems in the world's hot spots as they emerged.

[DOWNLOAD AUDIO: "Straying Off Course" 631KB] "President George H. Bush declared a new world order. But when we won the Cold War, we lost America's sense of direction in the world. We lost strategy, we lost our purpose for being in the world."

Clark is on the cover of the current Newsweek and is the first active presidential candidate to appear at DePauw in the University's 166-year history. He says America, a nation of immigrants, needs a policy of inclusiveness, of respecting international organizations and a strong military. "I put my life on the line for this country," said Clark, who was wounded in Vietnam.

[DOWNLOAD AUDIO: "A Last Resort" 1200KB] "I wouldn't want any other country to ever think they could outbuild us with the hope of someday outfighting us. But when it comes to protecting America's interests in the world, we've got a lot of other tools in our toolkit. We've got diplomacy, economics, international law, international organizations... we've got friends and allies around the world who'll help us. Please, understand -- and nobody knows this better than the men who've seen combat and the women who've seen bloodshed -- don't use force except as a last, last resort."

A critic of the war on Iraq before it began, Gen. Clark told his DePauw audience,

[DOWNLOAD AUDIO: "Iraq" 794KB] "The strategy of pre-emption -- the idea that we would attack Iraq and then topple all the dominoes throughout the Middle East -- I think you can see the problem with that strategy on the ground every day on the television news in Baghdad. You can see it in the request for the $87 billion, which is a down-payment on future requirements in Iraq." 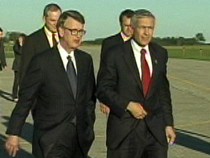 A few hours before the Ubben Lecture, as his plane landed at Putnam County Airport and was greeted by DePauw University President Robert G. Bottoms, General Clark said,

[DOWNLOAD AUDIO: "Clark on DePauw & Indiana" 913KB] "This is my first trip out to DePauw. I've heard it's a great school." Clark arrived as a new poll finds he "is tied with President George W. Bush in a head-to-head matchup," according to a story by the Associated Press. "Clark, a retired army general, garnered 49 per cent support to Bush's 46 per cent, which is essentially a tie given the poll's margin of error. The CNN-USA Today-Gallup poll was conducted September 19-21, beginning two days after Clark announced he would become the 10th Democratic candidate for the party's nomination."

[DOWNLOAD AUDIO: "The Poll Numbers" 585KB] "I think it reflects the people's opinion in this country," Clark said this afternoon upon his arrival. "As I've traveled around this country, even before I announced, I kept feeling this enormous hunger for straight-talking leadership. I think the American people are beginning to understand it's not gonna come from this administration. They're looking for new leadership, I think the poll numbers reflect that."

While at the airport, the general called President Bush's speech before the United Nations in New York today,

[DOWNLOAD AUDIO: "President's UN Speech" 1900KB] "one of these annual requirements... the President has caused a tremendous amount of problems for our allies, for our international organizations. He hasn't treated the United Nations and our allies with the kind of respect and brought them into the problem the way that he could've. Now he's gone and asked them for help. It's not surprising that it's very difficult for him to get the kind of help for our country that we need. And I think it shows that the administration's policy on Iraq and the way it's been conducted, with a very small coalition -- just the United States and Britain substantially -- has been faulty."

Later, in his Ubben Lecture, the general added,

[DOWNLOAD AUDIO: "Rebuilding Relationships" 401KB] "There are a number of pressing issues, and beyond the immediate crisis we have to rebuild our relationships with our allies. We have seriously damaged these relationships," he said to applause, adding,

[DOWNLOAD AUDIO: "Respecting Leadership" 1700KB] "We have to respect other leaders, just as we expect them to respect us. In a democracy, of course, we understand that our president reflects public opinion more or less -- I mean, he has to. If he doesn't, he's held accountable at the next election. It's no different in any democracy. So there's no point in being that angry at the French, because their president is more or less reflecting the opinion of the political class in France. The German Chancellor is reflecting the opinions, more or less, in Germany. And the American President has to understand he speaks to an audience that extends far beyond the borders of these United States. He has to be a world leader."

The general told the crowd that he'll be announcing details of his economic plan tomorrow in New York.

[DOWNLOAD AUDIO: "Job Loss Recovery" 773KB] "Here we are in what is a job loss recovery, and nobody knows that better than the people of Indiana. I read the papers today -- something like 88,000 jobs [lost] over the past two-and-a-half years in this state alone, despite the fact that there's economic growth. We've tripled the number of long-term unemployed in America."

Asked by students about the Patriot Act, Clark said the implications and effectiveness of the Act -- which he says he's read cover-to-cover three times and is still trying to make sense of -- must be carefully analyzed before, as Attorney General John Ashcroft hopes, its powers are expanded.

[DOWNLOAD AUDIO: "Patriot Act" 616KB] "Because when you're dealing with something like the Bill of Rights, it is so precious, it is so central to the this country that we must never allow an administration to abridge it without full, open and complete accountability to the American people."

General Clark, whose speech was interrupted many times by applause, offered this advice to students who may feel disenfranchised and that their vote means nothing.

Before wrapping up his Ubben Lecture, Clark urged the students who filled the gymnasium to dedicate at least part of their lives to public service.

[DOWNLOAD AUDIO: "The Power of Democracy" 2100KB] "There's nobody and there's no party in America that has a monopoly on wisdom. It takes dialogue and disagreement... And so, when you have a democracy you might have a pretty raucous set of discussions. But instead of the American public being worried because people don't always agree, we oughta celebrate that, because people have the courage to speak out. I encourage your generation to have that courage, to have that commitment and to care. And let one of your public services be that you vote, and another one be that you think about the issues, you look for the facts, and you listen to the -- well, what the political philosophers used to call -- the 'light of reason' to guide your dialogue rather than the heated emotions of talk radio."

[DOWNLOAD VIDEO: "I Won't Forget Greencastle" 660KB]Wesley Clark's day at DePauw included a dinner at the home of Dr. Bottoms, which was attended by alumni and friends of DePauw. After the Ubben Lecture, General Clark joined Ken Bode, Eugene S. Pulliam Distinguished Professor of Journalism, and about 200 students for a forum in Thompson Recital Hall of the Performing Arts Center.