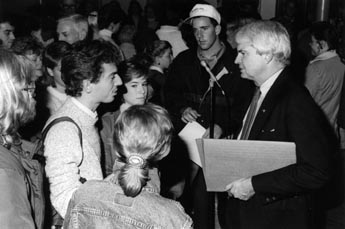 [Download Video: "Gov. Richard Lamm" - 874kb] "The miracles of modern medicine are simply outrunning the public's ability to pay for them," said Colorado Governor Richard D. Lamm as he presented the inaugural Timothy and Sharon Ubben Lecture at DePauw University. "You can't afford to do everything to everybody," he continued.  "So we have to make some decisions.  I know that that's difficult, but I also know that it's possible."

Lamm addressed the topic, "Health Care in the Age of Technology" in a speech at Meharry Hall of historic East College.

[Download Video: "Leaving a Legacy" - 1511kb] "To me, the issue in health care is not just a health care issue.  The bottom line question is, what kind of  world do we want to leave to our kids?"

The governor declared, "We spend more than a billion dollars a day for health care, but our bridges are falling down, our teachers are underpaid, our industrial plants are rusty."  He took on the overabundance of doctors and heroic efforts to save severely ill patients.  "We treat death as if it were optional," Lamm said.  "People talk about the right to die, as if we have the right to refuse to die.  Once we stop treating death as an enemy and recognize it as an inevitability, we can save massive resources.  We must look rationally at the phenomenal amount of resources we spend on the last few weeks of peoples' lives to only prolong suffering."

The Ubben Lecturer continued, "We are not wealthy enough to base our health care system on the assumption that we can give everything that genius has invented to all of the people out thee.  I believe clearly that the United States must ration medicine."

When he was elected governor of Colorado in 1974, TIME called Richard Lamm one of America's outstanding young leaders. In the past 12 years, his controversial stands on the tough issues facing Colorado and the nation earned the Democrat an international reputation.