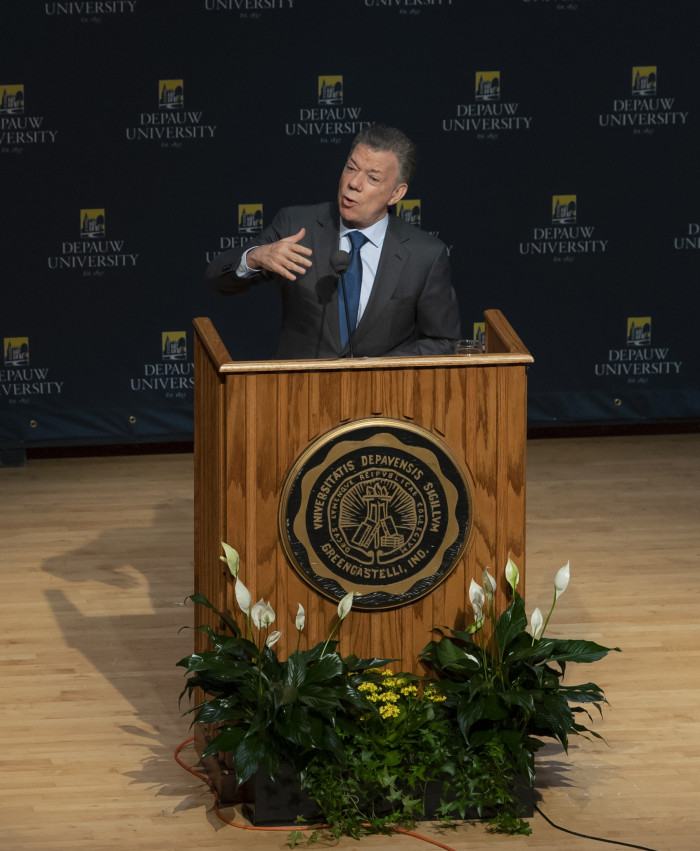 "The peace is not my peace. It is not the government's peace. It is the peace of all Colombians," Juan Manuel Santos, who won the 2016 Nobel Peace Prize for his efforts to end the more than half-century war in his native country, told an audience at DePauw University tonight.  In a Timothy and Sharon Ubben Lecture, "Global Citizenship: Now More Than Ever," Santos -- who served as president of Colombia from 2010 until August of this year -- described the difficult path that brought peace to his country, assessed the state of modern politics and a number of other topics, all the while offering lessons that apply to life.

"I am very honored and really grateful for the invitation that you have extended to me," the former president stated, and made it clear he was aware of previous Ubben Lecturers such as Margaret Thatcher. "Many very important people have come here to speak to you and I feel really flattered to have been invited."

"I come here to tell you a story," Santos said, "a story of making possible the impossible." 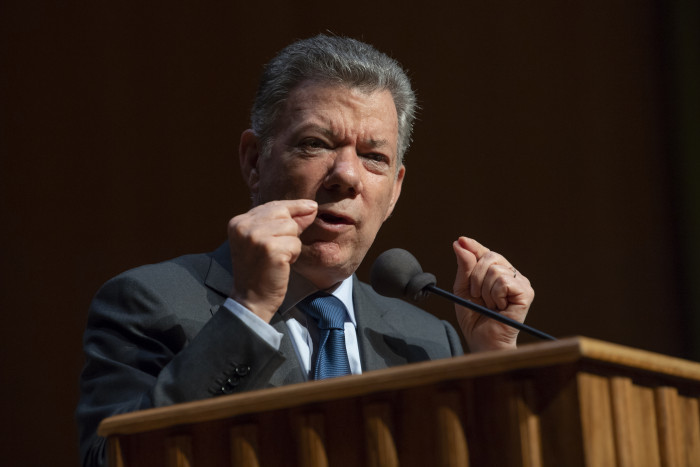 As a young recruit in Colombian Navy, Santos was taught how to sail by an officer who advised him, "You have to have a port of destiny.  When you have a port of destiny you can use the winds to get there, no matter how strong they are.  But if you don't know where you're going, sailing is going to be very difficult."

The Nobel laureate added, "That is applicable to all aspects of life -- in business, in your personal life."

Twenty years later, after he was appointed the Minister of Foreign Trade, he was told by leaders from other countries that Colombia could never thrive as a country until its nearly five decades long war with the Revolutionary Armed Forces of Colombia—People's Army (FARC) was brought to an end.

That was an about face for a former journalist who had entered politics as a hawk who supported war.  His poll numbers were very high and Santos was warned there was no upside to pushing for peace. "All of my advisers said, 'All of your predecessors failed, why should you insist on trying to make peace with these people?'  But I said, 'It's the only way to reach my port of destiny' and I decided to go a difficult path."

Santos described how he learned to use humor to disarm political foes such as Venezuela's Hugo Chávez, and said that there is a difference between viewing rivals as enemies as opposed to adversaries.  Enemies, the former president said, are people you want to destroy.  A Colombian general told Santos, "The adversaries, you need to beat them.  And they are human beings, and they are Colombians, and you will respect them and they will respect you." 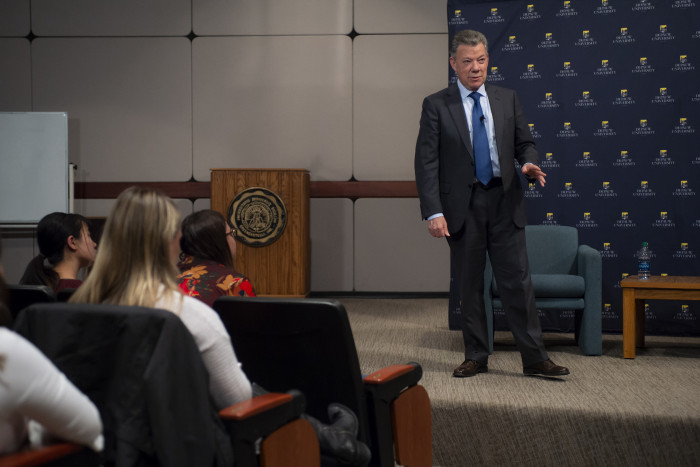 It's a difference, Santos asserted, between "making war and making peace."

In 2016, after six years of talks, Santos and FARC reached a ceasefire agreement. The deal needed to be ratified by Colombians in order to come into force, but -- with Hurricane Matthew causing flooding and disruption -- the referendum failed.

Santos called in those who led the opposition to the deal and said, "You said, you wanted peace but you wanted a different peace. Tell me what peace do you want?  Give me the list of what you object" to, he asked.  That was provided, he re-opened talks with the rebels, and the result was "a new and better agreement.  The Chinese proverb: there's always an opportunity in a crisis, in a problem, and that's what we did -- we tried to identify how to change things and bring a better outcome.  That was what happened in Colombia."

The peacemaking process is difficult.  Tougher still, Santos told the audience, is peace building.  Making war, he said, "is a very vertical type of leadership -- you give orders to your officers and to the people -- and you rally the forces around you."  On the other hand, "making peace requires a different type of leadership, more horizontal.  You don't give orders; you have to persuade.  You have to convince a mother who saw her daughter being sexually abused or killed to accept a legal benefit to the perpetrator, to forgive.  And that is very, very difficult.  But it is necessary." 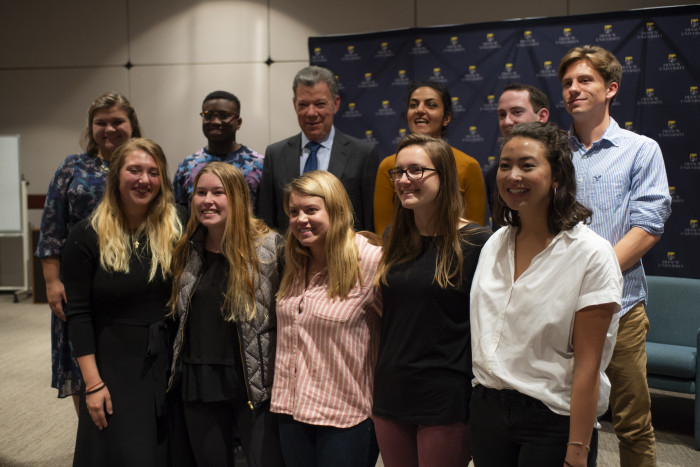 Santos says Columbia presently has an "imperfect peace because no peace is perfect because it's the product of a negotiation between human beings.  You give and take.  And the most difficult decision in any peace process is where you draw the line between peace and justice, and always in every peace process people from the right or from the left are dissatisfied -- some people who'd like more justice, some people who'd like more peace."

Santos, his voice shaking slightly, said, "What we have in Colombia is something very important.  For the last 55 years the parents buried their sons.  Now it's the sons and the daughters who bury their parents, as it should be." 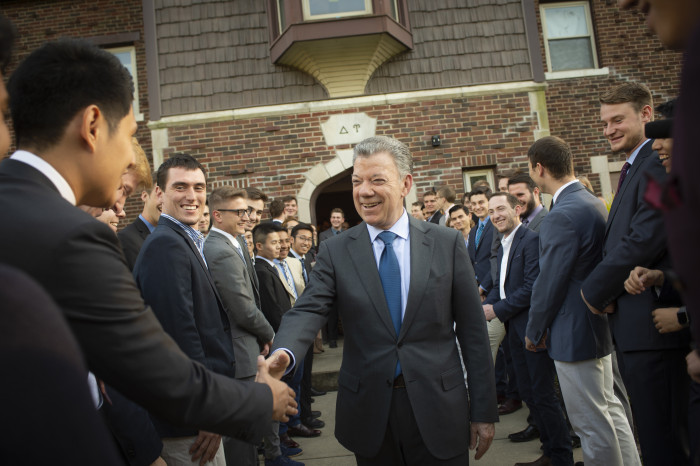 His day on campus began with a news conference, which was followed by a small forum with a group of about 40 DePauw students who spent 50 minutes asking questions of the man who left the presidency just two months ago.

On his way to a reception and dinner at The Elms, the home of DePauw's president, Santos made a stop at Delta Upsilon fraternity.  A member of DU as an undergraduate at the University of Kansas, the world leader was greeted by the leadership of the DePauw chapter house, shook hands with each and every chapter member (and hugged the house mother), and posed for a group photo on the front steps of the house.

During the question-and-answer session that followed his speech, Santos was asked about his Greek experience. He learned "the value of friendship, the value of personal relations, of reaching out, of compassion. The values that fraternity's teach you are values that will be with you all your life."

In response to a question about Venezuela, Santos called that country "my worst nightmare, and it still is. For me and for Colombia. We have more than one million Venezuelans already in Colombia and the number is increasing. It's a situation that is getting worse and worse and it's going to implode at some time." Efforts are ongoing to avoid that, but Santos says, "Venezuela is like a plane that ran out of fuel. That plane can have a soft landing or it can crash. It's in the benefit of everybody to try to have a soft landing [but that will require] the major stakeholders to be on board. And there are some major stakeholders in the Venezuelan problem that need to be addressed: China, Russia, Cuba, and the militias that are in Venezuela." 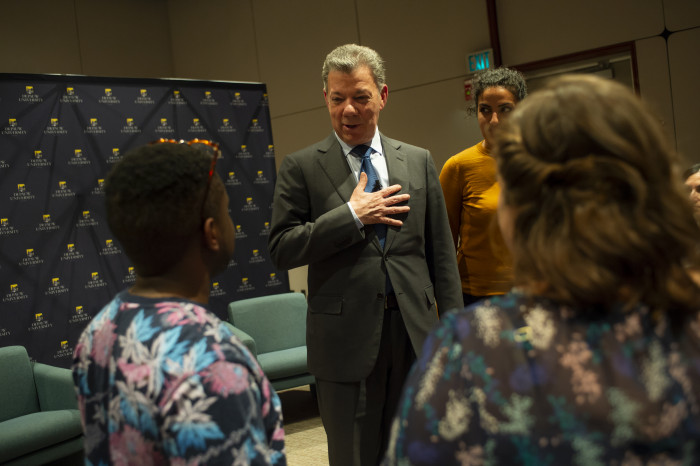 Asked about the contentious atmosphere that permeates today's politics, Santos cracked, "Do you have a more difficult question?," which elicited loud laughter from the audience.  "What is happening in the U.S. is happening all around the world, unfortunately," he said, growing serious.  The former president pointed to social media for creating a society that can get information only from a perspective they agree with, blocking out other perspectives and voices.

Santos says he had a conversation with Harvard University's president three days ago, who stressed the importance of teaching people "how to be quick to understand, but slow to judge.  That's a great phrase.  And I think we're doing the opposite.  We're being too quick in judging because we're using our emotions instead of arguments and reason.  And we must change that and try to encourage transactions.  Politics is about transactions ... I give you a bit, you give me a bit, but we're all better off in the end." 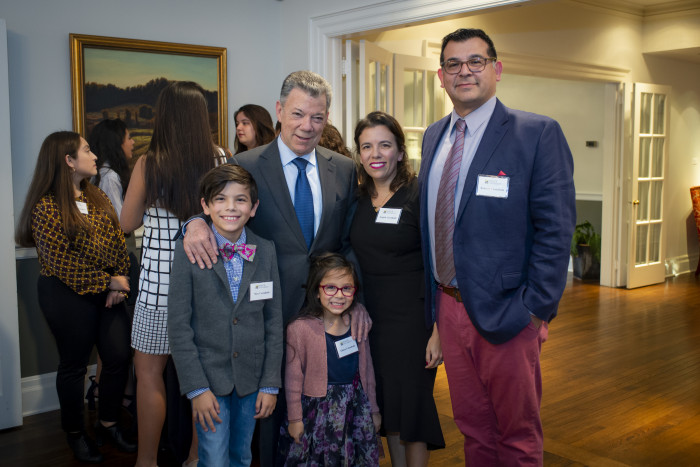 Santos continued, "If you convert politics into a zero sum game -- you take all or I take all -- there's no transaction, there's no synergy.  That's what we have to change. I don't have the magic formula, but I think it's in the hands of the young people, the students that understand that, to start this trend of recuperating those important values of good politics."

Before leaving the stage, the Nobel Peace Prize winner urged students to "never never forget the basic values and principles of life," which he compared to a map and a compass.  "When you're lost, use them.  They will always tell you where the right direction is."

Before coming to Greencastle, President Santos made a stop at the Indiana Statehouse, where he met with Governor Eric Holcomb.