[Download Video: "Science & Humanity" - 535kb] "It's a fascinating glimpse at a science that's moving faster than the regulations that govern it," science writer Rebecca Skloot told a standing room only crowd at DePauw University tonight.  Skloot is the author of the bestseller, The Immortal Life of Henrietta Lacks, which tells the story of how the cells of a woman who died nearly 60 years ago have launched medical breakthroughs and raised serious questions about science, ethics, research, race, class and history. "There's a lot of discussion now about what we can do," Skloot stated.

She visited DePauw as a guest of the Timothy and Sharon Ubben Lecture Series. Her presentation -- which blended readings from the book with comments from the author and a question-and-answer session with the audience -- took place in Moore Theatre of the Green Center for the Performing Arts.  The room was filled beyond capacity for the talk.

The Immortal Life of Henrietta Lacks tells the story of a poor resident of East Baltimore who contracted cervical cancer and was treated at Johns Hopkins Medical Center in 1951. Samples of  Lacks' tissue were taken without her knowledge. Named "HeLa" (short for Henrietta Lacks), the first "immortal" human cells grown in culture are still alive today.

[Download Video: "A Breakthrough" - 2336kb] "George Gey (a scientist at Johns Hopkins), along with scientists all over the world, had been trying for decades to grow human cells outside the body, in the lab, because they knew that if they could grow cells outside of the human body they could do things to the cells they could never do to humans, to understand what cells were, how they worked, what cancer was," Skloot noted tonight.  "And so people had been trying to grow cells.  They were taking them from anyone they could get their hands on, basically, for years, and the cells always died.  They'd last maybe a few weeks ... And for some reason, Henrietta's cells just never died." 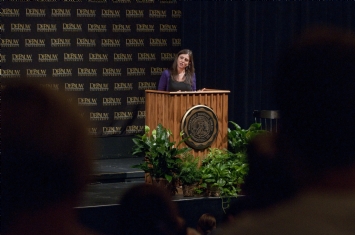 In fact, an estimated 50 million metric tons of HeLa cells have been grown, with a combined weight, says Skloot, of the equivalent of more than 150 Empire State Buildings. HeLa cells were vital in developing the polio vaccine; uncovered secrets of cancer, viruses, and the effects of the atom bomb; helped lead to important advances like in vitro fertilization, cloning, and gene mapping; were sent into space and have been bought and sold by the billions.

Henrietta Lacks died the same year she was diagnosed with the aggressive cancer that eventually killed her.  Her family didn't learn of her mother's unwitting contribution to science until the 1970s,  never saw any of the profit gleaned from the research done on her cells, and were unable to afford health insurance.

With the success of her book, which will become a film co-produced by Oprah Winfrey, Skloot has founded the Henrietta Lacks Foundation. It is, among other things, dedicated to providing the Lacks family aid and hopes to offer assistance to other African-Americans in need who are pursuing education in science and medicine.  Last month, the foundation awarded its first five grants to descendants of Ms. Lacks.

[Download Video: "Race and Cells" - 1728kb] "People didn't know that the cells had come from a black woman until the '70s, which is actually a really interesting part of the story," according to Skloot.  "Here you had a time period, the '50s, where black people could not go into restaurants, they couldn't use the same bathrooms and water fountains as white people, yet this one black woman's cells were being used to develop the polio vaccine, which saved millions of white people's lives." 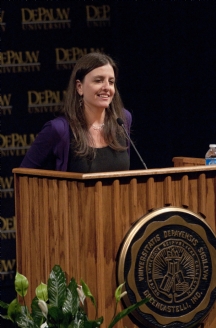 Around that same time, samples were collected from Lacks' children for purposes of research which was conducted without their knowledge; that would require consent today, says Skloot.  "But what happened with Henrietta is pretty much still legal," she says.  "As long as the tissues are removed from the body for some other purpose -- a biopsy, blood samples, testing -- as long as your name is removed from them, often those are stored and used in research.  You know, we sign a line on the consent form that says 'You can dispose of my tissues any way you see fit,' that often means they go into this pipeline for research.  Which is good.  We want this research to happen."

[Download Video: "Important to the Story" - 1633kb] "This is one of the things that's really important about this story is all of our vaccines, all of our sort of the future of medicine really depends on research on these tissues.  But, more and more, people are realizing this is happening without knowing in advance and people generally want to know.  So there's a lot of discussion going on right now -- should we require consent for all tissue research and should we tell people that someone may profit off of this and that they're not going to get any of the money."

[Download Audio: "Striking a Balance" - 169kb] "I honestly believe that soon it will be required to get consent for all tissue research and the big question now is, how to do that without inhibiting the science -- how to sort of get the human side of it caught up without slowing the science side of it down."

Skloot is a science writer whose work has appeared in the New York Times Magazine, O, The Oprah Magazine, Discover, Columbia Journalism Review, and many other publications. She is also a contributing editor at Popular Science magazine, and has worked as a correspondent for NPR's RadioLab and PBS' NOVA ScienceNOW.

The Immortal Life of Henrietta Lacks, her debut book, took more than a decade to research and write, and instantly became a New York Times bestseller (it has remained on the list since its release earlier this year and is currently #4). On August 10, Skloot was announced as the recipient of a 2010 Heartland Prize from the Chicago Tribune. 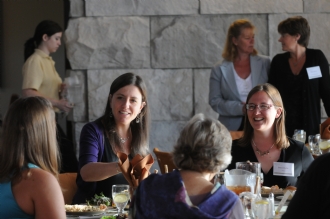 The seeds of the book can be traced to a general biology class Skloot took as a 16-year-old.  During a discussion of cell research, the teacher wrote the name "Henrietta Lacks" on the blackboard and briefly described her contribution to science.  Skloot wanted to learn more, and the teacher suggested she research the topic and turn in a paper for extra credit.

[Download Video: "A Classroom Moment" - 2137kb] "So then, years later when I got interested in writing the first thing that I thought to write about was this," Skloot told her DePauw audience, "and it's just been with me forever.  It's one of those -- you never know what little tiny moment in the classroom is gonna change your life.  It was another 10 years before I actually started writing the book from when I heard about it the first time.  And the funny thing is, when I finished the book I tracked down the teacher -- who is long retired -- and I sent him a copy of the manuscript before it came out, and attached a little note ... 'Here's my extra credit paper,'" she said to laughter.  "I think I almost gave him a heart attack." 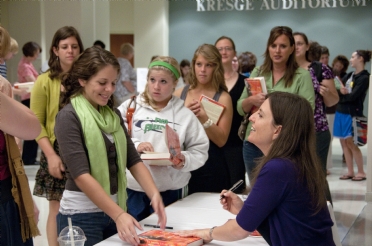 Skloot's day at DePauw began with an afternoon forum with students and faculty, which took place in Meharry Hall of historic East College.  The session was moderated by Bob Steele, Phyllis W. Nicholas Director of DePauw's Janet Prindle Institute for Ethics and Distinguished Professor of Journalism Ethics.  Steele and Skloot were joined on stage by Tamara Beauboeuf, associate professor of education studies and sociology and chair of the education studies department; Dana Dudle, associate professor of biology; and Kevin Moore, professor of psychology and director of the Honor Scholar Program.  The professors and students in the audience spent an hour discussing Skloot's work with the author.

Skloot was again joined by students and faculty at a dinner (seen above), which took place at the Prindle Institute.  The Ubben Lecture followed and Skloot was greeted by a long line of students, alumni, faculty, staff and local residents at a book signing in the Great Hall of the Green Center following her presentation. 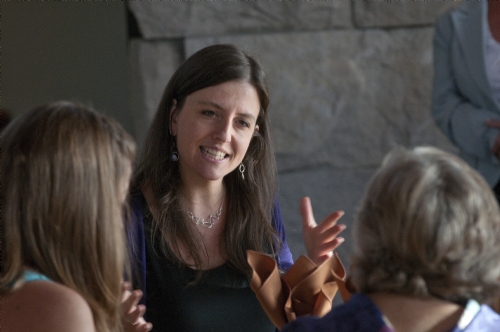 Dr. Dudle, who introduced Skloot at the lecture, called her book an examination of the "unintended consequences and human costs of scientific progress."

[Download Video: "A Really Special School" - 1,304kb] "I've had a really great time here," Skloot exclaimed during her evening speech.  Looking over the venue which was filled to the brim, she added, "This is a really special school.  You know, I visit a lot of schools and one of the things that struck me immediately when I got here was it feels like a very familial place -- you guys feel like family to each other.  And there's this comfort level here, I feel like I just walked into your living room.  So it's been really fun to just sort of see that around campus and to watch everybody interact and to get great questions from students," the author asserted.