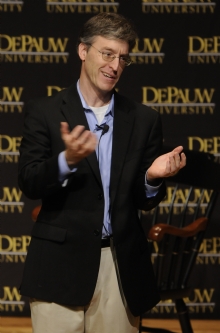 [Download Video: "Questioning CW" - 113kb] "A lot of what I do makes fun of people who fall prey to conventional wisdom," economist and bestselling author Steven D. Levitt told an audience at DePauw University tonight. In a Timothy and Sharon Ubben Lecture, the author of the new book, SuperFreakonomics: Global Cooling, Patriotic Prostitutes, and Why Suicide Bombers Should Buy Life Insurance, declared, "I think often the conventional wisdom is wrong. And when you think about it, you know that."

About 900 people gathered in the Green Center for the Performing Arts' Kresge Auditorium to hear from Levitt, whose first book with collaborator Stephen J. Dubner, Freakonomics: A Rogue Economist Explores the Hidden Side of Everything, spent more than 2 years on the bestseller lists and sold more than 4 million copies in 35 languages. In their "freakquel," SuperFreakonomics, released last month, the men again "crunch numbers about mundane topics to reveal interesting, unexpected conclusions," according to the Associated Press. "That's how we get answers to questions we never thought to ask."

Those questions include: What's more dangerous, driving drunk or walking drunk? Can a sex change boost your salary? And, which adds more value: a pimp or a Realtor?

[Download Video: "Getting Started" - 2106kb] "What I decided to do early on was I said I should just take risks, and I should just study whatever is interesting to me," says Levitt, who joked of how his poor math skills hampered his early efforts at becoming an economist. Now the William B. Ogden Distinguished Service Professor of Economics at the University of Chicago, where he directs the Becker Center on Chicago Price Theory, Levitt recalls asking himself, "Well, what am I interested in? I kind of reflected, and the only thing I could think of was, well my favorite TV show was Cops ... I said, maybe I should write about crime, 'cause that's actually something I'd like to read and study. So that's what I started doing; I started saying, 'How can I apply economics to crime?' And I wrote about 10 or 15 papers, eventually I wrote this paper about abortion and crime that got a lot of attention, and that's kind of been my strategy all along -- not to worry about whether anybody's gonna laugh at me at the end of the day when I study things like sumo wrestling ... but just what I find personally interesting."

As he prowled the stage, speaking without any notes, Levitt added, "I think I've been very lucky that kind of my own weird tastes in economics turned out to be one that other people kind of find strangely interesting as well."

In 2004, Levitt was awarded the John Bates Clark Medal, awarded to the most influential economist under the age of 40. In 2006, he was named one of TIME magazine's "100 People Who Shape Our World." 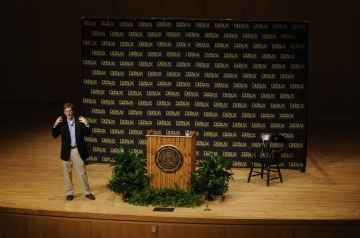 SuperFreakonomics and its authors have come under fire for a chapter on "Global Cooling," in which they tested the notion that reducing greenhouse gases is the best route to mitigating the earth's rising temperature. He and Dubner set a goal,

[Download Video: "Combining Science & Economics" - 1422kb] "Let's see, if you put together the science with economics, what conclusions that takes you to. I don't think that's currently what's being done. What's currently being done is there's a science part, and then there's this moral-ethical part, which I think Al Gore kind of epitomizes more than anyone, right, where you say, 'Mankind has wronged the planet and the only moral thing to do is to stop producing carbon,' OK? That is a combination of a scientific notion with a moral argument. And kind of the premise of what I do on any topic is I say, if you strip away the moralism, what's the right answer from kind of an efficiency perspective."

Levitt and Dubner contend that a reduction in carbon dioxide emissions would take years to impact global warming, assuming all nations of the world could agree on and abide by a plan to reduce the use of fossil fuels. They argue that a quicker and more cost-effective solution could be found through geo-engineering -- perhaps by increasing the reflectivity of oceanic clouds or diminishing solar radiation by spraying sulfur dioxide into the stratosphere. 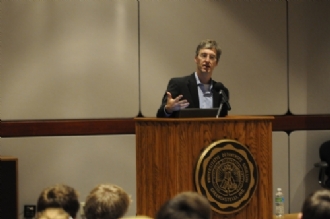 [Download Video: "More on Global Cooling" - 2108kb] "I don't know if these are the exact right solutions," Dr. Levitt said tonight. "The thing is, if they don't work you can stop 'em and within a year any trace that you ever had them will likely be gone. What I find amazing is the amount of anger and hatred and really lies, too, to be honest, that have been aimed at us for having been the messenger on these ideas by the environmental movement." The economist adds, "The attacks are not really necessarily about thinking that the solutions won't work, it's the idea that they're the wrong kind of solutions. The undertone is that mankind needs to suffer, and it's not fair if mankind causes all of these problems for the planet, and that we use technology to wiggle out of it without having to suffer for it." Levitt continued, "If you talk to Al Gore in a candid moment, he would tell you that if there's not suffering then the solution isn't appropriate."

On another hot-button issue -- America's war on drugs -- Levitt offered,

[Download Video: "The Supply Dilemma" - 974kb] "You can't fight that problem by restricting supply, because the more you shrink supply, the more price goes up which encourages other suppliers to come in. My belief, having looked at it, is that our current strategy towards drug prohibition, which emphasizes Draconian punishments on producers, is a policy that is destined to fail." (at right: Levitt at an afternoon student forum)

Levitt argues that a better solution -- but certainly not an easy one -- would be to severely crack down on users of illegal narcotics.

[Download Video: "Another Solution" - 1411kb] "It's simple. I mean, if you have incredibly harsh punishments on users you will reduce drug use dramatically. Imagine that if you got caught with marijuana -- any amount of marijuana -- you were executed on the spot. OK? Marijuana use would go way down. You wouldn't have to execute that many people, right, it might be pretty efficient," he said to chuckles from the audience. "But we don't like that; that's not a policy that Americans like. So I think what we're left with is -- the other choice we have if we don't like the stuff that goes with illegal drugs, like violence, is some kind of legalization. Now I'm not sure if that's necessarily a great idea, either," but it is a concept that could be tested in a few states, the professor said.

Steve Levitt's day at DePauw began with a student forum which produced a packed house in Watson Forum of the Pulliam Center for Contemporary Media. He met with WGRE student journalists (seen at left), and then attended a reception with senior economics major at The Elms, the home of DePauw President Brian W. Casey. 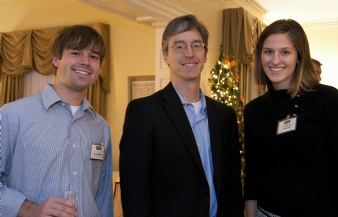 In the question-and-answer session that followed his remarks, Levitt was asked about the decision by Bill Belichick, head coach of the NFL's New England Patriots, in a November 15 game versus the Indianapolis Colts. Belichick -- whose team was leading 34-28 with 2:08 to play -- opted not to punt on 4th and 2 from his own 28 yard line. The Patriots were unsuccessful in getting a first down, turned the ball over, and the Colts mounted a game-winning drive.

Levitt cited research by David Romer of at the University of California-Berkeley, which he says supports Belichick's decision. In fact, Levitt says the judgment actually increased the Patriots' chances of winning the game by about 7%, given the probabilities involved. Monday morning quarterbacks had a field day questioning Belichick. 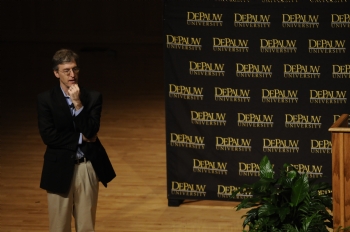 [Download Video: "The Right Call" - 1812kb] "Let's just say he went for it and he made it," Levitt offered. "Would you have come up here and asked me the question about was it a good... no, he woud've gotten no credit. So it's what economists call a principal-agent problem," he said. "The sports fans want you to win the game, but the agent cares about winning the game and also about his own reputation. In this particular case, Belichick will pay the price until the end of time for having made this bad decision, even though it was a right decision according to the data. I have tremendous respect for him that he must have known, he's smart enough to know that if it failed he would be the goat 'til the end of time, but he was willing to pay that price because he thought it was the right thing to do for his team. That's why I think people should have immense respect for Bill Belichick because he did something which he had to know was bad for himself personally, but which he correctly thought was the right thing to do for the team."

The 90-minute program was followed by a book signing session in the Great Hall of the Green Center.