[Download Video: "Rundgren on the Art of Music" - 664kb] "Music as a career is always a longshot," legendary singer, songwriter and producer Todd Rundgren told an audience at DePauw University tonight. In his Timothy and Sharon Ubben Lecture, "Music, Technology and Risk-Taking," Rundgren offered, "the worst thing that can happen is you trade your love of music along the way for the success of trying to capitalize off of the music." (photo: Alex Turco '10)

Rundgren is the producer of dozens of albums for other artists, including Hall & Oates, Meat Loaf and Patti Smith, and has remained an active recording artist himself since 1968. A video recapping some of Rundgren's career highlights was played before he took the stage.

In his presentation in Kresge Auditorium of DePauw's Green Center for the Performing Arts, Rundgren discussed his work in the music business -- including his media-driven feud with John Lennon in the 1970s and his thoughts on the industry today -- as well as his work as a software developer and music video pioneer.

The lecture was Rundgren's first in the Midwest. He regularly speaks at music industry and technology conferences on the coasts.

In a discussion with Ken Owen '82, executive director of media relations and coordinator of the Ubben Lecture Series, Rundgren ruminated on how he left the seminal prog-pop band Nazz, became an engineer, and eventually released the solo albums Runt and Ballad of Todd Rundgren. He called his early recordings "a phase I needed to go through, but it wasn't the destination." By the time Something/Anything?, his all-time best-selling album, was released in 1972, "I was becoming formulaic," Rundgren told the audience, noting that his hit, "I Saw The Light" was penned in just 15 minutes. "The song form that I had developed on the previous album became habitual."

There were some experimental flourishes on Something/Anything?, Rundgren reminded his audience, and he explored those alternative styles and sounds with abandon on A Wizard, A True Star and the albums that followed. Rundgren says he stopped viewing albums as a collection of 5-to-6 songs gathered on a side of vinyl to a blank canvas that could be numerous fragments or one prolonged piece, perhaps containing a pastiche of music and ambient sound snippets. "I started trying to map the relative chaos in my head -- all the different musical fragments and all the directions they might go into -- onto this blank canvas." 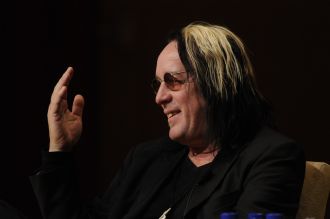 Initiation and its Egyptology and Faithful, which featured a side of note-for-note remakes of classic songs originally recorded by others, confounded critics and fans alike. Even Rundgren's latest record, Arena, is guitar-heavy anthemic rock that would sound at home on late '70s radio. What has caused Rundgren to defy expectations, time and again?

[Download Video: "Driving Force" - 1522kb] "It isn't rebellion, per se. It's like what have you got to lose by taking the chance at the time," he said with a laugh.

Rundgren was a red hot producer of other artists, which became his main source of income and afforded him artistic liberties other musicians did not enjoy. "It's been fortunate for me that I've had the production to underwrite my lifestyle because that frees me when I make a record not to have to consider whether I will be required to survive off that record. I never am."

Rundgren discussed how his work led to the creation of an early computer graphics paint-box program, and how his No World Order, the world's first interactive music album, allowed users to dip into a database of snippets to create customized musical experiences to fit their mood. 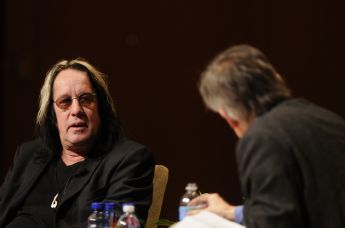 In the early 1990s. Rundgren was called upon by the Warner Full Service cable network, which expressed interest in putting music on a database, which cable customers could draw from for a monthly fee.

[Download Audio: "The Subscription Model" - 185kb] "The end result was that they refused to put their stuff on a server, refused to consider putting their stuff on a server, and within like 3 years Napster was eating their lunch. And they are so slow on picking up on this thing that to this day they haven't caught up; to this day somebody else, besides the record labels, has had to take the initiative," Rundgren told the DePauw audience. (photo at left: Alex Turco '10)

Rundgren says music has historically been a service, and it was not until Thomas Edison invented the phonograph record that music came to be regarded as a product. In the days before record players, musicians buttered their bread performing for audiences, not waiting for royalty checks on platters they were selling. 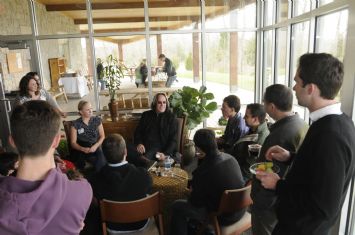 [Download Video: "Playing" - 869kb] "Before there was ever a record industry and long after there is whatever this stage the record industry is going through, musicians will make their living playing music -- they'll play it for people and people will come to hear it," Rundgren declared. "The best music that will be made will done in a live context. People will do their best to reproduce that good music in a recording context, but that's part of the challenge," and will be an increasingly insignificant part of an artists' business model, he says.

As a producer, Rundgren has helmed projects for the Psychedelic Furs, XTC, Fanny, New York Dolls, Grand Funk Railroad, Alice Cooper and Cheap Trick, as well as Meat Loaf's Bat Out of Hell, the #9 all-time best-selling record worldwide (on which he also plays lead guitar). His latest project, the new album by the New York Dolls, hits stores next month.

[Download Video: "Rundgren on Producing" - 1622kb] "Here's what I tell every act that I produce: The label wants you to come up with a single. Nobody knows what the hell a single is; a hit single was something that happened. You can't say something's a hit single before it happens. They may speculate it is and make all their best efforts to make it be a hit single, but the problem is, if you do a song just for the sake of it being a single and you don't fully believe in it and it doesn't become a hit, then you've got [it] staring you in the face for the rest of your career. You know, you did something that you didn't really feel that good about because you thought someone was gonna turn it into gold," Rundgren chuckled. "You don't focus on the singles, you make the best songs you can."

Rundgren grew up at a time when the Beatles were invading America, which stoked his interest in music and learning guitar, and seeing the film Forbidden Planet as a child made him long for a robot for friendship and protection, creating an early fascination with technology. In his lifetime, he has seen amazing change.

[Download Video: "The Pace of Change" - 920kb] "It's like the discovery of electricity again," he noted. "All of these things we take for granted now -- the ubiquitous communication that we have -- that did not exist 50 years ago."

The man who's been called "rock's Renaissance man" and is viewed as a technology-embracing maverick likely surprised some in the crowd when he exclaimed,

[Download Video: "Todd's 'No' List" - 2712kb] "I don't own a cell phone, I don't Tweet, I don't blog, I think the automobile is one of the biggest mistakes humankind has ever made and I would love to see some way to ameliorate that," Rundgren said. "I'm getting to a point now where I want certain technologies to disappear, as opposed to new ones appear. Maybe that's just me becoming old and crotchety," the 60-year-old performer said. "When I imagine the future, I don't imagine immediate boons from these things. The reason why I don't own a cell phone and the reason why I don't Tweet and the reason why I don't blog have nothing to do with the technologies; it has to do with the kind of behaviors that it elicits in other human beings that I just don't want to have anything to do with. Some anonymous clown who will say things he would never say to your face just because he's got a keyboard and a remote connection." 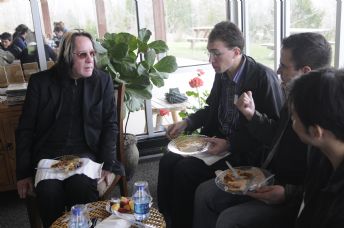 The composer of such hits as "Hello It's Me," "Can We Still Be Friends" and "Bang The Drum All Day" encouraged DePauw students to put their convictions and hard work into whatever they choose to do with their lives.

[Download Video: "Making the Effort" - 1104kb] "I want my material to at least mean something to me and effort increases the value of things. Things that you don't put any effort into don't have any value, so just the effort of coming up with new directions for me revaluates what I'm trying to do," Rundgren said.

[Download Video: "Rundgren's Legacy" - 2908kb] "The only thing I want out of this is to be able to look back on what I've done and, as I say, feel like I made an attempt at the time, that I wasn't shuckin', that I wasn't trying to do something because I thought I had a better idea of what somebody else wanted," Rundgren told the crowd. "I have always been willing to just let the audience be the arbiter, and if they don't respond to what I do I'll go back to that other thing or I'll find some other thing to do. But my response to that rejection is not going to be 'Oh what do you want,' you know?" 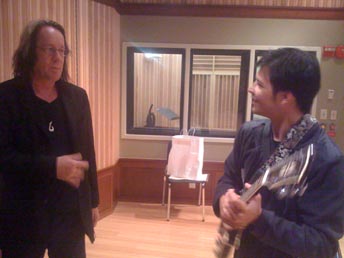 Todd Rundgren's day at DePauw began with a visit to student radio station WGRE, where he was interviewed and met with the staff. He then attended a barbecue with approximately 25 DePauw students at the Ian and Mimi Roland Welcome and Activities Center in the DePauw Nature Park. As a photo above illustrates, the undergraduates had an opportunity to talk with Rundgren individually and in small groups for more than an hour. After his Ubben Lecture, Rundgren visited the new recording studio in the Green Center and listened to a recording by sophomore Seth Tsui (seen at right).

[Download Video: "A Reflective Rundgren" - 880kb] "It's not going to make you friends, just being a musician. It may make you a lot of enemies," joked Rundgren, who came to DePauw on a night off from his current concert tour to support Arena. "At the same time, I have no regrets about it. I knew early on I was a musician and I feel fortunate that I'm making a living at it at this particular age, and I don't plan to quit," he said to applause.