Chuck Iikubo '57 Brings Message of Peace from Japan Across USA 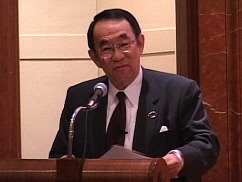 [DOWNLOAD AUDIO: "Beam of Light" 135KB] "I'd like to reaffirm the friendship and mutual understanding between our two great nations, especially in the midst of darkness... that our gesture of goodwill as expressed in the spirit of A50 will be a small beam of light." That was the message Hirotsugu "Chuck" Iikubo brought to the Indiana War Memorial tonight, a day after the terrorist attacks on American targets.

Born in Japan, educated at DePauw (where he is a member of the Board of Trustees), and now the chairman and CEO of a successful Japanese corporation, Iikubo is the force behind A50, an effort to express appreciation to the people of America for the many contributions 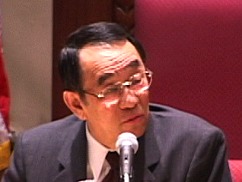 the United States has made to Japan since the signing of the San Francisco Peace Treaty fifty years ago. Iikubo and fellow A50 caravan members Masayuki Tadakoro and Tomomi Sukagawa comprise one of fifteen 3 member teams that were scheduled to visit 34 American cities and spread the message of thanks and goodwill. However, because of the stoppage of air traffic prompted by the terrorist attacks, a number of the early visits have had to be canceled.

[DOWNLOAD AUDIO: "Sharing Responsibility" 136KB] "I sincerely hope the amicable relations of two great countries with extremely different backgrounds will work together toward providing stability in the world, while respecting each other's dignity and sharing the responsibility," 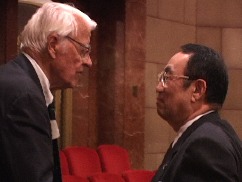 On hand for the ceremony at the Memorial, and again in the evening at an appreciation dinner at Eli Lilly and Company's Corporate Center, was former Indiana Governor and former U.S. Ambassador to Singapore Robert Orr (seen with Iikubo in photo at left). In the summer of 1993, Orr was dining at Mr. Iikubo's home when the Governor said he will always drive a Subaru car made in Indiana, to show his appreciation for the company's decision to build a plant in the Hoosier State during Orr's tenure. That conversation, says Iikubo, planted the seeds that became A50.

Iikubo's dream of thanking the United States was realized in a ceremony in Tokyo on September 8th, where former vice president (and fellow DePauw alumnus) Dan Quayle represented the U.S.A. and formally accepted Japan's expression of thanks.

[DOWNLOAD AUDIO: "Naturalized Hoosier" 94KB] "Indiana is my second home, and I consider myself a 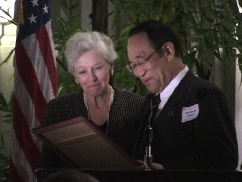 Indiana's First Lady, Judy O'Bannon was on hand for the appreciation dinner, and accepted the formal "thank you" from Iikubo and his caravan colleagues. Mrs. O'Bannon noted that the world becomes a better place when people make individual efforts to reach out to others, noting,

[DOWNLOAD AUDIO: "Chuck's Wisdom" 151KB] "one of Chuck Iikubo's charms and wisdoms is that he knows that. That it's not impersonal things that make changes in this world. But it's one person to another; it's one person's wonderful smile and charm."